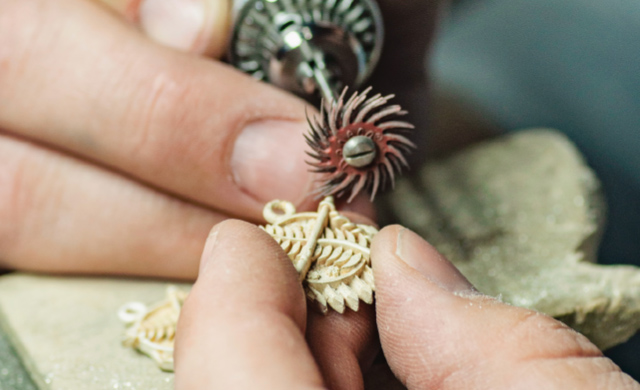 Bryan Worthley started designing jewelry for himself, because the men’s accessory market was made of either high-end designer pieces or “cheesy skulls,” without much in the middle. He now owns Trove Jewelry Co., and he designs jewelry that he describes as “rugged, aged-looking pieces that are not as refined as fine jewelry, but still high-quality.”

His work has caught celebrity attention. “I was working at an art show in Tulsa. My brothers started talking to a guy, and I thought, from his conversation, that he was one of the backstage roadies for the band playing in the arena,” Bryan said. “He bought some of my jewelry for himself, and then he said he was also buying gifts for Kenny Chesney and Jake Owens. As he was leaving, he handed me some concert tickets to come see him perform. It was Chase Rice! Although I didn’t recognize his face, I knew some of his songs.”

Chase Rice, country music performer, purchased an anchor pendant and a cannon pendant from Bryan to add to the dog tag necklace that he regularly wears to honor his late father, a military man. The anchor and canon are seen in several photographs of Chase Rice and made the cover of one of his singles.

It was an exciting and flattering moment for the artisan, who takes satisfaction in creating silver jewelry that is meaningful. Bryan enjoys designing signature pieces that symbolize a cause or serve as a daily reminder for people. One customer asked for the canon piece to be custom-designed into a cigar cutter on the end, and that has become a popular request in his men’s line. Last year, he added a women’s line of birthstone charms and “grandma monograms” under the name Sentiment Silver Works.

Bryan initially became involved with jewelry design in high school when he was making seed bead and hemp necklaces for his friends. During college, he worked at a Texas jewelry store called Gholson Originals. The owner taught him much about the craft of jewelry-making, and Bryan began investing in equipment. He moved to Oklahoma City, and then Edmond, where he set up his studio.

“I didn’t have my style nailed down at that point, but I was creating prototypes and starting to sell at art shows. I won’t say I was a starving artist, because I’ve been too blessed— but I did design my trade show booth to fit in one half of my truck’s camper shell. I slept in the other half so that I wouldn’t have to buy a hotel room.”

Over the last eight years, Bryan has gradually increased his online sales. Although he still takes on odd jobs, he’s basically designing jewelry full-time out of his studio. “It’s a barn that I basically work and live out of—but I’d like to open a storefront studio soon.” In the meantime, he’s using the quiet time at his workbench to listen to audio books and watch documentaries about creativity and business practices.

“My customers always comment that my designs are different than commercial products and very affordable. More men, and not just bikers, are accessorizing with necklaces, bracelets, rings, and occupational charms. They want significant pieces that make a statement. Doors keep opening up for me, and honestly, it’s because I’m making stuff that I would want to wear.” 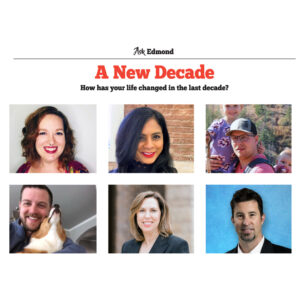 Ask Edmond: A Look Back at the Decade

by Edmond Outlook
Mandy Neahring Long Associate Project Manager at CFS Brands I have gotten married and became an instant mom, found sobriety, became a Nana, bought a house, started my MBA. My whole life has changed. Sara Knudsen Realtor/Advisor, Engel & Völkers OKC In the first part of the decade, I continued my stint as a stay-at-home mom....
Read More  > 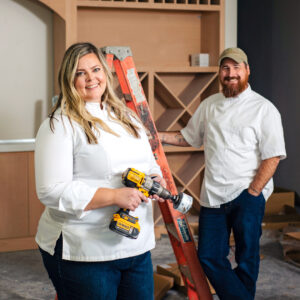 by Edmond Outlook
Farm-to-table cooking achieves a whole new level of freshness when you actually own the farm–and a whole new level of flavor when you farm responsibly. Who knew that raising livestock in a sustainable, humane and environmentally respectful way not only rewards your conscience but your palate as well? Get ready, Edmond, for a locally sourced...
Read More  >