The Iridescent Life of Kristy Gammill

There’s something special going on in Kristy Gammill’s home. She spends the majority of her day tucked away in her dining room, but she isn’t busy folding napkins and neatly setting a table with expensive china. Kristy is painting a totally different picture. As you enter her home, bright colors instantly catch your eye. Centered on the floor of the entry way is a large rug full of red, pink, green and orange circles. To your left is the nucleus of the home—the place where all the magic happens. The walls are covered with shadow boxes filled with small inspirational items. Kristy has transformed her dining room into her personal studio and right now, she’s working hard on a new project. The untitled painting is sitting on an easel waiting to be completed. It’s another colorful piece that resembles a textured fabric that would fit perfectly with Diane Von Furstenberg’s collection. Instead of hovering over the unfinished project, Kristy is taking a breather to focus on its direction. She says that this is an important part of her creative process.

“If I look at it took long and don’t walk away, I’ll end up painting over it.” This new untitled masterpiece is too good for that. Luckily, her day allows for enough walk-away time. Kristy’s painting schedule revolves around two things: inspiration and her new nine-month-old son. “Creativity hits at weird times,” she says. The mother-of-four finds herself painting whenever inspiration hits—which can be early morning or late in the evening. Having a dining-room studio fits her life perfectly. “There was an option to have a studio outside of my home, but I would never get over there, especially with a baby.”

The past couple of years have been a whirlwind for Kristy. The launch of her website turned her work into an instant hot commodity. Two years ago, a customer saw her artwork repinned on the popular social media network Pinterest, and headed to Kristy’s website and purchased an item. Now, this wasn’t just any client; it happened to be former X-Men star and fashion model Rebecca Romijn. It was a moment that taught Kristy about the power of a good website and just how vivid your dreams can be when they’re fully realized in color.

“This wouldn’t have happened without the Internet,” she says confidently. “It’s been the key to my success.” It has allowed Kristy to live out her dream of being a world-renowned artist without having to sacrifice her home and foundation by moving to a different city. In fact, she believes that admirers have a greater appreciation of her work because she stays true to her Edmond roots. “I think that, especially in art, people like variety and something different,” she says. “They just want art to be real and the artist be someone that they can relate to.”

Kristy’s designs fit in perfectly with the current landscape of art. Her paintings are comprised of abstract pieces that are full of bright hues and interesting textures. In a digital world where people have become obsessed with posting and instragraming their favorite cocktails, shoes, home décor and paintings, Kristy’s fun and vibrant pieces have become the focal point of retweets and repins. Her online notoriety has helped her find success in Australia, Singapore and on popular websites such as Bucketfeet and One Kings Lane. “My color scheme helps me be appreciated in other places,” she says. For Kristy, it’s been a dream come true. “It’s just really exciting,” she says. “I think it’s every artist’s dream to be successful and to make money doing what you love.”

“I’ve always loved to create—it’s just something inside of me. I love to see people’s reactions and I love to see people happy,” This is probably the most humbling part of Kristy’s success story: she’s found success by simply being herself. While many artists might jump at the opportunity to live in bigger markets to build upon their name and brand, Kristy made the decision to stay close to home because it’s simply part of who she is. With the help of technology, she has found a way to market herself internationally while staying in the one place that truly feels like home. 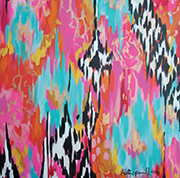 Living in Oklahoma has actually placed Kristy at an advantage in some markets. She was chosen by online shoe retailer Bucketfeet because of her interesting art designs and hometown pride. She was shocked to receive a call from the president of the company about featuring her designs on a shoe for the website. “They like to have people represent every area of the U.S. He called me to represent Oklahoma.” She now has a shoe featured on Bucketfeet.com called Mesa Sunset. The opportunity provided an interesting platform to get her artwork to the public. “I mean, I love shoes. It’s neat! It’s just another way to get my art out there,” she says. “It’s almost surreal, all the attention I’ve gotten.” The attention doesn’t stop with her own shoe design. Kristy is also looking forward to having one of her designs on a Hallmark card.

While Kristy enjoys the international acclaim that she is receiving, she says the support she receives from home means the most. The mother of four has a busy household with three teenagers and her nine-month-old son. Her children are excited about her success, but they still look at her as mom. “They’re excited for me,” she says. “They’re proud, but they don’t want me to think that I’m too cool. Their friends think I’m cool though!” When she’s busy creating and listening to music, the roles in her household strangely alter. “They just let me be. Most of the time they’re telling me to turn my music down!” Kristy says that her biggest fan is her husband Bryan. “He’s definitely supportive. He encourages me to be positive and motivates me.” Bryan is a corporate pilot. She uses the time that he is away to paint and keep herself busy. “If I’m feeling lonely or need a pick-me-up, I’ll create something pretty to look at. It makes me feel better.”

Kristy hopes that she will continue to inspire her fellow hometown artists. Kristy’s success shows that you don’t have to necessarily leave everything you know for the glitz, glam and struggle of the big city. With a little help from social media and a ton of self-encouragement, the possibilities are endless.

“Just be yourself and be proud of who you are!” 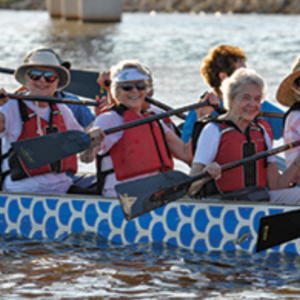 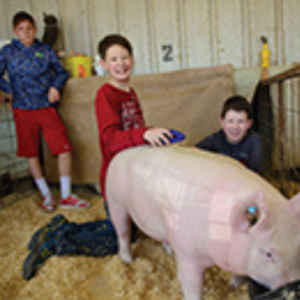