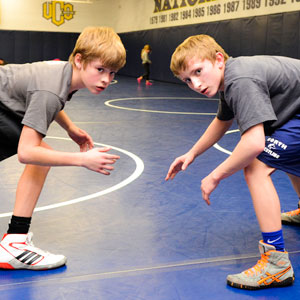 It’s thirty minutes before practice begins, and already that familiar scent tinges the air – that odor of sweat that seems to come off the cinderblock walls; the faint rubber smell floating up from the cushioned floor. It’s a wrestler’s paradise. No windows, no place to sit. Just a wall-to-wall mat with a dozen circles painted on it, each beaconing a pair of grapplers to step in and see who the better man is … today.

Austin already has broken a sweat. Alone, he crouches low in a praying-mantis stance, roaming back and forth across the room. Two steps with the right foot, then a hard low drive with the left, sweeping his imaginary opponent’s feet out from under him for a lightning quick takedown. Again and again, Austin repeats the move, chin down, brow furrowed in focus. It’s intense. Austin is 5 years old.

He smiles at his father, Sonny, who is standing nearby. “Do it again, buddy!” Austin is having a blast. And he’s not the only one. In half an hour, 75 boys, the “novice” group, ages 4 to 13, will fill the room. Then another group, the “open” class of experienced wrestlers, will take over the space. These are the Edmond Generals. Their motto? Leave it all on the mat.

Fourteen years ago, Hardell Moore — twice an Oklahoma High School State Champion, and a two-time Big 12 Champion and All-American at Oklahoma State University — started the Edmond Generals. 10 to 15 youths formed the inaugural team. Now, more than 150 wrestle with the club, which competes from late autumn until early spring. In early January, 70 Edmond Generals competed in the United States Junior Open & National Team Tournament in Oklahoma City. 27 placed in the top six of their weight class, with nine finalists.
“Wrestling has opened a lot of doors for me. This was a way for me to give back to the sport, and in a way, to my parents for all they gave me,” says Moore.

Moore, along with assistant coach Justin Rosen, teaches life lessons. These young athletes learn that effort is key, and giving full effort always pays off, though sometimes one must wait for the reward. The values of education, commitment and good citizenship are interwoven with pointers on the intricacies of the half nelson. “Wrestling is a very tough sport,” says Moore. “If you can wrestle, you can do anything.”

Coach Moore’s whistle blares, and his group begins running their warm-up laps. The next 15 minutes are filled with the kind of exertion and stretching that would make most grown-ups tired and sore just watching. A seven-year-old flashes by, sporting a wrestler’s unique headgear. He’s ready to learn. Soon, Coach Moore and Coach Rosen will begin teaching him and his teammates the same techniques they will see college and even Olympic athletes use in every match. Often, a seasoned teammate of age 11 or 12 will jump in to demonstrate a new move or technique. But not all are on the floor.

Around the edges of the room, several older, more experienced wrestlers have arrived before their scheduled practice time. Notebooks open, they’re doing their homework. And therein lies the off-the-mat focus the coaches have promoted. These spirited athletes receive great encouragement. Many of the Generals are the children of wrestlers. It’s a tight-knit community, and a larger-than-expected number of parents stay throughout the practice.

Connor and Paxton, both 13, are each in their ninth year of wrestling. Although they are in different weight classes — Connor weighs 78 pounds and Paxton, 86 — they often square off against each other on the practice mat. They are training for the upcoming Cliff Keen Tulsa Nationals, where more than 2,000 youth wrestlers from across the country will compete.

“I like wrestling because it’s a very aggressive sport,” says Connor. “But also, it teaches you discipline.” Meanwhile, Paxton likes the individual nature of the sport. “You are responsible for yourself. And, it keeps you in shape,” he adds.

Practice is nearing its close now. In one circle, two boys of about 6 are learning that once you take your man down, you must keep him down (an escape can earn a point for your opponent). One youngster realizes that sitting on his adversary seems to be working … for now. Not to worry — coaches will quickly step in to demonstrate the proper escape technique.

But it’s safe to say there will be no real escape for many in the room. Wrestling has captured them, and there is no doubt that future champions are among them.

by Krystal Harlow
Spring Break is right around the corner and Science Museum Oklahoma is gearing up with action packed kids camps, kicking off March 12th.
Read More  >
February 2012, Feature

by Radina Gigova
The road to recovery from addiction is never easy at any age. But one program focuses on young adults. Sobriety Now is for those ages 16 to 20 who are recovering from substance abuse. The program is offered through Edmond Family Counseling free of charge and is facilitated by Darcy Eitzmann,LPC, LADC. “It’s simply a...
Read More  >