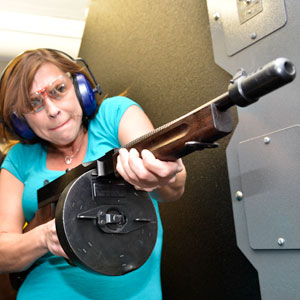 Standing in a dark cubicle with an actual 1928 A1 Thompson Submachine Gun — or as Hollywood calls it, a Tommy Gun — you feel like you need to be in a sharp pinstriped suit with a jaunty fedora sitting cockeyed upon your head and a fat cigar hanging off your lips like a curse.

It’s a nasty gun, loud with a burst of fire out the end, and it kicks up like an unbroken and angry mare. There was a reason why Al Capone and other famous gangsters favored this fully-automatic machine gun. It hit hard and sprayed wide. “In 1934, the government passed the law on machine guns because of this gun. Whenever you think of old gangster movies, this is the gun they used,” said Steve Hazelwood of Cold Hand Arms, a class 3 gun shop in Edmond.

That A1 Thompson is the granddaddy of the other fully-automatic machine guns being shot at Heartland Outdoors, 1444 N. Kelly, in Edmond, on the first Friday night of each month. The smell of burnt gunpowder, sweat and oil — not as unpleasant as it sounds — permeates the gun range as veterans, gun enthusiasts, beginners and even youth try out what very few civilians can try — shooting fully-automatic weapons.

Full Auto Fridays are a special event offered by the two-year-old gun range, and it’s one of the most popular nights of the month. From 6 to 10 p.m., $15 and the cost of ammunition grants you the chance to shoot anything from a bullish HK 53 to a surprisingly mild and friendly 9 mm Sterling fully- automatic (favored by the British until the 1970s) to the wild and ugly Krinkov, the gun used by Osama Bin Laden.

Because Hazelwood’s store has a special license to deal in fully-automatics as a class 3 dealer, he knows not everyone can have the chance to shoot a gun like an AK-47 — used famously by Russians, Vietnamese and Iraqis – or M-4s — the modified version of the famous M-16. So, with a passion for shooting, he offered the use of his guns to Heartland Outdoors for the public to try out. “This is the only chance a lot of people have to try out a weapon like this,” said Hazelwood. “Because of games like Call of Duty, machine guns have become a lot more popular and a real attraction. So, first and foremost, we teach safety, and we do it in a safe environment.”

Hazelwood grew up around guns, and he started working with guns as a hobby while taking care of his grandfather. Three years ago, he opened Cold Hand Arms, specializing in accessories for semi-automatic weapons. He has in his possession, however, some of the most impressive fully-automatics ever made. In March 2010, he approached Heartland about offering Full Auto Fridays. “We had a lot of people show up that first time. It was busy the whole four hours,” Hazelwood said. “The second month, we had 75 people. It was a line to the door.”

Jared Harshaw, business partner at Heartland Gun Range, said machine guns have a taboo allure about them. “Not everyone has them,” he said. “We usually start beginners off with a smaller caliber submachine gun, like a 9 mm Thompson or an M4 9 mm. Then we’ll jump you up to an HK 308.”

Black floors are littered with shell casings that gleam in a dull brass of all sizes. The first boom of a gun makes you jump three feet off the floor, even with earplugs. The range is filled with big guys and only a handful of girls, but the girls who are there are as enthusiastic about shooting as anyone else. Melissa Sullivan, an old schoolmate of Hazelwood’s, brought her 14-year-old daughter, Macaulin, to shoot. “This is the first time for us,” said Sullivan. “I’m not a gun enthusiast, but I know Steve and know about the company, so I thought I’d bring the kid out.”

Macaulin tries her hand at the M4 9 mm. As she shoots, bullets fly out of the gun like angry bees, stinging with heat and landing erratically. “Hello!” Macaulin yelled out at the first kick of the gun. She lets fly a long burst of bullets. “Ah! The casings are hitting my head,” she yelled again, but she doesn’t stop. She keeps going until the bullets are gone and only a huge smile remains.

The HK-53 is a bully of a gun. It’s short and thick with a flame that shoots out the front, but it’s nothing like the M-4 Shorty Commando. Lining up for the first shot, the noise alone could kill a man. It’s like a bomb exploding and all you see is flying shell casings and a starburst of yellow flame. Everyone else at the range jumps when the gun booms, and heat rolls off of it in a brusque wind. “Yeah,” Hazelwood said. “That’s one scary gun.”

The Kalashnikov AKS-74U (Krinkov) short assault rifle, another gun available at Heartland’s Full Auto Fridays, was used by police across the USSR and the post-USSR countries. The AKS-74U, or “Krinkov” as coined by Afghani Mujahidins during the Soviet invasion of Afghanistan in the 1980s, is also the gun of choice in Arab countries due to its compact size, which allows it to be carried in cars or concealed under clothes. It is, however, limited on effective range and has poor accuracy beyond about 150 meters.

In a beginner’s hands, bullets fly off the ceiling of the shooting range. “Those sparks were you hitting the ceiling,” Macaulin giggled. Everyone else on the range is as forgiving, and with big guns come big bonds. Everyone starts trading weapons, allowing a stranger to shoot a strange gun. Philip, of Edmond, owns the British 9 mm Sterling, an elegant and slender machine gun. Hazelwood lets visitors try the Heckler & Koch G36, which the Oklahoma City SWAT team uses.

The beginning shooter may be nervous at first. “Once you shoot an automatic for the first time, there’s a release of tension,” Hazelwood said. “Afterwards, you get pumped up. It’s like firecrackers — everyone likes the boom and how much noise they make. The allure is the fact that you can’t have it. It’s against the law. But, you have to know how to control an automatic or it’s no good.”

Harshaw expects the popularity of Full Auto Fridays to continue to grow. The enthusiasm brings more and more new faces to Heartland Outdoors on those Fridays, and everyone leaves excited. “You can expect big smiles. We aren’t making money on this, but it gives people an opportunity to do something adventurous. It’s exciting, and it’s a safe place to do it.” For more information, visit
www.heartlandoutdoorsok.com

by Krystal Harlow
Spring Break is right around the corner and Science Museum Oklahoma is gearing up with action packed kids camps, kicking off March 12th.
Read More  > 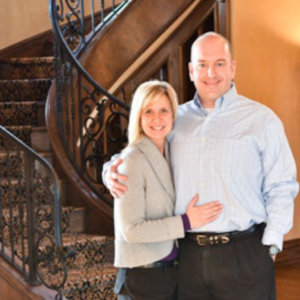 by Dena A. Edwards
If something sounds too good to be true, it usually is. But at least one Oklahoma City company has a program in place that they claim is truly as good as it seems. Showhomes OKC matches vacant homes for sale with screened home managers — individuals or families who live in the homes during the...
Read More  >