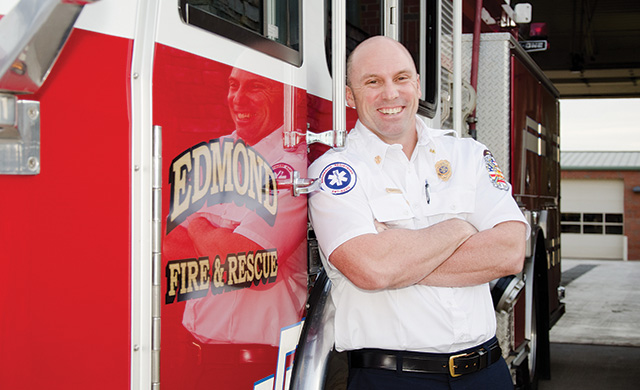 Jake Rhoades and his family
relaxed in the car as they drove back from a family reunion in Dallas when
suddenly, another vehicle crossed the centerline on Waterloo Road in Edmond and
slammed into Rhoades’ car. His wife and two sons survived, though she suffered
a broken neck and both sons had broken arms. As a firefighter and training
officer with the Stillwater Fire Department, Rhoades knew help was on the way.
The Edmond Fire Department responded and they worked to rescue the family, even
going so far as to make sure all were sent to the same hospital. It’s a day
Rhoades will never forget. He still sees the face of the battalion chief who
worked to help the injured family.

Now, Rhoades works with those
same firefighters who helped save his family. Even before he took the helm in
October as the new fire chief of the Edmond Fire Department, Rhoades had a
special appreciation for the Edmond firefighters. “Landing here is a blessing
in many ways,” Rhoades said. “Some of those men who responded to our wreck are
still here – they even remember the vehicle I was driving.”

On October 22, 2012, Rhoades
became Edmond’s newest fire chief, coming from four years as a deputy chief position
in Rogers, Arkansas. Before that, he worked for Stillwater’s fire department
for 16 years after graduating from Oklahoma Christian University in Edmond
where he played baseball. “I always liked working with kids and helping people,
and my buddies and I had talked a lot about the fire service,” Rhoades said. “I
thought it would be cool, and I knew eventually I would be a chief or a top
administrator.”

As a hands-on leader, Rhoades
spends most of his time meeting with personnel, discussing needs and changes,
helping out on fire calls and visiting departments throughout the city. It’s
common to see Rhoades out on the scene. “It’s hard for me to sit in an office
all day. I know I have to do the paperwork and do the administrative work that
gets these guys what they need, but I have to be out there in the field so I
can evaluate how we are doing too,” Rhoades said.

Training and improving
communications are the top goals for Edmond’s new chief. He’s working to
institute the best industry practices and cutting-edge training and practice
for the firefighters. “The guys are excited, but change is hard. Our business
has changed so much over the past 25 years. Because of the synthetics, fires
burn so much faster and hotter, and you have so much more long-term illness
through exposure to chemicals,” Rhoades said. “I have a unique ability to look
at the big picture while sweating out the small details. The devil is in the
details, and life and death happens for us in the fire service in the details.”

Training practices will be the
new rule of the day, from hazmat training to dive rescue to motor vehicle
accident response to human relations. Also many emergency calls are medically
related so there is a need for continuing education in that area. Edmond Fire
and Rescue are the first responders to all sorts of medical calls, from heart
attacks to trouble breathing to broken bones. Since fire stations are dispersed
throughout the community, firefighters are generally the first emergency
workers on the scene. They arrive to help during those initial crucial minutes
of extreme medical emergencies. And, of course, they’re always ready, willing
and able to respond to natural disasters or even man-made disasters like the
Murrah Building bombing in 1995.

“I’m big on communications, and
I use a model from (former New York City Mayor) Rudy Giuliani. We have command
staff meetings every week, company officer meetings every month and a citywide
meeting every quarter,” he said. “They have to trust that you have their best
interest at heart.”

Rhoades knows the challenges of
being a firefighter. While serving in Stillwater, he made numerous runs and
responded to many motor vehicle accidents. However, the most memorable run he
ever made was his last as a crew firefighter. A house was fully engulfed in
flames when a small boy ran up to him and told him his little brother was
trapped inside. “The front of the house was fully involved and had collapsed
already. Another trainee and I went inside. It wasn’t a good thing, and something
we would never have done if there wasn’t a person inside,” Rhoades said. “The
house collapsed, and we didn’t even have water.”

Rhoades rescued the child and
earned an award for valor, but the incident was bittersweet as the child later
died from smoke inhalation. But it is the one call that he remembers most.
“That’s what these guys do every day. It’s hard to put a number on it. They
make a difference in someone’s life every time they go out those doors,”
Rhoades said. “Even the smallest incident is important. On someone’s worst day,
we are who they call, and we have to deliver the best we can. Every incident is
about customer satisfaction. They’ll remember how you treated him, and that’s
important.”

“I’m used to being in other roles, so when I
put that Edmond patch on and saw that “Fire Chief” sign on my door,
it was a great day in my life,” Rhoades said.