From Fame to Faith 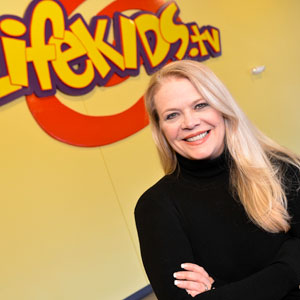 God comes to people in deep and mysterious ways, and sometimes He arrives in a stamped envelope from New Jersey.

Marcy Smith, formerly and professionally known as Marcy Walker, never knew faith or religion while growing up. She certainly didn’t find it on the daytime dramas she starred in while living in New York City or Los Angeles. She did, however, open a letter weekly from a woman in New Jersey who wasn’t a fan of the daytime soaps, but just a person compelled to write each week about God to a woman she never knew. “I wanted God in my life because of the gospel I heard through her,” said Smith, now a children’s pastor in Edmond. “I wouldn’t be here today, I wouldn’t have met my husband, I wouldn’t know Jesus as my Savior now if it wasn’t for her.”

Former star of daytime dramas “All My Children” and “Santa Barbara,” Smith is a vital part of the LifeChurch.tv Edmond Campus, but her road to Edmond and faith was a weaving one that took her through starlet dreams, fame and finally, despair.

Smith was born in Paducah, Kentucky but never stayed in one place long. The daughter of an aeronautical engineer, she went to many different schools before graduating high school in Illinois in 1979. “I say I’m from everywhere,” Smith says. “I was in Illinois thinking about college and was encouraged to go to a casting call for a PBS movie, ‘Life on the Mississippi.’ I went and they said that out of all the people who auditioned, I was the most perfect for the role of the sourthern belle because I was the most naive.”

Because of her potential, beauty and talent, the casting director encouraged Smith to move to New York City. With the blessing of her parents, she moved to the Big Apple, got an agent and landed her first role on “All My Children.” “I was happy beyond belief,” says Smith. “It was the answer to my hopes and dreams. I think whenever you are on a set, you are meeting a new family. You are a part of something, and you feel accepted in your part. But it was also a learning curve.”

Smith played the roles of Liza Colby on “All My Children” from 1981 to 1984 and again from 1995 to 2005, and of Eden Capwell on “Santa Barbara” from 1984 to 1991. She was nominated for a Daytime Emmy Award for Outstanding Lead Actress in a Drama Series in 1987 and 1988 for her role on “Santa Barbara” and won the Emmy in 1989 for her portrayal in which her character was brutally raped. “Being nominated for an Emmy was very exciting,” Smith says. “To be thought of as the best of the best was an honor and to win was fantastic. The recognition was not something I took for granted. It was pretty incredible.”

Besides soap operas, Smith starred in several movies, including “The Return of Desperado,” “Terror in the Shadows,” “Bar Girls” and “Midnight’s Child.” Yet, throughout her acting career and rise to stardom, something was missing. During that same time, a message was coming to her every week, but it was a message she wasn’t ready to hear yet.

While Smith played her roles on daytime television, a housewife in New Jersey named Carolyn Guest was witnessing about her faith in God to a neighbor. She desperately wanted to find something in common with her neighbor in order to reach her with her faith. “This … neighbor was going out of town for a while, and this was before everyone had DVR’s for their television,” Smith says. “The lady asked Carolyn to watch her shows for her so they could have coffee when she got back and Carolyn could tell her what happened.”

Happy to have a connection with her neighbor, that’s exactly what Guest did. The daytime show, ironically, was not the one Smith starred in. “I was in the show right before that one, but Carolyn would tune in early and catch the end of our show,” Smith says. “She said she felt compelled to pray and saw my face when she prayed. Her husband told her, ‘Actresses are people too, so what’s the harm in praying for her?’”

Soon, the letters came. The New Jersey housewife reached out to the daytime star and told her the story of the neighbor and that she was praying for Smith. The letters came every week — sometimes they shared news about Guest’s children and family, sometimes they talked about life, but they always talked about her faith.  “She wrote me every week for seven years,” says Smith. “I never wrote her back, but she didn’t seem like a fan, and she wasn’t a fan. I never think of her as a typical fan — just a person who came out of nowhere to fulfill a testimony to me.” At the time, she never saw how God was talking to her in each envelope.

Life, however, can turn sour and dark. In New York City, Smith saw suffering and sorrow in her friends and acquaintances. She saw drug use, alcoholism, anorexia, cancer and AIDS. She was surrounded by death and questioned why. “I lost a very good friend to liver failure,” Smith says. “I said, ‘I can’t do this anymore.’ Carolyn helped me understand that figure — God — in my life really wanted to be Lord in my life.”
Finally, the letters hit home. Having not grown up with faith, Smith’s first impression of it was through the actions of a stranger. “She modeled who Christ was before I knew Christ,” Smith says. “It was 15 years ago that I gave my life to Jesus, when I said ‘I don’t want to be the lord of my own life.’”

After accepting God into her heart, Smith said she all of a sudden wanted things that God wanted for her. She found a home church in Connecticut and met her future husband in Bible study. Two years later, she started teaching Bible school. “I loved teaching the children about how much God was there for them and how He loved them,” she says. “After a long time of praying, God told me that the scales had tipped, and I said I’m walking away from acting.”

Smith married her husband after six months of dating, and Guest, the letter lady, was among her bridesmaids. Soon, Smith’s family and Guest’s family both moved to Huntersville, North Carolina and Smith went to work as a children’s pastor. “The experience I had in North Carolina was amazing. It was amazing what we were able to do, but God called me to something more,” Smith says. “I put my resume out there and I got a call from LifeChurch.tv asking if I’d come to Edmond, Oklahoma. I thought, ‘Oklahoma? Really? This isn’t part of the plan.’”

What Smith found, however, was a home. As soon as she set foot in the church, she fell in love with the city, the people, the food and the welcoming atmosphere. “Six months ago we moved to Edmond,” Smith says. “For me, I wanted to go where God is, and God is here. God is at work in so many ways … and I love that I’m now part of this church family and staff.”

To this day, the letters that a stranger sent for seven years straight are still a dear part of Smith’s life. “I hope my story encourages people to not give up on people they have hope for. It does matter, and what you say to others matters. Because of Carolyn, I took the leap … and look at how many lives
she’s changed.”