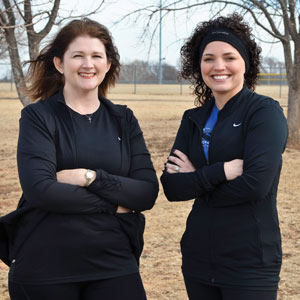 Melissa Huston has been running almost her entire life. She began when she was 15 and continued by taking a jogging class in college. As an adult, she ran regularly. Running was solitude for her; it was her time to think and work through issues, so normally she did it alone. Then, the Edmond mother of two turned 40 and decided it was time she entered her first race. With the goal of the Oklahoma City Memorial Marathon in mind, Huston began to look for an opportunity. The shorter Deer Creek Classic was a perfect starting point. Huston began to train, making it up to seven miles on her runs at Mitch Park.

The night before the race, she went with her family to pick up her registration packet. On March 5, 2011, Huston woke up, got dressed and put on her running shoes. That’s the last thing she remembers.
Allison Garrison grew up wanting desperately to run. But, Garrison had a heart problem that restricted her activity levels. She also had a stubborn streak that propelled her to do something she was told she couldn’t do. So, with adulthood, greater awareness of managing her condition and discussions with her doctor, Garrison began to run.

She started participating in races a couple of years ago and had a group of running buddies that included her young son. They made a routine out of entering the local races that led up to the Oklahoma City Memorial Marathon and that meant this past spring, they would be running in the Deer  Creek Classic.

“That day, we actually very much debated about not running in the race,” Garrison says. The weather was bitterly cold and she explains that if she hadn’t had her group to hold her accountable, she wouldn’t have run. If she hadn’t, the day may have turned out very differently.

During the race, Garrison kept pace with members of the military who were participating because, she explains, their group did cadence calls and it helped keep her motivated. This is how she happened to be near a young man who was having some trouble so she stopped to help him.

Helping comes natural for Garrison, who is a physician assistant. “Medicine has been a part of my life since I was born essentially,” Garrison says. Her parents divorced when she was young and her mother is a nurse who worked long hours and took her daughters along with her. “We basically grew up in a hospital and just hung out with the patients and got to know all of the different aspects of medicine.” Garrison is now the president of the Oklahoma Academy of Physician Assistants and works with students at the University of Oklahoma College of Medicine.

After she had helped the young man, Garrison continued on the run. She was making her best time ever and she was almost to the end of the race. There was just one last turn to make, one last hill. It was at the top of this hill that Garrison saw someone lying on the ground.

Huston was in great shape. There was no clear indication that an artery in her heart had grown between her aortas when it should have grown around them. She had two fainting spells when she was young, once at a high school dance and then again in her jogging class when she was 19. Though the latter incident landed her in the emergency room, the doctors didn’t investigate further.

“The doctors were like ‘we have no idea what’s wrong with her.’ They didn’t check my heart; they didn’t do any of that stuff. They just said ‘I guess it was just one of those things,’” Huston says and advises people to never ignore warning signs. Even though more than 20 years passed without incident, it actually wasn’t ‘just one of those things.’ Like a silent bomb waiting to go off, Huston’s condition is usually found in the autopsy after a person dies, she explained.

When Garrison arrived on the scene, there were a few people crowded around Huston. They thought she had had a seizure because, as Garrison explained, a cardiac arrest can sometimes mimic a seizure by causing a
person to shake.

Garrison asked if Huston was breathing. No one was sure. Huston’s condition was deteriorating and that’s when Garrison took charge. She felt Huston’s wrist and her neck. There was no pulse. She began CPR with the help of, as fate would have it, one of her former students. The incident is a prime example of why everyone should know CPR, says Garrison. “It was one of those situations where everyone who was around her, they wanted to help but no one knew what to do and everyone was kind of looking for someone to take over,” she says. “They were just waiting for help to arrive and meanwhile she was dying.”

Between breathing and chest compressions and with the arrival of the volunteer fire department and their equipment used to shock Huston’s heart, her pulse came back, intermittently. Garrison says she gives credit to God for helping her stay calm during the incident, because though she has dealt with all kinds of medical emergencies, never had she been faced with one outside of a controlled environment like a hospital or clinic. “I didn’t even realize what had gone on until it was over,” she says. “It just hit me all of a sudden what
had just happened.”

Huston and her family also see a higher power in what happened that day. “We all know that God was working in my life,” she says. “We all know that this happened at this particular time, on that particular day, with Allison running behind me, that was God’s perfect timing for this to happen.” Huston adds that it was a miracle she came out of the incident without brain damage. “They had told my husband that when I woke up, not to expect me to be the person that I was,” she says.

Huston is thankful to Garrison, who kept in touch with her and visited her in the hospital. “I always call her my angel because that’s what I feel like she is. She is the angel that was put behind me in this race,” she says.  Huston is now back to running up to four miles a day and emphasizes that what happened has made her even more determined to live a healthy lifestyle.