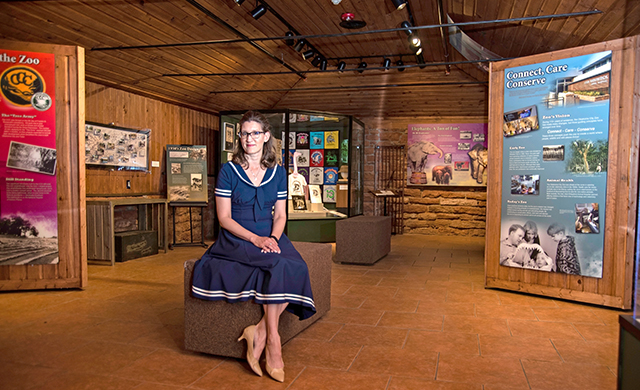 It’s rare to open a museum from scratch, and yet, in a few short years, Amy Stephens curated the opening of the only zoo history museum in America. The Patricia and Byron J. Gambulos ZooZeum at the Oklahoma City Zoo celebrates the zoo’s 115-year legacy.

When Stephens began as an educator in 1998, she was barely aware of the sandstone building that would eventually become what she calls her “life’s work.” The rockwork bathhouse was architecturally beautiful, but was used as a storage shed. “I vividly remember going inside the first time carrying a flashlight and wearing work gloves,” Stephens said. “It was storing Halloween props, so it was full of ghosts and cobweb-covered skeletons—but it was also full of brown recluse spiders. Real ones!”

Since Stephens managed the zoo library, she was asked to research the zoo’s little-known origins, which uncovered the zoo’s beginnings in 1902. Realizing that 100+ years of forgotten history had resurfaced, Stephens saw the need to save it. In 2005, she founded the zoo’s historical archive and eventually wrote two books about the zoo’s history.

Next, Stephens won an architectural grant to assess the bathhouse as a future museum. When it was uncovered that the structure itself was historic–built by the Civilian Conservation Corp in 1935—Stephens convinced the zoo director that the museum was a valuable community investment.

For five years, Stephens worked with maintenance staff to renovate the 80-year-old building. The Gambulos family, long-time zoo supporters, stepped forward with $500,000 for structural upgrades. In addition to finishing the building, Stephens was designing an exhibit plan, with the help of museum specialist, Sherri Vance, who assisted in archiving and museum displays.

“I wanted the right atmosphere, but it also had to be sturdy enough to survive thousands of visitors each year, including unsupervised school children who are in zoo-mode, not museum-mode,” Stephens said. “We selected opening exhibits that would resonate with visitors, like the monkey ship. The week the ZooZeum opened, in April 2011, our first baby elephant was born, so within a few days, we had Malee’s baby pictures and birth certificate on display.”

“The mission of the ZooZeum is for people to reconnect with their zoo memories. I constantly hear visitors say, ‘Oh, I remember that!’ and start these great inter-generational conversations. I’ve also enjoyed teaching zoo staff about the zoo’s architecture and geography. They’re often unaware of the rich history they walk past every day.”

The museum community has embraced the ZooZeum, as evidenced by the partnerships and awards it has received. “I’m proud that we’ve been trusted with artifacts on loan from many museums in Oklahoma. The archive now has about 6,000 artifacts and 20,000 images.”

A highlight for Stephens occurred in 2017 when the ZooZeum was placed on the National Register of Historic Places. “I never dreamed of restoring a historic building or opening a museum, but I couldn’t be more proud,” Stephens said.

“I love the zoo, and I’m so thankful to have had a role in its 115-year history. Over a million visitors each year fondly remember zoo outings—and that’s such a positive for our community. The ZooZeum is a unique cultural gem that preserves our zoo’s important place in history.”