The Silent Wounds of War 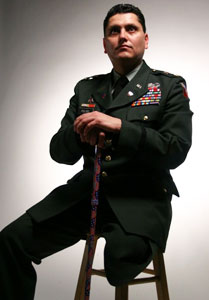 Millions of Americans walk freely down the street every day. They do so under the protection afforded to them by fighting soldiers, who have to walk the streets of foreign countries. Often, the sacrifices they make are great. With terrifying risks to their physical and mental health, these brave soldiers dedicate their lives to defending our freedom.

Edmond resident, retired Maj. Ed Pulido, is one of them.

At an early age, Pulido learned from his father what it meant to be a fighter for the United States. His father was granted U.S. citizenship through his service and was later wounded during Operation Just Cause. “He was my hero and my friend,” Pulido remembers. He saw enlisting as a way to honor both his father’s cause as well as his Hispanic heritage. Pulido eagerly joined the fight for freedom and began a 17-year-long career in the service.

But, the vision he saw for his future and what his future had in store were quite different. On August 17, 2004, Pulido was stationed in Iraq. He was traveling in an SUV used for high-ranking officers, known by the enemy as a “soft target.” Having just made his way out of Baghdad, the vehicle suddenly struck a roadside bomb.

The bomb shattered the vehicle’s glass and fragments of debris flew everywhere, some of it striking Pulido. He remained conscious, taking in the damage that had been done to his left leg. He managed to stop the car and was pulled out by another officer in the vehicle.

Following this incident, he was transferred to multiple medical centers before finally landing back in the United States. He would remain at Brook Army Medical Center in San Antonio for the next seven to eight months. It was here that his situation got worse. He underwent 17 surgeries and stayed in ICU for 40 days. During this time his weight dropped drastically from 195 to 118 pounds. In addition, a piece of shrapnel had been lodged in his left knee. Doctors informed him that it was causing an infection and on October 1, his leg was removed.

This was the darkest time for Pulido. Not only did he suffer the amputation of his leg, but he would be haunted by night terrors, reliving the horrors of the battlefield. As he describes as “the silent wounds of war,” Pulido experienced symptoms of PTSD, or Post-Traumatic Stress Disorder. The darkness set itself into his mind, leading to thoughts of depression and even suicide.

Pulido remembers his first step back into the light when he was visited by a triple amputee. Witnessing someone conquering wounds greater than his own and offering support was life-changing. He realized that he was being given a different calling and that his call of duty wasn’t over, it was only just beginning.

With the support of his wife, Karen, and daughters, Kaitlin and Kinsley, Pulido began to recover. He was awarded the Bronze Star for valor as well as the Purple Heart, among a number of other achievements he received during his endeavors.

He also received a new leg and with it, a new life. Pulido decided that he would now dedicate his efforts to disabled veterans and the families of fallen soldiers. He would offer them the support that he so desperately needed in his time of struggle. With this goal in mind, he co-founded the Warriors for Freedom campaign, which offers mental, physical and holistic healing services to disabled veterans.

Of course, the concerns of a wounded soldier are not only physical or mental. Having a household to support also becomes an issue. Pulido himself sat in his hospital bed post-surgery thinking, “How will I be able to support my family?”

In 2008, Pulido joined Folds of Honor, a foundation seeking to provide educational scholarships to the families of disabled and fallen soldiers. Receiving generous donations from sponsors all over the nation, including Budweiser, they have currently raised $12.9 million for deserving families.

The list of Pulido’s efforts is vast and ever-increasing, showing his true passion for the work he is doing. Last year, he met former President George W. Bush at the PGA Patriot Golf Day. He is currently awaiting the release of his book, a detailed explanation of the road to recovery which he describes as “challenge, triumph and change.” Pulido’s campaign also launched a radio show in February on KTOK called “American Warrior.”

Looking back at his experience and the work he has done, Pulido now admits that losing his leg in Iraq was “the best thing that could’ve happened.” He tells people that he did not lose his leg; he sacrificed it for the love of his country and his family. And it was this sacrifice that brought him to his true life mission: to honor and support the individuals wounded in their efforts to protect this country and “make sure no one is left behind on the battlefield.”

However, such a magnificent task requires the support of the entire country. The sacrifices made by these brave men and women should be honored not just on Veterans and Memorial Day, but every day. After all, it is so easy to forget what they’ve done for us and continue to do. When we walk these safe streets, let us remember the price others have paid for that safety. Let us remember those like Pulido who fight for our freedom.

For more information or to donate to Folds of Honor or Warriors for Freedom, go to www.foldsofhonor.org or