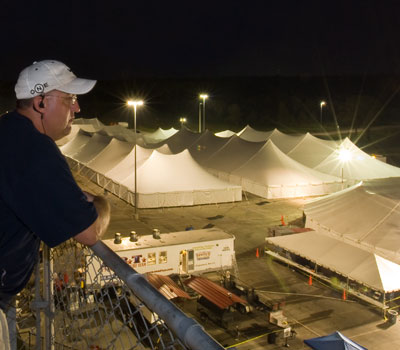 The old-fashioned corded phone his wife would never get rid of jolted Brent Swadley awake. It was 2 a.m. on an eerily quiet, frigid night. One of the worst ice storms in state history had caused massive power outages across central and northern Oklahoma, so nothing made a sound. If the couple had owned only wireless phones like everyone else, they’d still be snoozing, warmed only by the natural gas-powered stove and fireplace in their
Bethany home.

“Is this Brent Swadley?” the voice said.
“Uh, yes.”
“The same ‘Swadley’ that has the catering business?”
“That’s right. Who is this?”
“You probably don’t know me, but you once catered a barbecue in my backyard. I work for OG&E and I need 750 breakfasts at our Enid location in five hours. Can you help?”

“I said yes and began to ask the man a few more questions, but he had already hung up,” chuckles Brent, president of Swadley’s Barbeque Corporation, as well as Swadley’s Emergency Relief Team (S.E.R.T.). “We were there at 7:30 with hot food. And we provided meals for the next 11 days.”

Many metro-area Oklahomans are familiar with Swadley’s Catering, and more recently, Swadley’s Bar-B-Q restaurants. The family corporation has a decades-long history that began with Brent’s grandfather Rupert and his smoked meats, sold out of his general store in rural Texas. Over 80 years, the seed grew into a catering business capable of feeding 10,000 people, as well as four restaurant locations, including one on West Memorial Road.

But, the ice storms of 2002 and other catastrophic events created situations where Swadley’s expertise and equipment could fill a desperate need. More importantly, they sparked Brent’s interest to help, and employees followed his example.

“We were there at the aftermath of the May 3 tornado in 1999 with nothing more than a pickup truck, a smoker and food we purchased at Sam’s Club. We told Sam’s what we were doing, and they actually donated more food for us,” Brent adds. “These emergencies taught us what we needed to know on the fly, and eventually showed us the need to form an official organization to respond to natural disasters.”
S.E.R.T., which officially formed in 2003, has grown far beyond a truck and a smoker. During Hurricane Rita, S.E.R.T. served 21,000 meals in a single day – and it has the capacity to serve up to 9,000 more if the need arises. The fully customizable menu includes everything you might expect to find at a full service café. “We believe in great-tasting, non ‘institutional,’ food. Emergency workers putting in 15-plus hour shifts deserve good home cooking,” says Ron Swadley.

However, S.E.R.T.’s food service is only the tip of the iceberg. Everything S.E.R.T. provides has been developed through a simple process. First, they determine the need. Then, they figure out how to fill that need. Local governments or corporations such as utility providers usually enlist S.E.R.T. and fund their vital operations.
In the past 8 years, S.E.R.T. has constructed 58,000 square feet of lodging for volunteer workers at Hurricane Ike, set up a temporary kitchen for 45 days for an Oklahoma City hospital whose kitchen was destroyed in a flood, and has provided an extensive (and always growing) array of equipment, from light towers to portable toilets to on-site showers and full-service laundry for disaster workers and volunteers. “My father, Ron, and grandpa, Rupert, always taught us that we were in the people business, not the restaurant business,” says Brent.

Being based in Oklahoma City is a significant asset for the organization. Only a handful of similar organizations exist in the United States, and many are located “in the line of fire.” When a hurricane or similar disaster hits their area, they may receive damage, or have their own supplies cut off because of the devastation. S.E.R.T.’s suppliers are based in Oklahoma, and they truck in everything they need to set up operations in the disaster area. Their central location allows them to be on-site anywhere in the continental United States within hours of a catastrophe.

The Joplin tornado is the most recent example. Within five hours of the storm, S.E.R.T. was getting into place at Joplin’s city hall. During the next 7 days, S.E.R.T. helped manage the infrastructure for the heavily damaged city, operating 28 locations that provided emergency shelter, drinking water, electricity, bathrooms and lighting. After the first week, city leaders recommended S.E.R.T. to the administration at St. John’s Mercy Hospital, whose facilities were destroyed. S.E.R.T. constructed a M.A.S.H.-like hospital in the shadow of the condemned building, providing tents, a dining hall, a kitchen and equipment, a blood bank and a pharmacy. They located an empty dairy barn and supplied it to serve as a morgue. Large or small, they found a solution to each discouraging problem. S.E.R.T. continues to work in Joplin and will remain there through March.

A visit to www.swadleysemergencyreliefteam.com provides even more insight to the organization. The photo gallery shows examples of tent cities, big-rig supply trucks, and even Faith Hill and Tim McGraw’s former touring bus, now repainted, remodeled and serving as S.E.R.T.’s mobile command center. It’s that knack for acquiring and adapting equipment, and getting it into place that allows S.E.R.T. to do its work.
But, it’s the people at S.E.R.T., with their whatever-it-takes attitude, that tirelessly support disaster aid workers and transform the lives of victims by giving hope when all hope seems lost.

by Krystal Harlow
Tom Pace is a huge advocate for reading and wants to bring thousands of people together and give them free books!
Read More  >
December 2011, Business