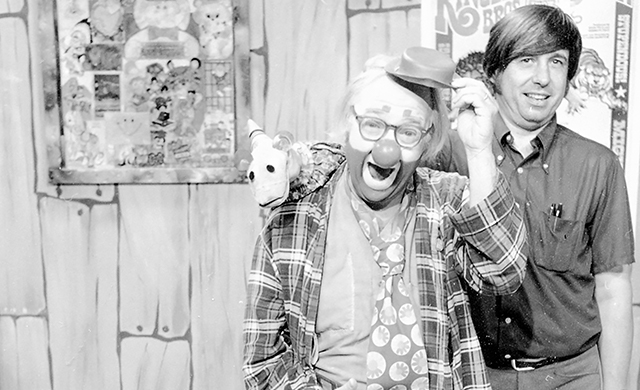 When Louise married Bill Howard in 1959, she had no idea her husband would be best known for his role as Pokey the Puppet.

Pokey was the sassy sidekick of HoHo the Clown, a famous Oklahoma performer from the 1960s to the 1980s. HoHo was played by Ed Birchall, a gentle, beloved man who entertained children on television and at birthday parties in the era before clowns had been portrayed as scary.

In contrast, Pokey had an ornery sense of humor that occasionally made HoHo blush. Bill’s dry wit was at its peak when he was tucked out of view of the cameras, sitting behind a draped desk with a sock puppet on his hand.

“Bill was so outgoing and funny, but his humor was more for adults,” Louise said. “He cracked HoHo up off camera–but if they were taping, Pokey enjoyed getting HoHo so flustered by saying something that wasn’t kid appropriate, like, ‘I need a cigarette.’ HoHo would stop the tape and say, ‘You can’t say that—this is a children’s show!’”

In truth, playing Pokey was just a portion of Bill’s 30-year career at KOCO Channel 5. Because he was lead cameraman, he witnessed a vast amount of Oklahoma history unfolding through his lens. Bill was often in the field to capture community events, tornadoes, local tragedies, and of course, the Oklahoma City bombing.

In his book, Confessions of Pokey the Puppet, Bill described his panic as he rushed to the scene to check on Louise, who was working at the downtown public library, just a few blocks from the explosion. Fortunately, Louise had left just 10 minutes prior. After that initial panic, Bill was able to focus and put in the long hours it took to cover the disaster.

More often, Bill’s work was lighthearted. He met a steady flow of celebrities who visited KOCO to promote their latest work, such as Ann Margaret, Natalie Wood and The Judds. He helped shoot some of the scenes for the movie, Rain Man. In-studio, Bill was stage manager for the camera crew. He directed many of the Jude ‘n’ Jody country music shows and over 3,000 episodes of the Ida B Show, a female-hosted television series that ran for three decades.

“Bill was intrigued by the camera and enamored with television,” Louise said. “The kids and I were very much a part of his career. We got to go to the studio, and we got invited to fun things, like the circus. HoHo would show up for our birthday parties. Our family had a lot of fun because of Bill’s career.”

Louise remembers how much the friends of her two children, Chris and Dawn, admired Bill. “Bill would stand in the house with that sock puppet on his hand and talk to them—and they’d look right at the puppet, like Bill wasn’t standing there talking. Of course, Chris and Dawn weren’t too impressed, because that was just regular stuff for us.”

Over the years, Pokey’s sock would wear out, so a replacement was sewn. One is currently on display at the Oklahoma History Center, and Louise has one at home.

Although Bill has been gone for five years, he’s still in the memory banks of many Oklahomans. He finished writing Confessions of Pokey the Puppet at the end of his life, just before cancer overtook him. Louise and her children say that reading the fun stories in Bill’s book is like listening to him talk.

“My son has read the book about five times, but he said it’s always sad at the end because there won’t be any more stories,” Louise said. “We had a great life and I miss him a lot.”

Pokey the Puppet is currently on display at the Oklahoma History Center.