Our Artist in Residence 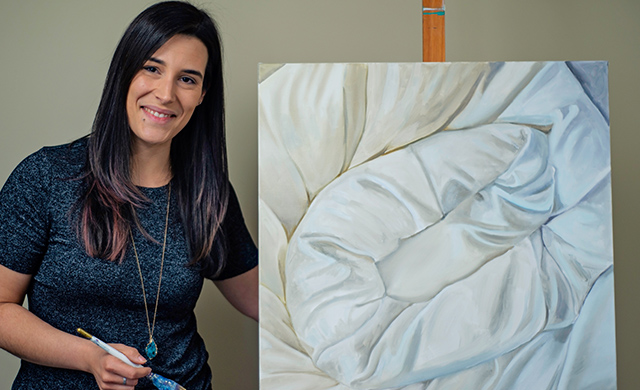 As the City of Oklahoma City’s first artist-in-residence, Erica Bonavida is bringing art directly to the community through outreach programs and by working out of a studio in City Hall. For most of her childhood, however, the Edmond resident was adamantly against art as a career. This stemmed partly from a need for perfection and a feeling that she didn’t have a talent for it. Then everything changed after she took a painting class in high school.

“I got to play around with oil paints and really get a feel for the brush and what I could do with it,” Bonavida said. This ignited a passion for art that led Bonavida to the University of Central Oklahoma, where she graduated with degrees in painting and French. After college, she launched a professional career as an artist, exhibiting her work at venues like Science Museum Oklahoma.

In February, the City of Oklahoma City named her its first Artist in Residence and through the end of the year, she will work out of her studio at City Hall for at least 12 hours a week. She’ll also organize three public outreach events, and hopes to do one of those in conjunction with a downtown-area elementary school.