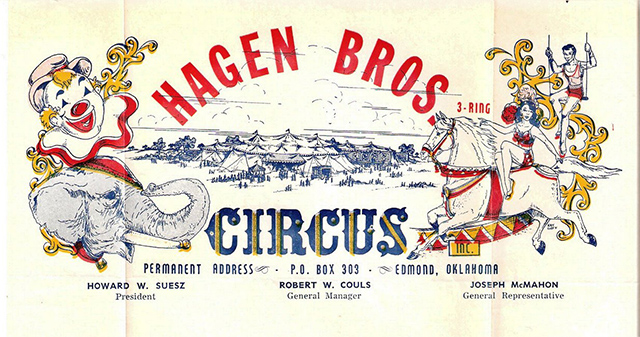 Between 1943 and 1976, it wasn’t uncommon to see giraffes and llamas grazing in the fields along Kelly. Edmond was the off-season sheltering grounds for two traveling circuses. Both were managed by Edmond college graduate, Howard Suesz. He first started the Clyde Brothers Circus, featuring indoor acts, and he later added the Hagen Brothers Circus as an outdoor tent act.

Something about being a circus town seems oddly out of sync with the perceptions of early Edmond—the pioneer town focused upon religion and college-level education. Perhaps Edmond’s obscure role as a circus town is fascinating because circuses have fallen out of favor. Or maybe it’s the knowledge that hidden remnants of the circus yard still exist along a heavily-trafficked street in Edmond.

But truly, why wouldn’t Edmond–a place that hosted a circuit of famous opera singers in the 1920s and was home to an Olympic gymnast in the 1980s–also be an entertainment hub? If you’ve read Sam Anderson’s bestselling book, Boom Town, you know that Oklahoma City and its surrounding communities have defied logic since day one; that day being April 22, 1889. So, of course, Edmond was a circus town.

When researcher, Derek Lee, first started working at Edmond Historical Society, he was surprised by how frequently he received inquiries about the Edmond circus. “Many people have memories of seeing the animals as they drove by or hearing lions roar in the distance,” Lee said. “I think there is a certain nostalgia about a circus that is intriguing. Until I started looking into it, I’d never thought about what happens to a circus when it isn’t on the road.”

Because winter was not the ideal time to travel or to attract crowds to a tent, circuses used the down-season to repair road-worn vehicles, work on new acts, and rest. Oklahoma was an ideal resting ground because of its central location in the United States and its mild winters. Another key factor for Edmond was the railroad running through town and a highway nearby, which undoubtedly provided easier access to materials, performers and animals from around the world.

I direct your attention to the disappearing act in Ring 3…

In 1976, the aging Suesz sold his Edmond-based circuses. The land, which still has remnants of old caging, a bus and a house, was abandoned over time. An unfortunate string of trespassers has crossed the fence to sneak around the circus graveyard, pluck souvenirs and leave graffiti. However, the land recently went up for sale. It’s unlikely that giraffes and a big tent are going to be part of Edmond’s landscape again. Is it possible that the purchaser might feel nostalgic about preserving Edmond’s unique circus history or artifacts in some way? If not, Edmond’s circus is about to become an obscure memory indeed, left only to those who remember hearing lions roar in Edmond.

So, step right up folks! Celebrate the memory of Edmond’s greatest show on earth! 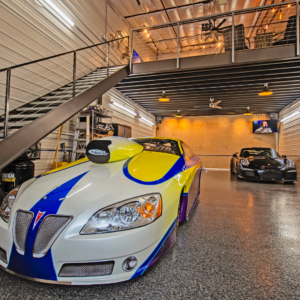 Your Garage: Not Just For Cars Anymore 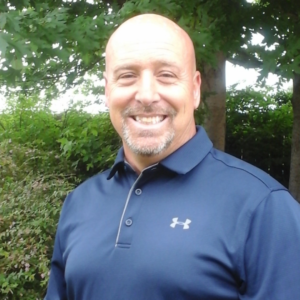