On Par: 70 Years of Edmond Golf 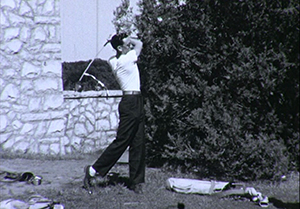 The Edmond Golf Club, a humble nine-hole course built in the city’s youth, opened in a time when Edmond was still a railroad town with a decidedly blue-collar streak. Now, nearly 100 years after the construction of Edmond’s first golf club, the city will host one of the most prestigious events in professional golf.

The sport’s history in Edmond has changed as much as the city itself. Participation in a major event like the 2014 USGA Senior US Open is the latest in a series of positive developments for golf in Edmond. While the modern-day success of the sport is evident, less known is the fascinating history of golf in Edmond. It wasn’t always pristine fairways and undulant greens for as far as the eye could see.

In anticipation of Edmond’s biggest golf event of the year, the Edmond Historical Society and Museum is showcasing a new exhibit—appropriately labeled “Fore”—which runs until September 27th. The exhibit will detail the history of the sport and provide plenty of unique insight into Edmond’s emergence as a golfer’s paradise.

The Edmond Golf Club opened in April of 1923, explained Derek Lee, Exhibit Coordinator for the museum. A modest nine-hole course was installed on land between 9th and 15th streets between Boulevard and Broadway, in what is now a residential neighborhood. A second course was built “west of town” at Edmond Road and Santa Fe Avenue in 1934. The putting greens used on these courses were composed of sand that would be soaked in oil and compacted, Lee explained. The rough surface meant that players were required to smooth their putting line before each stroke. Both courses had closed by the 1940s and Edmond went without a golf course until 1971. 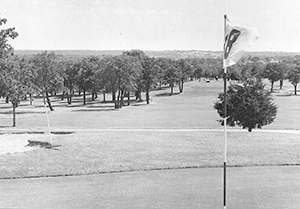 The opening of Kickingbird Golf Course was a turning point in the city’s golfing story. Built by the City of Edmond in 1971, it was the first municipal course in town and remains very active today. Before Kickingbird opened, residents traveled to Guthrie or Oklahoma City to play golf. Lee explained that having a successful municipal course allowed the game to grow in Edmond by giving people from all walks of life access to an 18-hole course and driving range in their own town. To this day, the course’s packed parking lot is a testament to how popular the game has become in Edmond. Generations of children have grown up hitting balls on the driving range and chasing errant shots all over the well-kept course. Kickingbird now boasts a successful junior program and has three golf associations for men, women and senior citizens.

Few other cities in the state offer as many choices of public or private courses. The area is ideal for golf course design—rolling hills dotted with trees, lakes and ponds make for some of the most scenic golf in the Sooner State. Playing in the notoriously constant Oklahoma wind guarantees a challenge on every shot and the unpredictable weather ensures that no two rounds of golf are ever the same. 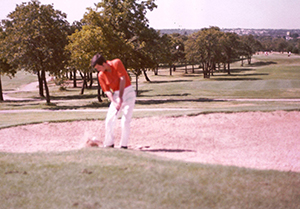 Oak Tree National will host the 2014 USGA Senior US Open this month. The tournament, which is sure to be a success for the golf community and city’s economy, will not be Oak Tree’s first time to host a major golf event. The club has previously hosted the 1984 U.S. Amateur, the 1988 PGA Championship, the 2000 PGA Club Pro Championship, and the 2006 Senior PGA Championship. Several renovations and upgrades have been done since the 2006 tournament in an effort to attract even more events in the future.

The founders of the Edmond Golf Club would no doubt be amazed at what golf in the city would become. In that respect, Edmond’s golf narrative reveals many things about its history. The number and quality of Edmond’s golf courses improved alongside the city’s economic fortunes. The sport’s growing popularity is a microcosm of the rapid expansion the city has seen since the days of sanded greens and compact nine-hole courses.

The “Fore” exhibit is open through September 27th at the Edmond Historical Society & Museum. Visit edmondhistory.org for more information. The USGA US Senior Open at Oak Tree National Golf Club is July 7th-July 13th. Tickets are available at www.2014ussenioropen.com. 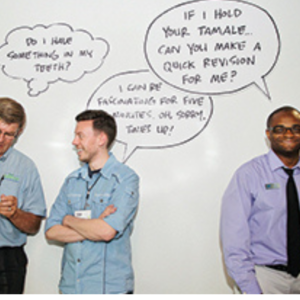 DAVE: The Art of the Party 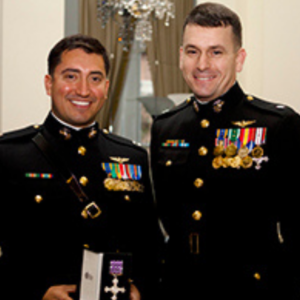