My Streetcar Tour of America 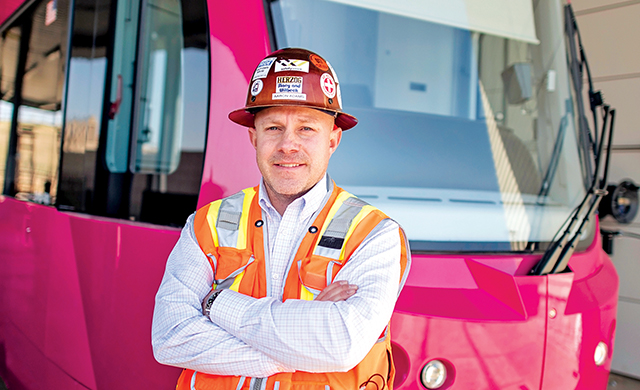 For every child who grew up loving Thomas the Train—there’s a man with an even bigger job than that of Sir Topham Hatt! His name is Aaron Adams, and he is a project manager who oversees the construction of streetcar systems in major cities. Adams is currently stationed in Oklahoma City managing the MAPS 3 downtown streetcar construction, which is slated to wrap up in about a year.

Adams is ultimately responsible for every aspect of the project. He facilitates all the staff and contractors, and communicates with city leaders about the streetcar system’s progress. Every project Adams has worked on has its own personality and challenges, but in his experience, Oklahoma City had a well-planned streetcar layout from the beginning.

“It’s the best engineered alignment I’ve ever seen, which means that the route is spread across the square mileage in a way that touches so many beneficial places in the downtown area. Because the city has been cleaned up, and there are not a lot of decrepit buildings, the vacant areas are prime spots for restaurants or apartment complexes,” Adams said.

In Adams’ opinion, it won’t take long for riders to appreciate moving easily through town without walking long distances or struggling to find nearby parking. “Once we get past the orange cones and the construction dust—this streetcar is going to be a very good addition to the city. It will get cars off the road and reduce pollution. Businesses are going to thrive.”

Building commuter systems for a living equates to a very transient lifestyle. For nearly 20 years, Adams and his family have traveled from state to state, zigzagging from the Midwest to the West Coast. They usually reside in a city for about two years at a time. Adams calls it his Tour of the United States of America.

“It’s like a military lifestyle, except they move five times more than I do,” Adams said. “And we’re living in the coolest of places–thriving metropolises and up-and-coming areas.”

Adams credits his wife, Randi Sue, for her ability to mobilize quickly as they transition from city to city. Their two children, Brandt (9) and Lucy (6) also adjust quickly. Adams said that neither one is shy and has no issue knocking on doors to make friends in their new neighborhoods. “I’m sure that will get harder as they get older, but we remind them that we aren’t losing the friends we made, because we’ll stay in touch. We’re just making more friends at the next place. I think my kids are well-rounded because they’ve experienced so many parts of the country.”

So where is Adams moving after he finishes in Oklahoma City next year? “I’m headed somewhere,” Adams said. “I won’t find out until right before it’s time. It only took us six weeks after our Kansas City project to be living in Edmond.”

The Adams family has an ongoing tradition as they move on to the next city. “On our last day in a town, as we’re about to hit the road, we take a family picture by our street sign. In each one, you can see the kids getting bigger and dad getting balder,” Adams laughed. “But I like those pictures, and I want to do that forever.”

It’s not a lifestyle for everyone, but Adams is passionate about working with trains and he loves showing off his work with others. “It’s totally awesome to show off the big, cool things we build! Maybe I didn’t place each piece of concrete, but I was integral in getting it into place. I really love it that my kids will ride a streetcar someday, even if it’s five extensions down the road, and know that we were responsible for the inaugural streetcar.”