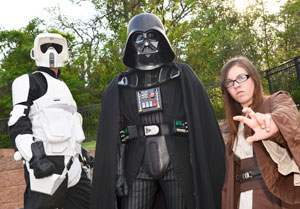 You’re members of the club JediOKC. How did it first get its start?

interests, so in 2002, four guys met up at Crossroads Mall and started the group.

How often do you meet and where?

JediOKC meets twice a month, the second Thursday and the last Saturday, plus appearances and fundraisers. We have our meetings at different restaurants in the metro. We eat, socialize and plan future events.

What types of fundraisers do you do?

We have helped local schools like St. Mary’s School with their Harvest Carnival, MDA with their Muscle Walk & Telethon, but our favorite is the Integris Mental Health Center for Children in Spencer, OK. We take candy

every Halloween (in costume of course), some surprises for Christmas, and put on a giant ice cream buffet in July. All candy, toys and ice cream are donated by the club members, their families, fellow church members and co-workers.

How does one become a member of JediOKC?

Check out our website at www.JediOKC.com and participate in our online forums where we do most of our planning. Then come to one of our meetings. No dues, no fees, just food and friends!

Do you have any funny stories of appearances gone awry?

The most memorable occasions are when I’m dressed as Darth Vader and children pledge their allegiance to the Dark Side; some even go as far as kneeling!

Do you always dress as Darth or do you have other costumes as well?

We have three Darth Vaders in the club now, so it helps to have more than one costume. I also have stormtrooper armor, Biker Scout armor and a custom-made Wat Tambor.

How do you guys walk in the Edmond 4th of July parade in full costume without dying of heat stroke?

The Edmond Liberty Fest Parade is a highlight of our year. We usually have a float entry, and we try to provide rides for our costumed club members on that float so that they don’t succumb to the heat. One year we had a club member pass out from dehydration somewhere on 2nd street. He rides on the float these days. I survive by cheating – one year I wore my full Vader costume but rode a segway on the parade route.

Any upcoming events or appearances?

On May 5th we will be at Vintage Stock in Edmond from 10 a.m. to 12 p.m. (east of Broadway on 33rd next to Homeland) for Free Comic Book Day. We will be collecting donations to rehabilitate the Leadership Training

Ropes Course at the Integris Mental Health Center for Children in Spencer. For more info on the facility, call 951-5005 and tell them Darth Vader sent you.