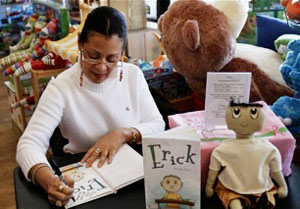 It was more than 22 years ago when Edmond resident Rita Gray-Martin encountered a young boy who was very angry. As a teacher, she wanted to convey to the boy that it was OK not to understand sometimes and that he was loved. To illustrate this particular lesson she decided to write a book. Now, years later, that book is being published to teach the same lesson to other children.

One could say that Gray-Martin has led a wildly varied life, but learning and education have always been common themes wherever she found herself. Growing up in Detroit as the daughter of a Motown musician, she loved acting, music and dance. A scholarship to train as a dancer led Gray-Martin to New York as a teen, and a desire to get an education in performing arts propelled her into college.

But a career as a dancer didn’t last and the desire to learn what life was like in Europe sent her into the military and studies overseas. But this didn’t turn out to be a permanent fit in her life, Gray-Martin says. She returned to the U.S., working at a bank and taking business classes. Still, something was missing.

It was then, in her mid-20s, that Gray-Martin realized that it wasn’t the different learning experiences she was meant to have, it was teaching. “I actually think that I was born to be a teacher,” Gray-Martin says and explains that as a child she would teach her stuffed animals and imaginary students. “Teaching was innate. It clicked, and I loved it; it was easy for me.”

Since then, Gray-Martin has worked in many capacities as a teacher. She spent 21 years in the classroom teaching first through fifth grades and has served in administrative positions the past 10 years. In her 32-year-long career in education and now working as a motivational speaker, she has been teaching her model of goal setting and positive expectancy through workshops and various speaking engagements. This model began as an effort to change the education system, she says.

“I saw that there was a disconnect,” Gray-Martin says of some teaching environments. “I think that with the stresses of education and society and trying to teach the curriculum, some people have gotten caught up (in) just getting through the curriculum and they’re losing perspective of (how) teaching and education can still be fun.”

At first, she worked with just teachers. Gray-Martin has been a certified trainer, instructing teachers since 1988, the same year she moved to Oklahoma. Then, she felt urged to convey the message to a wider audience. An opportunity opened up by chance and now she speaks weekly to the community in her on-air faith-based radio show, “Steppin’ Out on Faith” on AM 1220.

“With technology, everything is so fast-paced, everything is there at your fingertips; people are losing the ability to set goals, believe, have faith in something,” she says.

Most recently, with publishing her book, Gray-Martin is attempting to teach one of her most valued lessons of all, the one for the little boy years ago. She is doing this through a fictional character named Erick, also the book title.

Gray-Martin explains that it never felt right to publish “Erick” until recently. She was seeing more and more children dealing with the same anger issues as the little boy who inspired the book, and she felt called to publish. “Our premise behind this is we want all children to have a voice. Usually when a child is angry it’s because they don’t understand something, or something is hurting them and they don’t know how to express it,” she says.

Gray-Martin tried several avenues to get her book published, from companies in New York to self-publishing, but nothing felt right until she had a fateful meeting with an author who pointed her in the direction of Tate Publishing, based locally in Mustang. They proved to be the perfect option for Gray-Martin. She explains that they immediately welcomed her.

The morning of her first meeting, as she hurried to make it on time, she couldn’t find a parking space. Seeing only one reserved spot open, she decided to park there anyway and that’s when she knew it was right. “When I pulled up and got out of the car, it was reserved for me. It said ‘Reserved for future author Rita Gray-Martin,’” she says with obvious joy. She worked with the publishing company and illustrators to bring the project to life. “Erick” officially launched in January of this year.

Gray-Martin now has hardback and paperback books available and there are even custom Erick dolls for people to order online. A short film is also in the works. She says the feedback she has received has been positive. The book is meant to help adults understand and take the time to investigate further into a child’s outbursts. She says children see themselves in Erick.

“Adults are amazed because even the kids that they perceive as being the good kids, the child with no problems, they relate to the stories. When I read it, I’ll say, ‘How many of you have felt like that? How many can identify with him?’ and they always raise their hand,” she says of her reading sessions.

She makes various public reading appearances to get the book out to as many people as possible in an attempt to further her mission. “We have to pour into our society, so our society can continue to grow,” she says. And in this way, Gray-Martin is teaching by example.

For more information, go to ritagraymartinauthor.webs.com. 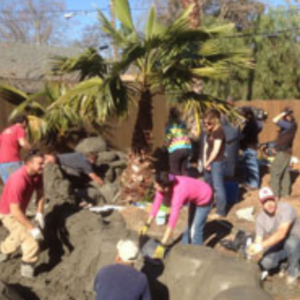 by Krystal Harlow
Donnie Price, owner of Stone Makers of Central Oklahoma, has seen his share of beautiful outdoor spaces. In fact, he’s made a few of them. Price’s company uses a method in which a form of concrete is manipulated to replicate real stone. He’s created breathtaking pools, waterfalls, retention walls and fire pits, just to name...
Read More  >