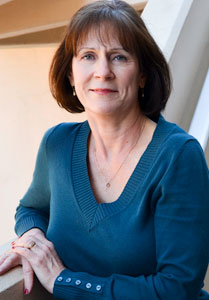 “The tears keep gushing out like torrential rain — I’m not as tough as you think I am.” These words were written by Reginald Lewis in a poem titled, “The Lyrical Life of a Dream.” It was written from his prison cell on death row.

Since 1973, there have been 138 people in the United States that have served on death row, only to be released after being proven innocent. These survivors spend an average of 9.8 years incarcerated. After they are exonerated, some of them receive no compensation for their years wasted. They are given no apology for the damage done to their name. They are simply released, left to pick up the pieces of their lives as they attempt to forget the fear that haunted them daily in that tiny cell.

Edmond resident Nancy Vollertsen would gladly tell you her story if you were to ask. She works in the financial aid office at the University of Central Oklahoma, but her real passion lies in the work she does with Witness to Innocence, an organization aimed at abolishing the death penalty while providing support to death row survivors and their families. Nancy has a particularly close connection to this cause. She spent eight years fighting for her brother’s life.

It was 1985 and Nancy’s brother, Greg Wilhoit, was living with his wife Kathy and two young daughters, Kimberly and Kristen, 4 and 14 months old. On June 1, Kathy was found murdered in their Tulsa apartment. While Greg and his daughters mourned their incredible loss, it was one year later things got unimaginably worse. Greg was charged with the murder of his wife.

“They had no evidence,” recalls Nancy. “We knew that.” What they did have, however, was a single bite mark found on Kathy’s body. A group of dental experts claimed that the bite belonged to Greg. Nancy says she and her family remained hopeful, having full faith that Greg could never have committed the crime. Their parents jumped into action, hiring an attorney to represent him. But as Nancy explains, the attorney had undisclosed alcohol abuse problems and, needless to say, the trial did not go in Greg’s favor and he was convicted of murder.

Nancy and her husband had been living in Germany when she received a call from her father. The fact that it was her father calling left her uneasy, since courtesy calls were normally her mother’s business. “He said, ‘Bad news. Greg was convicted,’” Nancy recalls. As she struggled to get her mind around the statement, he finished, “That’s not all. He was sentenced to death.” The family went into a state of shock.

Nancy returned home to her family’s aid immediately. They refused to accept the loss. With the help of Greg’s new attorney, Mark Barrett, who had been appointed for his appeal, the team sought after the nation’s top forensic odontologists.

“They took one look at the bite mark and said, ‘There’s no way that’s Greg.’” Finally, with affidavits supporting these new findings at his appeal in 1993, the judge declared Greg innocent. He was cleared of all charges.
While some may assume that day was the happy ending they had hoped for, Greg’s new found innocence wasn’t all positive. After having spent the past eight years fighting this case, Greg literally lost everything — his house, his mental well-being, and the opportunity to father his two little girls. “Greg was a wreck,” says Nancy. “He never recovered.”

Oklahoma is one of 34 states still exercising capital punishment. It is stories like Greg’s that fuel Witness to Innocence to work tirelessly until they achieve their goal of ending the death penalty across the country.
Witness to Innocence uses the exonerated to spread their message. By allowing death row survivors to tell their stories publicly, they hope people will see that not only are real human beings going through this, but the ripple effect widens as their families and friends are affected as well.

Most of us can only imagine waiting in a cell for years after being told they were to be executed. In Greg’s case, he was told a needle would end his life. If that didn’t work, the electric chair. If power ceased, he would be hung. If the rope failed, he would be shot. Add this to the fact that he was convicted of the murder of his wife, a crime which, after Greg was released, was never solved.

Of course, not everyone on death row is innocent. People are guilty of committing heinous acts every day. Timothy McVeigh sat on death row before being executed for his crimes in the Oklahoma City bombing.
This is a truth that Nancy will gladly acknowledge, pointing out that her and her family were victims of a crime as well and they lost a loved one. Still, she stands by her resolution. “Revenge is not the answer,” she says. “Perpetuating the circle of violence is not the answer.”

She says that while many may be guilty of a crime, it does not give us the right to exact the punishment that they deserve. Nancy has been told by families of the victims of the OKC bombing that the execution of McVeigh did little to quell their pain. Of course, she admits, criminals of such tragedies should in no way be allowed to walk the streets. Life without parole, she offers, would be a fair medium of the two sides, allowing justice for the victims, but not resorting to the same crimes for which they are accused.

Nancy then references a quote often used by Witness to Innocence spokespeople, “You can free an innocent man from prison, but you can’t free him from the grave.”

Greg now lives in California, working with Witness to Innocence to tell his story. A victim of Post-Traumatic Stress Disorder, he currently battles alcohol and drug abuse problems. But at least he can say he is alive. The real question remains, how many of the wrongly accused were not so lucky?

For more information about Witness to Innocence, or to read the stories of other death row survivors, go to www.witnesstoinnocence.org.