In the Works: Administrative Services Building 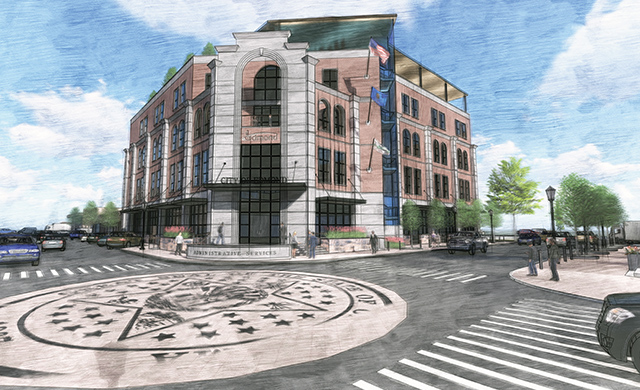 In the Works: Administrative Services Building

The new 70,000 sf City of Edmond Safety Center on the SE corner of First Street and Littler Ave. forever changed the built environment in Downtown Edmond. The entire police operation and detention center were moved to the building in 2016. This move left the former police station located at 23 E. First Street on the NW corner of 1st and Littler Ave. empty. The move also prompted the City of Edmond to hire Small Architects to complete a study to evaluate potential uses of the empty building and an assessment of City of Edmond administrative office needs.

Thomas Small delivered the facility needs assessment report to the city council that contained six options. The recommended option calls for the demolition of the former police station to make way for the new City of Edmond Administrative Services Building. This new building would be architecturally similar to the safety center across the street, be 83,000 sf, five stories tall, and consolidate all the downtown City offices to one building.

The first floor of the new building would house the public utility service currently located in the Hardgrove building in Downtown Edmond. There would also be first floor retail facing the street to serve the building.The second floor would house the planning staff, building services, and engineering that are currently in the “red roof” building at 10 S. Littler. The community image, nance, and human resources departments would occupy the third floor with administration and risk management services on the fourth floor. The fifth floor would be offset from the rest of the building to reduce the impact of the height of the building on other structures downtown and contain the city chambers, multipurpose rooms, executive session conference rooms, a catering kitchen, storage area for event furnishings, and a roof-top garden and balconies.

The Downtown Community Center will be demolished for potential parking. The tenants including the Oklahoma County and Driver Testing Center will be moved to the “red roof” building at 10 S. Littler. The City First building housing the Mayor and council member offices will also be demolished to provide for a “pocket park” allowing for a terrific view of the new building from 2nd Street. Approximate cost for the new building would be $24 million or $283 per square foot. While this was only a workshop for the architect to present the proposal, it appears the City is serious about consolidating services into a new building. This proposal would not only accomplish that, but make another huge improvement to the built environment of downtown Edmond.