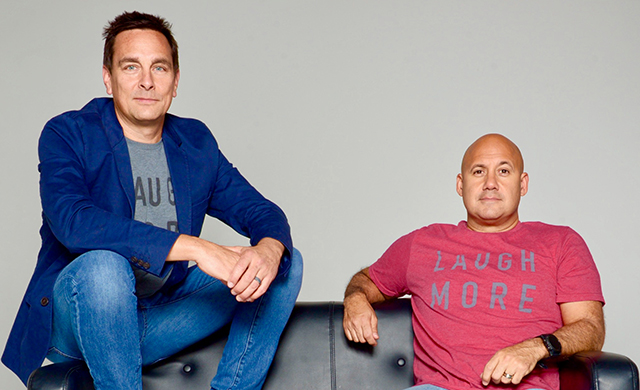 Meet two guys who were class clowns at Edmond Memorial High School. That was in the 1980s, and they’re still at it 30 years later–except now it’s their job to make people laugh! Tommy Woodard and Eddie James are The Skit Guys. They perform live comedy sketches on stage and create a variety of funny videos and mini-movies. Their trademark is clean, family-friendly humor which is especially embraced by churches looking for short videos with a positive message.

Video themes vary widely, such as “Granny’s Dating Advice,” “Mom Goggles” for Mother’s Day, or a hilarious series called “Awkward Invites.” “We’re like a 2018 version of the Smothers Brothers, except cleaned up,” Woodard said.

“In the beginning, we stole material from Saturday Night Live and made it Christian,” James said. “That’s very hard to do!” Woodard added.

Their career journey began on Sept 17, 1987, when Woodard invited James to come to his youth group. “And I went because I heard there was pizza,” James said. “It changed my life, and we started doing regular Wednesday night skits for our youth group. Now we’re two fat, middle-aged guys, but we’re still making people laugh.”

Woodard and James perform about 50 shows a year, all over the country. Their stage show isn’t fancy–two guys on a stage with minimal props–but they have a large following of fans. They remember one week when they performed in someone’s garage, and the very next week, they performed for 24,000 people at a Dallas arena.

“That was incredible,” James said. “You don’t forget the sound of 24,000 people laughing together.”

The Skit Guys are moved by the feedback they regularly receive. Woodard and James are blown away by comments from people who began watching them because of their comedy, but then found hope in their message–like the man who watches The Skit Guys online in the privacy of his home because it’s illegal to profess Christianity in his country. Or the bitter school teacher who graded papers on Sunday morning at the school where a church service was held. He started rushing to the auditorium every time he heard the uproarious laughter. He enjoyed watching the comedy skits, but eventually committed to Christ.

“A sketch usually starts when James says, ‘Hey, I have an idea.’ He shares it with me, and I look at him like a cow looking at a new gate–and then I start to get it,” Woodard said. “Then it’s, “I say this, and you say that, and I’ll say this…’ We improv it with audiences, and it usually takes about a year to get it where we want it.”

A few of the skits Woodard and James perform are serious in nature. The most poignant one, God’s Chisel, has gone viral. “People resonate with it. When we do it live, people start to cry,” James said. “It’s like that moment when Billy Joel plays “Piano Man” on stage, and the crowd goes nuts and gets emotional.”

“One guy told us that he was divorced, but after watching God’s Chisel with his ex-wife, they got remarried,” James said.

Between stage appearances, The Skit Guys are working on their latest mini-movie. “There’s an insurgence of faith-based movies in the market, but most of them are dramas–so we are writing a comedy,” James said. “It’s not cheesy Christian funny, it’s real, gut-busting funny, to make you laugh, cry, think and hope.”

“We constantly get new ideas from people who share their real-life stories with us,” Woodard said. “We’ve had so much fun for 30 years now. What people are seeing in our skits is Eddie and me living out our friendship on stage.”

For more information and videos go to skitguys.com.