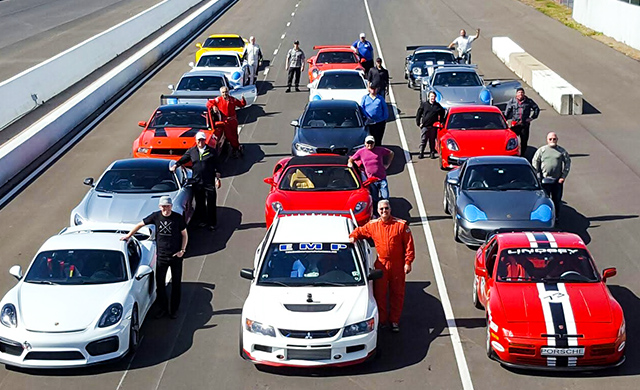 What do you do if you love fast cars, but have no place to drive them?

If you’re Andy Brant, you found Enhanced Motorsports Performance (EMP), a private track group for car aficionados based in Oklahoma.

Different from NASCAR and drag racing, track events are a fast-growing trend for car hobbyists, Brant said. Interested in cars since he first started driving his 1978 Porsche 911 SC, Brant has since raced with a Porsche club, held a membership with the National Auto Sport Association and placed 3rd in a 2014 regional racing competition.

After 25 years of driving and racing, Brant said he decided to see if there was any interest among his colleagues and friends. In 2012, Brant, who works in the medical profession, started hosting a quarterly “doctor’s race day” that repeatedly sold out. “With any hobby, you find friends that have similar interests,” Brant said. “Oklahoma’s car scene is just amazing.”

Having received such a positive reception, Brant decided to make the event more wide-ranging. “I had to find a name that encompassed anyone who was interested,” Brant said. In 2013, EMP got a new name and form, offering an “eclectic, high-end car experience” for owners of sports cars.

Now, Brant said he is EMP’s “ringleader,” a “one-man show” who organizes and hosts premier track events at regional locations within driving distance. EMP rotates between Hallett Motor Racing Circuit in Oklahoma, as well as tracks in Texas and Kansas. EMP’s largest gathering, the organization’s version of the “Super Bowl,” takes place at the only Formula One track in the country — the 4-mile Circuit of the Americas in Austin, Texas.

Getting out on the Track

Over the course of any given private track day, Brant said attendees split the rental fee, as well as costs for flaggers, safety crews and track insurance. Friends and family are welcome to watch — or ride along — and Brant and other coaches offer help to novices.

At EMP events, it’s about driving for fun, Brant said. Drivers are welcome to go fast or slow. Track days focus more on instruction and driving; they are not competition-based or considered a race for places. As a result, the experience allows for camaraderie amongst car lovers. “You drive at your comfort level,” Brant said.

Attendees at EMP’s private track days can show off their honed skills by participating in a contest where the quickest one lap around the track merits its driver an inscription on a shared trophy — EMP’s version of the Stanley Cup, Brant said. “That brings a level of passion to our sport. Everyone wants to learn left-foot braking, threshold braking… It gives everyone a chance to improve,” Brant said.

EMP has also allowed for other, adjacent hobbies, Brant said. The events feature a social dinner, and many of the attendees also utilize GoPro cameras to create videos they post online. The group’s relatively small scale —150 members, about 30 of which are active attendees of a given private track day — means “maximum track time,” according to Brant. Unlike larger groups with necessarily rigid schedules, EMP provides a “turnkey” autonomous experience, Brant said.

EMP’s small scale allows for community and for relaxed events, but this can also mean higher costs for members. The organization’s biggest obstacle is having enough attendees to pay for track rentals, Brant said. Consequently, Brant hopes to increase the active member base, work on branding merchandise and possibly even organize a West Coast racing trip. “It’s been really exciting,” Brant said. “I have dreams of making this a big opportunity.”

For Brant, EMP has been both a hobby and a second job. “It’s rewarding to build something from scratch and look back over the last four years,” he said.