The House that Anna Built 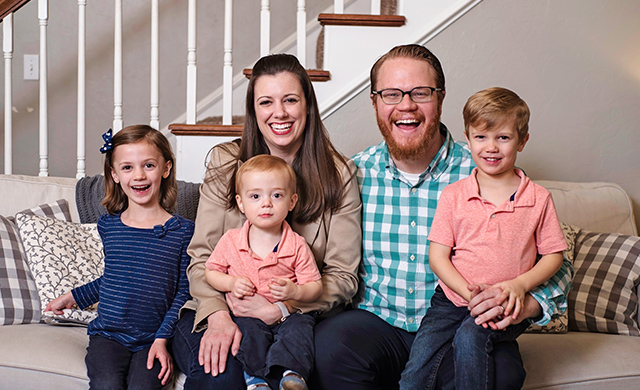 The House that Anna Built

It’s a picturesque home, nestled in a quiet Edmond neighborhood with a vibrant family waiting on the inside. The Boggs’ make you instantly feel like part of the family as you enter their warm home. The family dog—that gently caresses visitors with her beautiful fur—is one of the first family members to greet you. The Boggs family just finished dinner and their latest addition—twenty-one-month-old Liam—managed to throw the majority of his food around the kitchen table. His parents, Sarah and Matt Boggs, simply shake their heads and marvel at the joys of raising a smart and active child.

During the summer of 2015, The Boggs were living a comfortable life when they were profoundly affected by a series of messages at their family church. “It really stems from one verse in the bible, James 1:27,” Sarah said. “We have two older kids, but at the time, we had a four-year-old and two-year-old and we started praying about having a third baby. We then ended up hearing four sermons about that verse and orphan care. At that point, I took Matt aside and said ‘I think we need to consider adoption.’”

After committing to praying for six months about fostering, the Boggs became familiar with the foster care system in Oklahoma. “We read seven to eight books on foster care, adoption… any book I could get my hands on,” Sarah said. Matt and Sarah were initially surprised about the growing need for foster families in Oklahoma. “At the time, there were over 10,000 children living in Oklahoma’s foster care system,” Matt said. The Boggs went into fostering with the hopes of helping a child successfully reconnect with their biological family. “We truly believe God didn’t design families to be broken,” Sarah said. “But, we can’t fix that brokenness.” Through their friends at Quail Springs Baptist Church, the Boggs built a family of supporters. A number of their friends who also decided to become foster parents told the Boggs about Anna’s House Foundation.

Anna’s House Foundation is a faith-based organization dedicated to providing a network of support for families caring for children in foster care. “The namesake of our organization was a baby who was born in Oklahoma County jail,” Executive Director Katherine Craig said. “She was premature and announced clinically dead and on the way to the hospital, she miraculously regained her heartbeat.” The Harkins family eventually adopted Anna and today she is living a happy and thriving life. The staff at Anna’s House Foundation prays that a similar happy ending will happen for the hundreds of children who the organization works to support.

In February 2016, Sarah and Matt met a representative from Anna’s House at an adoption seminar at their church. In March of that year, they started paperwork and were certified to become foster parents in May. “It was really astounding,” Sarah said. “We have friends that are going through the adoption process through other organizations and they are six months into the paperwork. It’s hard because you’re waiting and still thinking about the kids who need help.”

Anna’s House Foundation has a goal of 60 days to open a home for placement. Shortly after reaching that goal the calls began. “We received eight different calls for placement,” Sarah said. After a number of false starts, the Boggs family finally received the call that would change their lives forever.

The family met Liam on June 30, 2017. Liam was born two months early at three pounds. As soon as the family completed their neonatal intensive care unit training, Liam left the hospital and moved into his forever home. Today, Liam is a happy, healthy one-year-old who enjoys playing baby brother to six-year-old Chloe and four-year-old Isaac. “Our home was blessed by Liam,” Sarah said. “Yes, he throws lettuce and cheese at the dinner table, but what one-year-old doesn’t?”

For more information go to www.annashousefoundation.org