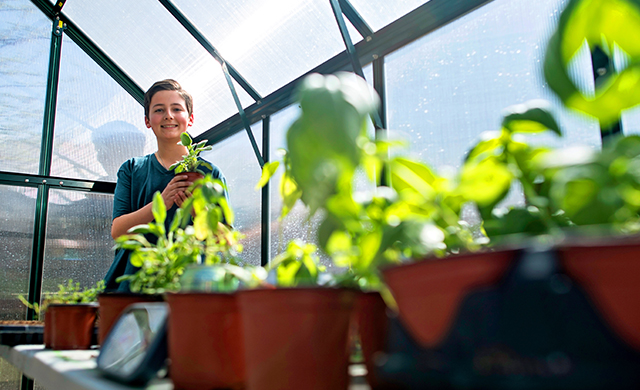 Next time you’re at the Edmond Farmer’s Market, stop by to visit Everett Daugherty’s booth. You might be surprised to see that Everett’s Herbs is run by a young teenager. Everett is fanatical about plants! He has his own greenhouse, and he even makes his own pickles. “It’s very satisfying to know that when my mom makes dinner, she’s using vegetables that I grew in my garden,” Everett said.

“By the time I was in 5th grade, I was fascinated by ‘all things plants,’ so when I had an opportunity to join the Watching Outdoor Wonders (WOW) club at Washington Elementary, it was the most perfect thing for me,” Everett said. The club helps maintain the school’s butterfly garden. Everett enjoyed it so much that he’s continued to volunteer at the school.

For his 9th birthday, Everett’s uncle built him a 4 x 12 ft. garden bed, the first of three gardens that he now maintains at his house: vegetables, cucumbers and zinnias. Each year he experiments with new plants. He likes growing radishes, tomatoes and herbs, because they taste so good in salads, but it’s his cucumbers that are “wildly successful.”

Everett is currently a freshman at Santa Fe High School, where he’s an active member of Future Farmers of America (FFA). Inspired by his agricultural classes, he is growing corn varieties in his vegetable garden this year. “I’m Cherokee, so I’ve ordered heirloom seeds from the Cherokee Nation Seed Bank,” Everett said. “They are beautiful and I like to keep the Cherokee legacy alive.”

Last summer, Everett visited the Edmond Farmer’s Market and was inspired by a plant grower who shared the story of his own son selling herbs when he was young. “Then I knew what I wanted to do. I went home and started researching and came up with the name Everett’s Herbs.” In December, Everett planted an herb garden in the FFA greenhouse.

“My mom helped me make business cards, and my dad taught me about finances,” Everett said. “They’ve inspired me to work hard and have a dream.”

Now, he has ten varieties of potted herbs ready to sell at the farmer’s market this spring. “If more people would plant native herbs, like dill, fennel or parsley, it would be beneficial for butterflies,” Everett said. “Butterflies are extremely important to nature in general since they pollinate so many plants that produce food.”

Everett’s FFA teacher, Trevor Lucas, encouraged Everett to apply for a Nursery Operation grant from Caterpillar, Inc., the machine company. Everett was selected as one of 153 people in the U.S. to receive $1000 toward his plant business. He decided that buying a greenhouse would make it easier to care for his plants in his own yard.

“My parents were willing to spend the extra $200 I needed to get a really nice greenhouse. I finished installing it a few weeks ago. I’m so happy because it’s so much easier to take care of the plants. I can water the plants and adjust the temperature when I get home from school.”

As a new business owner, Everett is hopeful that he will sell his herbs and inspire others to care about plants and agriculture. “I’ve gained so much experience in the six years I’ve been planting gardens. I’m becoming more independent and thinking about my future in botany. My teachers and parents have really inspired me to work hard and work toward a dream—and hopefully I’ll get there.”