Five years ago, Dave Miller invited me to write for his new magazine, Edmond Outlook. I agreed and trotted off to my first assignment—Andy Boatman’s glassblowing studio with no AC in the scorching August heat. Not a comfortable afternoon, but what an adventure. I was hooked. Over the years I counted it a privilege to share many community stories with our readers. A few years ago, I began writing a monthly column—Letters from Louise. Dozens of you have written or called to encourage me and tell me you laughed, cried and reminisced right along with me. What a compliment! I plan to continue sharing my life with you through Letters from Louise and hope to write new stories about the people of Edmond. After all, everyone has a story to tell. Today, we are updating five popular stories—staff favorites—from past issues of Edmond Outlook. So sit back, relax and enjoy!
To read the original articles, visit www.edmondoutlook.com/5

I chose to update this story as a tribute to my stepdaughter and the changes she has made in her life, and to let people know that prayer works. My wife, Sandy, and I were blessed with the opportunity to raise Aubrey since birth. The story ran in May 2007 when our granddaughter, Aubrey, was three years old. Now, after six years of “raising baby Aubrey,” we get to experience a different kind of joy. We packed up the car and moved Aubrey in with her mom, who has made huge strides in becoming a full-time parent.

She went back to school to earn her RN degree. She has a great job and has made remarkable changes in her life. We are proud of her and believe she is ready for the full responsibility of raising her daughter. It’s a difficult transition for all of us, but it’s the right one. Do we miss Aubrey? Only when she’s not with of us. It’s odd to be happy and sad at the same time. Sandy and I lean on each other. I went through the emotions of Aubrey leaving before the move, and Sandy a week afterward. But we are on our way to being grandparents to Aubrey instead parents. Aubrey and her mom are finally becoming the family God always meant them to be. We couldn’t be more happy for them.

The Road Back From Columbine — May 2008
Stacy Brasher, Director of Operations

I chose this story as my favorite because my generation lived through the OKC Bombing, the Columbine tragedy and 9/11, so we’ve grown up asking ourselves: How do you want to be remembered? What’s the legacy you want to leave behind? As Crystal paints a picture of her seven minutes of terror in that school library, you understand the value of life and the meaning behind these questions. The original story ran in May 2008 and highlighted the seven terrifying minutes that Crystal hid under a library table while young gunmen systematically killed 13 people at her high school in Columbine. During those horrific moments Crystal asked God to save her life and allow her to help others.

Since that time, Crystal has traveled around the world as a spokesperson for Samaritan’s Purse, ministering to young victims of war, poverty and cataclysmic disasters. She has also written a documentary film about school violence in other countries as well as the U.S., including the tragic incident at Virginia Tech. However, funding is not yet in place for release of the documentary. “I still speak at schools across the country concerning school violence,” said Crystal, “but I also like to speak in churches and other places. I love to share a message of hope and healing.” Crystal is enjoying her time at home in Edmond with her husband of seven years, Pete Miller. She works as a Crossfit coach at CrossfitOKC in Edmond and has turned her hobby of photography into a skilled craft. We wish her well.

I love this inspirational story about a youth pastor who sees the negative influence the entertainment industry has on teens and how he uses standup comedy to combat that. He’s not only making a difference in the smoke-filled comedy clubs on Saturday nights, but he’s breaking all the stereotypes of what a pastor should look like on Sunday morning. The original story ran in June 2008 and gave people a different view of church services. Elijah Tindall does not look or act like a typical church pastor.  In fact, he gave up his position as youth pastor to minister to youth groups across the nation.

And yes, he actually does do standup comedy in places like Las Vegas and Hollywood, but always keeps it clean. He is popular with all crowds but his greatest love is working with young people. He recently performed at a youth conference in Canada to a sold out crowd of 15,000 people. Tindall wants to transform the teenage culture by impressing on youth that their value comes from within their soul, not from what they own or wear.  “It’s also important that I keep myself grounded and accountable,” said Tindall, who often attends a church near Phoenix. “It’s just an hour’s flight from home,” adds Tindall who lives in Ventura, California, with his wife and three children, ranging in age from four to a teenager. They travel to The Springs Church about three times a month to work with teens and young adults while keeping a secure foundation for their own faith.

In the years that I attended Oklahoma Christian, I never met a professor that tried so hard to help his students and make them feel as special as Dr. Tony Alley. His exuberance toward learning is something I try to carry on in my own life. My only regret is that I didn’t express my gratefulness to him when I was a student. But then, Dr. Alley was never looking for compliments. He would much rather help others. His story ran in November 2007, after he had to give up teaching due to the devastating effects from an incurable brain tumor. His heart-wrenching goodbye to his family and his great faith in God, documented in a videotape, were testaments of his love and courage.

Since Dr. Alley’s death, there has been a tremendous outpouring of compassion for this beloved teacher. Dr. Alley had donated 30 of his own books to the Oklahoma Christian Library for students interested in the field of computer graphics and new media—his specialty. Today, 206 books make up the Tony Alley Collection in the university library; all but the original 30 purchased through donations by students and colleagues in his honor. “A scholarship fund was important to Tony,” said his wife, Priscilla. “The first Dr. Tony Alley Media Scholarship will be awarded next spring, and a simple memorial garden is being planned in his honor.” The garden will be located in an area just outside the window that was once his office and will simply be called, “The Alley.”

The story of the Blue Star Mothers is a touching reminder for me of the freedoms we richly enjoy and the debt of gratitude we owe our troops and their families. The mothers, whose sons and daughters are in combat zones, inspire us all to comfort those in need and know we are rewarded many times over in the process. The story ran in 2005 as Edmond Outlook’s first cover story. The dozens of care packages surrounding the mothers and volunteers made a beautiful picture. Packing boxes with snacks, books, personal care items, and many other things provides a positive way of coping. Anything to lighten a soldier’s day. The group often sends more than 200 care packages a month, packed to the brim so those receiving them have plenty to share.

Jan Martin was president of the Edmond/North OKC Chapter when the story ran September 2005. One month later, her son, David was killed in action. Those Blue Star moms, who also had children in harm’s way, came to her aid and comforted the grief-stricken mother. Jan continued with the group for a couple of years to honor her son’s courage and heroism, but eventually relinquished her office and went back to school and earned her degree as a tribute to her son. Sherry Strensrud is the current president of Blue Star Mothers and carries the baton proudly. 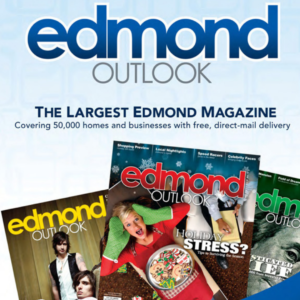