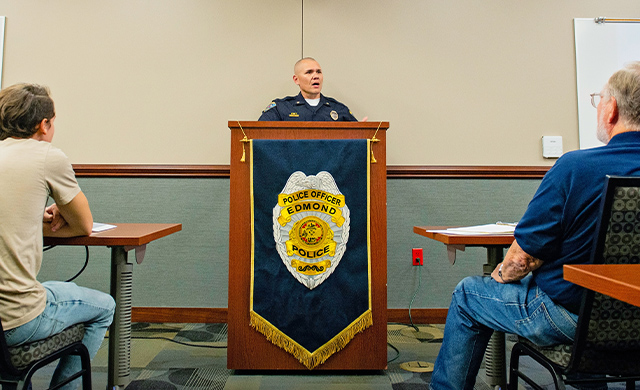 I never imagined taking a family night out to the Edmond Police Station, but on a warm Tuesday night, there we went, my wife and I along with our 25-year old son, who was fascinated by the idea of attending the Citizen’s Police Academy.

Chief JD Younger greeted us at the door, then, to a fully-packed conference room, he gave us an overview of the Academy along with his vision, values, and focus for the department as a whole. Twice a year, Edmond PD hosts this 11-week course with the goal of improved problem-solving by building strong community partnerships.

My son was the one who talked us into signing up. For the past five years he’s been learning all he can about law enforcement, even attending many of the monthly “Coffee with a Cop” get togethers in Edmond. When my wife learned about the academy, we decided to sign up as a family.

And so, over the next three months, we spent 2-3 hours every Tuesday night at the police station and I too became fascinated learning about the scope of what this 160-person team does.

With a $21M budget, responsibilities to provide a safe environment to live and work for 100K citizens in 90 square miles, Chief Younger outlined how his team responds within four minutes anywhere in the city for an emergency call (six minutes for non-emergency).

Like many others, up until now my main interest with the police department had been limited to not getting pulled over for exceeding the speed limit. But as we watched dash camera videos of routine traffic stops or calls for assistance escalate into dangerous situations, it became clear how easy it had become for me to take for granted the risks these officers face each day.

In addition to the criminal and crime scene investigations that accompany most police departments, detectives described to us how Edmond provides liaisons to larger Drug Enforcement Agency and Joint Terrorism Task Forces, each of which brings valuable training and intelligence sharing back to the community in return for the manpower investment.

The highlight of the course is an entire Saturday spent at the Edmond Police Training and Firing Range off of Danforth and Midwest Blvd. Here new recruits go through a 21-week program of physical conditioning and procedural training. For us, it was a morning spent learning and watching how K-9 officers build bonds with their animals and train them to perform searches, Special Weapons and Tactics demonstrations, as well as the Milo Range Simulator, a hi-tech virtual reality training area where patrolmen simulate shooting and use of force scenarios in a computerized environment.

Upon graduation, all three of us received our certificates and became eligible to join the Edmond Citizen Police Academy Alumni Association, an organization that meets monthly and hosts fundraisers such as the 10 Oct Golf Tournament at Oak Tree. Alumni members are also eligible to volunteer assisting at the security booth at the station, helping direct queries to the right office.

The last thing left for our family was to schedule ride-alongs. As part of the program each Academy member is encouraged to sign up for a morning, evening, or back-shift ride-along with a patrol unit to watch and learn more about the daily life of a patrolman as they respond to calls for service. My son remarked that he’d be sure to have the patrolman help me watch my speed on 33rd Street! 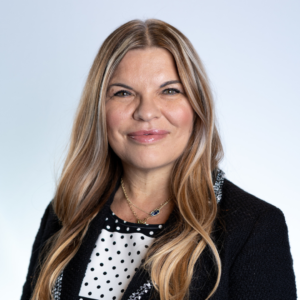 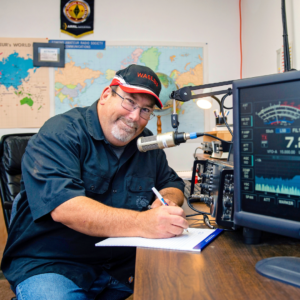