BRINGING HOPE TO THE HOPELESS 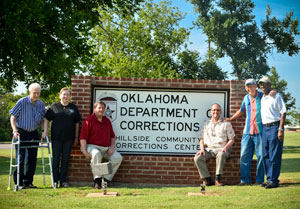 When he is not working his day job in the weed control business, Edmond resident John Green is following another calling – bringing hope to those who have none. During the past 10 years, Green has been an active member and volunteer of Kairos Oklahoma, a prison ministry whose mission is to bring a message of love and forgiveness to incarcerated individuals and help them become productive members of society.

“I do it because it helps me deal with life. It helps me focus on something besides myself,” said Green. “I might go in there thinking I’m doing good, but I receive much, much more than I give.”

Kairos Oklahoma organizes 10 four-day weekends a year where 35 volunteers spend time inside state prisons. These four days are filled with singing, dancing, hugging, sharing good food and stories together with 42 inmates who have applied and been selected to experience the special visit.

“They might initially come for the food and the cookies. (We take 5,000 dozen homemade cookies made by volunteers, with us to each of these weekends.) But they leave with trust and compassion, realizing that they are no different than us and that we love them,” said Green.

Cookies are always a favorite of the inmates, but they are also instrumental in communicating the message of forgiveness. “Forgiveness is a big issue on this weekend – forgiveness of self, forgiveness of others,” explained Green. “On one of the nights the guys are given a dozen special cookies and those are to be given to the man on the yard that they hold the most hostility against.”

The written reflections from inmates reveal that the Kairos weekends have been truly exceptional:

“What I’ve gotten out of Kairos is respect, love and courage to move forward with myself. I’ve come a long way from where I first started. I was blind to almost everything, but now I see what is in front of me.” – W.W.

“The four-day weekend was an amazing experience. I’ve never felt so much love in one place. We live in a place where love is often forgotten, much less felt. I’ve seen a lot of guys show signs of having emotions and a heart after years of showing totally the opposite: many have forgotten they have a heart and that they are loved.” – D.E.

Kairos Oklahoma is part of Kairos Prison Ministry International, which operates in more than 30 states in the U.S. as well as other countries, including the United Kingdom, Australia, South Africa, Peru and Canada. Kairos Oklahoma includes volunteers from many denominations such as Methodist, Baptist, Catholic, Episcopal, Church of Christ, Pentecostal and Presbyterian, just to name a few.

These organizations, churches and volunteers commit to pray for these 42 inmates specifically by name during the very weekend the inmates are experiencing this expression of love and compassion. To visually communicate to the inmates just how many people are praying for them on the outside, Kairos volunteers pull out a hand-made paper chain with a name on each link, representing a person who’s praying for them. “The chain goes on forever,” says Green. “It’s about 100 yards long and encircles our part of the gymnasium two times. You can see [the inmates] melt in front of your eyes as they realize they are not alone.”

Currently, the ministry works in five male prisons and two female prisons in the state. Jim Key, member of the International Council of Kairos and coordinator for Kairos Oklahoma said one of the biggest challenges is finding enough volunteers so that the ministry can expand to more prisons. He said so far, at least 3,000 inmates have participated in the program.

Key joined the organization in 1994, when he and his wife participated in a Kairos weekend at the McAlester prison. He has been with the ministry ever since. “We say we were given life without parole,” he joked. Key and his wife saw how the men changed when they took part in the program. “When they came in, they would have kept fighting one another and by the end of the weekend they were helping one another and supporting one another.”

Toward the end of the Kairos visit, each inmate is handed a sack of sealed letters, an incredible treat. The letters are personally hand-written, one from each of the volunteers who have participated in the weekend. “We leave the area and sing softly in the background as they read and devour Kleenex. Yes, they have tears,” shares Green. “I used to be afraid of evangelism, but not anymore. We do nothing but love them for four days straight, with no strings attached. That melts the hardest heart.”

Kairos also ministers to women in prison as well as family members who have a loved one incarcerated called Kairos Outside. Female volunteers are needed for both of these programs. Torch is a similar ministry that works with juvenile offenders. For more information about Kairos or to learn how to get involved, visit www.kairosoklahoma.org.

by Lindsay Whelchel
It was more than 22 years ago when Edmond resident Rita Gray-Martin encountered a young boy who was very angry. As a teacher, she wanted to convey to the boy that it was OK not to understand sometimes and that he was loved. To illustrate this particular lesson she decided to write a book. Now,...
Read More  >