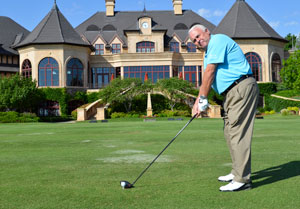 You might think gusty Oklahoma is an odd choice of home base for a professional golfer, but Doug Tewell has called Edmond home for much of his career. He played 20 years on the PGA tour with four wins, and seven seasons on the Champions Tour with eight wins (two of which were major
championships).

Born in Baton Rouge, Tewell moved to Stillwater when he was 12. He used to caddy for his dad on weekends. “Some of my friends said, ‘If you’re going out there every day, why don’t you just play when your dad plays?’ So that’s what we did. We just started playing together,” said Tewell.

Toward the end of high school, scholarship offers started coming in from Arkansas and Tulsa, but it was a run-in with Hank Iba that directed Tewell to Oklahoma State University. When Tewell told Iba he planned to go to college out-of-state on a golf scholarship, Iba said, “We can’t lose kids like you from right underneath our nose to go off to college.” The next day, Iba’s secretary called and offered Tewell a full basketball scholarship. “I never professed to be a basketball player,” Tewell explains. He showed up for basketball practice on the first day, but Iba sent him off to play golf.

“I didn’t really think about playing professionally until I got out of [college] and things just kind of fell right,” he says. Tewell had gone to work as a club pro and didn’t know if there would ever be a chance to play on the tour, but he was given an exemption to play in the 1974 Phoenix Open, made the cut, and won $75. “That wasn’t enough to really convince me, but I got to thinking, ‘Maybe I ought to try this.’”

“Some of the people who I thought knew a lot about the game didn’t think I was good enough,” he admits. “For a year, that worked on me a little bit. In 1975, I quit my job and went to the PGA tour. It was pretty scary.” He had two children, 6-year-old Kristie and 3-week-old Jay. “I had saved some money, so we loaded up the old station wagon and started driving to tournaments… 15 weeks in a row our first time out.”

He ran out of money after about six months, but then received sponsorship from Charlie Dimon, a businessman in Columbus, Georgia who loved to help aspiring golfers and had previously sponsored golfer Tom Kite.

After four years, Dimon’s investment in Tewell had earned him $11,000. After that, Tewell set out on his own. In all that time, he still hadn’t won a golf tournament. The year after his sponsorship ended, Tewell won twice. “My biggest thrill was winning my first tournament on the PGA tour,” he relates. “The ultimate reason I went on the tour was to win… it’s hard to do. The best player in the game only wins four percent of the time, whereas in other sports, it’s much higher.”

Tewell says the most difficult aspect of the game was learning to cope with the pressure of the tour. “It was very difficult when every putt depends on whether or not you’re going to make your house payment or car payment. There’s just so much pressure on you.”

When he turned 50, Tewell joined the Champions Tour and was voted Rookie of the Year. “In my 20 seasons, I think I made about $2.1 million on the PGA Tour. That would be $15 or $20 million in today’s money. When I went on the Champions Tour, it took two years to win the same amount of money,” he said.

“People tend to put athletes up on a pedestal,” said Tewell. He tries to live by something his dad used to say: “It’s nice to be important, but it’s more important to be nice.” Currently, Tewell serves on the boards at First Tee of Metropolitan Oklahoma City, an organization that uses the game of golf to teach important life skills and core values, and FaithWorks of the Inner City. Founded by former Edmond schoolteacher Sally Goin, FaithWorks ministers to families in the Shidler community helping them learn to help themselves. “I win golf tournaments and people clap for me, but I think people like Sally Goin are the real heroes.”

Tewell retired from the tour at the end of the 2007 season, and since then he has played one or two tournaments a year. “I’m going to see if I can play a few more,” he says. “I kind of just renewed my spirit to get back into the game.” Not long ago, Tewell spent four days in the hospital with a rapid heartbeat. The doctor called it a “widow-maker.” It opened his eyes and made Tewell realize he needed to get back into shape and play some more golf. “My heart is fine; it’s healthy, so we’ll see what happens.”

These days, he loves spending time near his grandchildren here in Edmond, but also enjoys the winters in Scottsdale, Arizona. “I could live anywhere. I never had to live in Edmond but we picked Edmond because it’s just a great place to raise your children,” he explains. Tewell is in the Oklahoma Sports Hall of Fame and the Edmond City Hall of Fame. “It was quite an honor. I was taken aback by it,” he remembers.

Tewell’s latest project is the TewellTime Junior Golf Caravan, a summer project he and his son-in-law, Pat Bates are doing in June. They are going to 11 small towns in Oklahoma with public golf courses doing two hour golf clinics for kids ages 8-17 to introduce them to the game of golf.

“I feel very fortunate. I got some good breaks,” Tewell says. “I trusted God to lead my path… I have always depended on my faith to make sure I’m on the right path.”

Tewell’s website, www.tewelltimegolf.com, went live in January. It features a golf talk forum and is a project between him and his son. 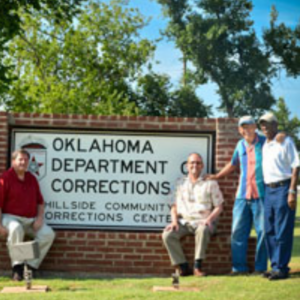 BRINGING HOPE TO THE HOPELESS

by Radina Gigova
When he is not working his day job in the weed control business, Edmond resident John Green is following another calling – bringing hope to those who have none. During the past 10 years, Green has been an active member and volunteer of Kairos Oklahoma, a prison ministry whose mission is to bring a message...
Read More  >