Jillian Whitaker is a woman full of confidence. As the Oklahoma breeze whisks her through the front door of a local coffee shop, all eyes are immediately on her. Her bright purple pixie cut is accented with a figure hugging black pencil skirt and a black blouse. Before heading to the counter to order her latte, she’s stopped by an admirer who offers her a compliment that Jillian is all too familiar with. “I love your purple hair,” the woman says. Jillian warmly thanks her and sits down, opening up about why her look is an important factor in her newfound calling.

“I get that all the time,” she jokingly says. “I don’t have that look of a traditional news reporter. I hate that. Who made up that image?” Today’s popular media seems to be obsessed with image. Television anchors seem to fit a certain prototype: straight hair, flawless makeup, and conservative attire. With one glance at Jillian’s purple ‘do, you immediately know this is a girl who is not used to playing by anyone’s rules. That’s what is special about Jillian Whitaker and her Better Black News media group: she’s creating her own rules and changing perceptions in the process.

“I have an issue with how people that look like me are represented in the media,” she says. “We’re either criminals or athletes. I know so many people that are doing great things that are not being covered because it’s not sensational.” Jillian’s issue with the media’s coverage of the black community mirrors the beliefs of many. In a desire to create a platform to highlight issues and stories that are both beneficial and impactful, Jillian started her own Internet news broadcasting station called Better Black News. It’s been a journey years in the making.

When Jillian was a student at the University of Central Oklahoma majoring in broadcasting, there were some professors that took issue with her appearance. Although she always accepted constructive criticism, she knew her reach in mass media would extend well beyond her hair. Jillian’s goal has always been to connect to viewers through issues and stories that matter to her. Her professors didn’t realize it then, but Jillian’s message and voice would soon garner the hearts and minds of Oklahomans. It would be her powerful message that would make viewers see well beyond the color of her hair and skin. 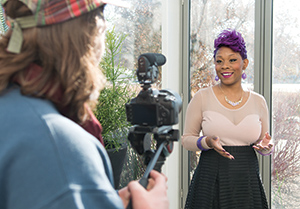 Before starting Better Black News, Jillian took time to survey her target demographic to see how they feel and respond to news stories catered to the African-American community. “Before God blessed me with the idea of Better Black News, I did market research,” she says. Jillian surveyed black people online to garner insight into why minorities do or don’t watch the news. Their ages ranged from 18 to 70-years-old. The response she received was inspiring, but not surprising. “The main reason that people gave for not watching the news was because it’s too negative,” she says. “You’re not giving the audience what they want, need, and are hungry for. You have to cover the positive and be an inspiration.”

Jillian’s desire to provide a positive outlet for black news led her to start Better Black News in August 2015. Jillian was asked to be featured in a blog detailing the passions of everyday people. Excited about the prospect of putting her story in front of online supporters, Jillian happily agreed. There was just one issue: she was afraid to speak about her passion. “I knew that I wanted to talk about how African-Americans were represented in the media,” she says. “But, I felt like that was stupid. I almost didn’t talk about it.” Jillian revealed her internal struggle to the reporter and finally received the confirmation she was searching for. “She told me to just talk about it. We talked and I literally answered my own questions.” The reporter asked what Jillian was going to personally do about the poor representation of black people in the media and the idea of Better Black News was born. 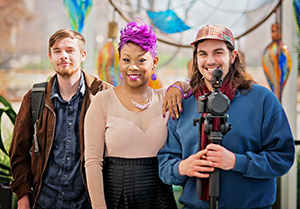 It’s important to note that Jillian created her own opportunity. She is the Chief News Reporter for Better Black News. She has hired two individuals, a videographer and sound technician, to help capture stories. Jillian pays her staff out of her own pocket. She has depleted her savings account to showcase her passion to the world, and she wouldn’t change a thing.

Jillian isn’t going to slow down her process because it’s clear her stories are already making an impact. She recently highlighted UCO’s Black Male Initiative and calls the experience one of her favorites. “They target freshman African-American men to help them come back after their freshman year,” she says. “They created this program to improve the retention rate among young black males at UCO.” The initiative focuses on providing mentoring services, opportunities to be involved in the community, academic assessments and more. As Jillian places her latte down on her plate, she looks up and says something about the experience that firmly acknowledges the need for her work: “Why wasn’t this on a major channel?”

Jillian is helping place responsibility not squarely on the shoulders of news stations, but the community-at-large. She is happy to be creating a platform which makes people of various races and backgrounds proud. “I remind people to be better. No matter what race you are, just be better.” 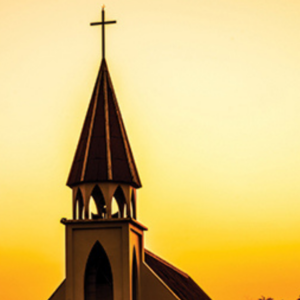 by Louise Tucker Jones
Church has always played a strong role in Louise's life, she remembers how each one shaped and influenced her
Read More  > 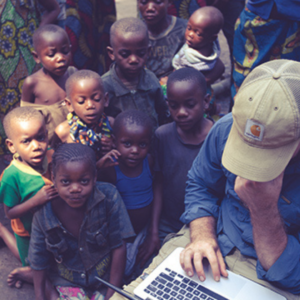