Back to the Battlefield

Billy Terrill rode the muddy waters of the Mekong River in Vietnam toward the battlefield. Beside him, 20 of his brothers in arms were prepared and counting off the moments. Each knew what they would be facing because they’d all faced it before. Exactly 50 years earlier. To the day. To the hour. To the minute. Now, thanks to the Greatest Generations Foundation (GGF) and their War Without Heroes Initiative, they were returning to the site of their worst memory.

“The trip let me go back to a place that was the most traumatic day of my life,” says Terrill, an Edmond resident and highly-decorated Vietnam Veteran. “I went back to see the things I thought I’d never see again, except in my dreams. But, thanks to the Greatest Generations Foundation, I was able to set foot on hallowed ground.”

The GGF, an international non-government organization, was started by Timothy Davis to help combat veterans return to their former battlegrounds, to cemeteries, and to memorials as a way to honor the sacrifice of the veterans, both those who survived their service and for their brothers who did not.

For Terrill, that meant returning to a time he spent in miserable conditions, like sleeping in trees to stay out of the mud and warring with indigenous predators, like snakes, leaches, and mosquitos. It meant returning to a place previously known as a major stronghold of the communist Viet Cong. It meant walking on ground previously drenched in American blood and returning to a day exactly five decades later that took 32 of his fellow company men and 46 Americans in all.

It was June 19, 1967 when Alpha Company, part of the 9th Infantry Division, headed to this particular location outside the town of Ap Bac. As a unit, the boys had been drafted together, trained at Ft. Wiley together, shipped overseas together, and now headed into a day that, together, many wouldn’t live to tell about and those who did would never forget.

As part of the U.S. Mobile Riverine Force, a joint U.S. Army and U.S. Navy force, Terrill and his company were stationed on a Navy ship in the Mekong River and then taken by boat to specific areas in the region no one else could reach. On that day, he and his company had no idea they were headed into a perfect ambush. 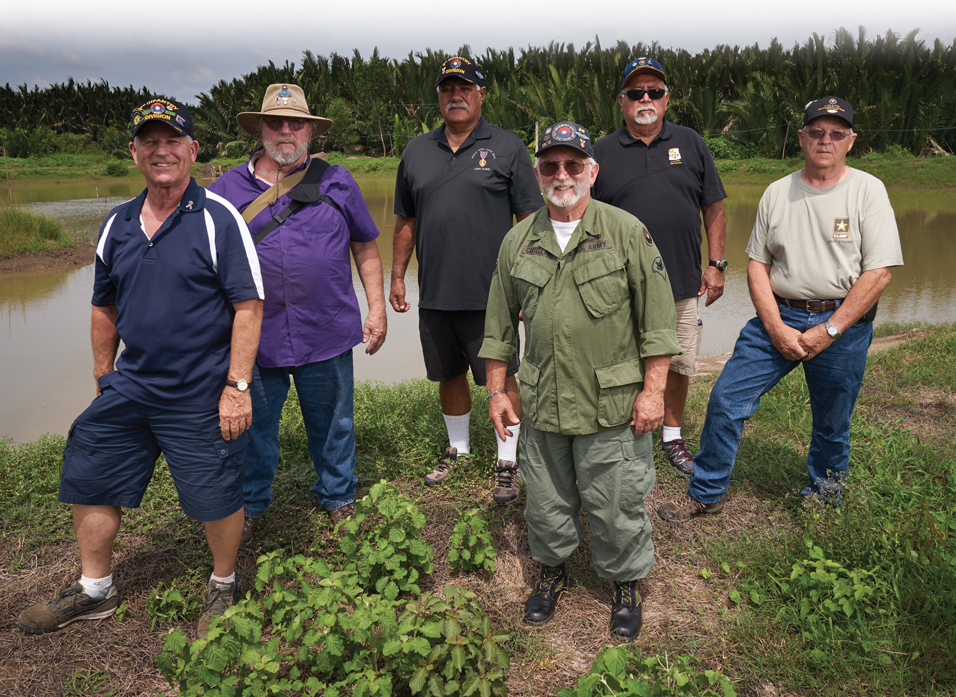 “We were dropped off and Alpha Company walked into an L-shaped ambush. The VC opened up on us and took out most of the company within the first fives minutes,” Terrill recounts.

The men were surrounded on three sides with 50-caliber machine guns, sniper rifles, and no place to take cover. Once the battle began, it went on throughout the night while survivors fought back, hunkered behind dikes, treated the wounded, and continued to do what they were sent to do – take out the Viet Cong, who lost 255 of their own during this battle.

“I could hear the screaming, the bullets, the radio traffic, the helicopter gunships coming in, and the constant artillery rounds,” said Terrill, who was in a canal on the edge of the battlefield and eventually rescued that evening by additional Navy support. “You don’t know what’s happening, if you’re going to get out or what it’s going to be like if you do. You don’t know if you’ve lost everybody. Those poor guys that had to lay there all night long, they were just trying to survive and take care of their brother.”

Returning to that day and that area where Alpha company suffered an 85% loss of life not only gave Terrill a chance to honor his fallen brothers, he said it also gave him a peaceful memory to change his 50-year nightmare.

While there, Terrill attended a memorial service at a museum erected on the very battlefield. He said he was amazed and proud to see the museum, not only honored their own fallen, but paid great respect and admiration to the American soldiers who fought that day, too. He was also able to meet with former Viet Cong soldiers and discuss their shared history.

“I have a feeling of peace now and my brothers have that same peace,” says Terrill, who was one of 21 combat veterans who went on the GGF-sponsored program. “We have a peace knowing we did all we could do in a terrible situation as 20-year-old kids. Our country called us to duty and we tried to make a difference. I expected the people to be apprehensive or even mad, but they weren’t. They appreciate and understand what we did. We got to see that we really did do good.”

by Morgan Day
A skilled dental team that can handle everything in house.
Read More  >