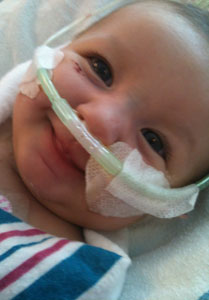 Like most parents, Joel and Cheri Grunow were thrilled to be expecting the addition of a second baby to their family. Unfortunately, the pregnancy also came with some shocking news. At Cheri’s 20-week ultrasound, it was discovered that the child would need to undergo open-heart surgery while still in her infancy.

Baby Anabelle Grunow was born December 8 with a condition known as Tetralogy of Fallot with Pulmonary Stenosis. Essentially, her heart had not one, but four defects that would need to be surgically corrected. One of the defects, a narrow pulmonary artery, was so severe that it measured only a millimeter; those of average newborns measure from seven to eight millimeters.

Tetralogy of Fallot is a very rare condition. According to the National Heart Lung and Blood Institute, it occurs in only five out of 10,000 live births. Affecting the oxygen level in the blood that circulates through the body, these babies often are born blue.

The search for Anabelle’s treatment led the Grunows to California, since Oklahoma currently has no surgeons performing such procedures on infants. They recruited Dr. Frank Hanley, a surgeon at Lucile Packard Children’s Hospital at Stanford University who developed a special procedure to repair congenital heart defects.

Anabelle’s parents were informed she would need to have two to four surgeries, and soon. Though the family was faced with a grim truth, they were not without support. Close family friend and Edmond resident Timber Hindman was alongside the Grunows during this difficult journey. Having a background in social work as well as the Peace Corps, Hindman wanted to think of a way to help the Grunows with their growing medical costs.

Inspired by her brother, a bluegrass band member, Hindman organized a benefit concert in February at VZD’s Restaurant & Club. The fundraiser included a raffle for which they received many generous donations from the community. A bank account was also set up at MidFirst Bank in Anabelle’s name.

In addition, Hindman helped the Grunows create a Facebook page called “Anabelle’s Friends.” There the family is given kind words and encouragement by family and friends. Anabelle’s “friends” are updated with her status and pictures as she progresses through her recovery process.

Today, at 4 months old, Anabelle holds the strength and courage only few possess, having already undergone two major surgeries. She wears a long scar down the center of her chest as her badge. During her first surgery on February 20, surgeons successfully connected her pulmonary artery to the aorta, forcing blood flow in an effort to grow the artery. Afterward, complications arose causing Anabelle’s lung to collapse. Doctors quickly corrected it and, soon after, she was able to breathe on her own again.

Though Baby Grunow has become accustomed to tubes that run along her entire body, she doesn’t let them interfere with the giant smile she wears that reflects even in her big, bright eyes. “She’s a trooper,” says Hindman. “She’s just the sweetest little girl.”

Of course, during times such as these, the strength of the family also gets its chance to shine. The Grunows have coped remarkably well. Hindman notes how positive Cheri continues to be, never leaving Anabelle’s side for a second during her stays in the hospital. “No one wants to see their baby in pain,” says Hindman. “[But Cheri] has remained so strong.” And at her side is husband Joel, who Hindman calls “a great dad and a great husband.”

With her family’s unwavering support, Anabelle continues her regular checkups at OU Children’s Hospital and is currently on a feeding tube, due to her lack of energy. However, her family remains thrilled by the progress she is making.

But, her journey is not over yet. This summer is estimated to be Anabelle’s biggest and most difficult surgery yet. During a procedure lasting anywhere from six to 10 hours, surgeons will attempt to restore normal circulation both to and from her heart.

Though her road may be slightly rocky, the Grunows are fully confident that with the thoughts and prayers of family and friends, Anabelle will make a wonderful recovery and experience most things that any other child would.

Hindman says she is hoping to organize another fundraiser for Anabelle this summer. They hope the community will continue to show their love and support. Those wishing to help can stop by any MidFirst Bank and give to the Anabelle Grunow Fund.