As the city’s elected executive, he’s focused on making the city a place where his children and grandchildren can thrive. 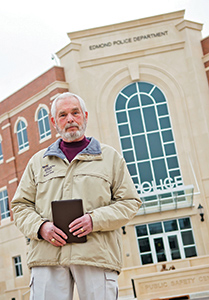 His first priority in the new year is an election with huge consequences for the city’s future. Two sales taxes—a one-cent sales tax and a one-half cent sales tax—both expire in 2016 and require voter approval to be continued. The election will be on April 5th. “My number one project for 2016 is to have a successful extension of both taxes. The election is crucial to continue Edmond’s momentum,” Lamb says. “These would extend current tax rates so we can continue to meet needs and wants of our citizens.” If approved, both taxes would continue for another ten years and would be used to fund a variety of city projects.

Mayor Lamb says that voters can already see the direct results of the taxes they’ll be voting to extend. “Since the approval of the capital projects tax in 2001, downtown has received millions of dollars in infrastructure and utilities investment. We planted the seeds to create a friendly climate with sidewalks, public art and safe sidewalks. Without the tax in 2001, none of that would have been possible.”

Transportation projects are also at the top of the mayor’s 2016 agenda. Construction continues at 33rd and Broadway and is expected to alleviate congestion and reduce commute times for Edmond residents. In addition, the ongoing development at I-35 and Covell Road is another priority. Engineering work and utility plans for the Covell project are complete, and the city expects to begin the bidding process in March. Lamb acknowledges that these projects bring short-term frustration, but that doesn’t stop him from seeing the long-term value they will provide to the city and its residents.

Lamb and his colleagues on the city council will also work to sustain progress on the Downtown Master Plan. Future goals include new investment in arts and culture, development of bike and multi-use trails and the development of a regional transit plan with surrounding communities.

The mayor’s long career as a public servant allows him to see many projects grow from ideas into successful programs. “The most rewarding projects are those that go beyond your expectations,” he says. He cites the juvenile court system as a prime example. “State legislation opened up the possibility, so we worked with the community to grow it into a model program that’s used statewide.” Additionally, the city prioritizes technology. “One of the best tools we have is our information technology, particularly geographic information systems. Our investment in that technology has paid off and is the silent, invisible part that makes this city work.”

Mayor Lamb was first called to public service because of land use issues. He worked as a residential land development reviewer for the federal government, so land use was a professional and personal cause for him. “I noticed that 80 to 90% of what the city council struggled with were land-use issues, and thought I could bring something to the table.” Lamb served as the Ward 3 council member for sixteen years. In 2011, he was appointed to fill the term of resigning mayor Patrice Douglas. He was elected to his first full term as mayor in 2013 and re-elected in 2015.

Lamb’s service extends beyond his capacity as mayor. He serves on local boards and has been honored with awards recognizing his dedication to Edmond. Lamb is a product of Edmond Public Schools and received bachelor’s and master’s degrees from the University of Central Oklahoma. He has been honored as a UCO Distinguished Alumni for Community Service.

He’s dedicated most of his adult life to serving the community, and that dedication shows no signs of weakening.  “When I travel, I’m always happy to come home. I’ve lived the bulk of my life here. I wouldn’t have it any other way.” 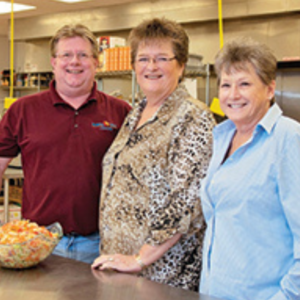 by Kent Anderson
As co-owner of Running Wild Catering, Debbie Lowery has a clear recipe for success. "We're a good, strong, honest, fun-loving company,"�� she says, "and we work really hard to make our customers happy."��
Read More  > 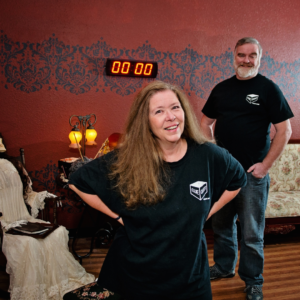 by Morgan Day
All it took was one visit to an escape room and Dan and Michelle Collier couldn't see themselves doing anything other than running one of their own. The couple had been looking for a business venture they could take on together, and the thrill, strategy and creativity they saw in escape rooms clinched it for them. In June 2015, the two opened Clue Quest, Edmond's only escape room.
Read More  >