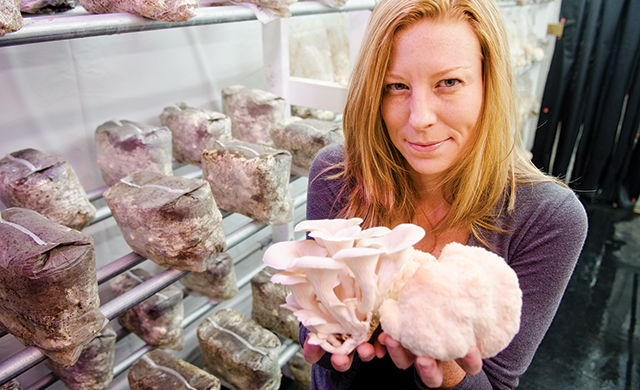 Envision a mushroom farm and the
image of a dark container full of chocolate-colored dirt with bulbous, spongy
mushrooms popping out with their bright white caps and frilly gills comes to
mind.

The reality is much different.
Imagine instead large bags filled with a special mix of sawdust lined on
shelves. The environment is dimly lit and the mushrooms are shaped more like
furry softballs or tentacled masses. Picture all of this inside a retooled box
truck sitting in the backyard of a pleasantly-suburban Edmond home.

Oklahoma Mushroom of Edmond is
sprouting the newest of Oklahoma’s specialty mushroom farms–the so-called “Blue
Rose” of vegetable farming. But mushroom farming isn’t like your typical farm.
It’s part science, part magic, part imagination and a big part of knowledge to
make a mushroom farm both viable and profitable. “The mushroom farm opportunity
presented itself last year,” said Heather Popowsky, owner of Neighborhood
Gardener and the Oklahoma Mushroom farm. “The couple who started it ended their
partnership and was looking to sell. This isn’t your typical soil farm—this is something
completely different and we are aiming to produce 200 pounds of mushrooms a
week.”

Popowsky works her farm with
former chef Robert Wehrle, who acts as the farm manager. The farm currently
grows Shitake mushrooms, Lion’s Mane, White Elm and soon Almond Portabellos.
“We are currently selling mushrooms to restaurants in the area like Local in
Norman, the Coach House, Bellini’s, LaBaguette, Picasso Café and West,” said
Popowsky. “We will also do the farmers markets and markets like Urban Agrarian
and Native Roots.”

The goal is to grow and sell the
spongy delicacies to restaurants and stores, though home gourmets can also
purchase direct. Variety is the key. No button mushrooms here–these are the
crown jewel mushrooms.

Wehrle and Popowsky were
introduced through Matthew Birch at Urban Agrarian market, and a partnership of
fungus was born. Wehrle had a farm in Tuttle where he grew natural, local
produce and has always had a passion for mushrooms. As a former chef, he cooked
in Germany and in Oklahoma City before creating his organic garden. “I’ve
always been fascinated by mushrooms,” he said. “But, leave growing them to
experts. Unless you can positively identify a mushroom, don’t pick it and don’t
eat it.” 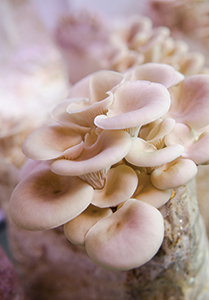 For Wehrle, the mushrooms he
manages are the delicious, lovely and friendly kind. But what grows so
perfectly in nature requires exact science in a controlled environment. “There’s
no such thing as a typical day growing mushrooms,” he said. “I start at 8 a.m.
every day and make the bags.”

Bags? At Oklahoma Mushroom,
special sawdust and organic rice bran are placed in special bags that are then
autoclaved to 255 degrees to sterilize the base. Using HEPA filters, the bags
are cooled and then grain spawn is added and the mycelium (where all mushrooms
come from) are injected. Soon, after sitting in dark, climate controlled
environments, blisters start to form in the dirt where the mushrooms will
eventually sprout. “Once they sprout, the mushrooms will double in size every
24 hours,” said Wehrle. “We get our source substrate from Prague, Oklahoma, the
mycelium spawn from Northwest Microbiological. We build the bags, we sterilize,
we inoculate with the liquid mycelium, we incubate and then we harvest.”

Popowsky, who purchased the farm
with the help of her former husband and local chef Ryan Parrott, owns 70
percent interest in the farm along with her cousin, Jay Thomas. She still
maintains her gardening and landscaping business of Neighborhood Gardener, but
mushrooms are the apple of her eye right now. “I love mushrooms, but I never
thought about growing them until the opportunity presented itself,” she said.
“Because we just started in October, we’re only selling to a few places because
it takes some time to grow and get to our production goals. Our goals are to
grow and sell to as many restaurants and stores as possible. You won’t ever
taste anything as good as these mushrooms.” 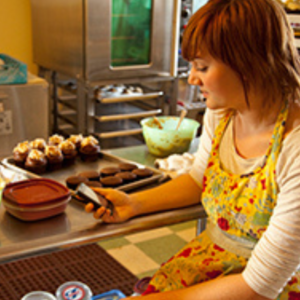 Part of the Plan

by Lindsay Whelchel
How an Edmond Entrepreneur and pastor is building the relationship between religion and technology through a popular app, YouVersion
Read More  > 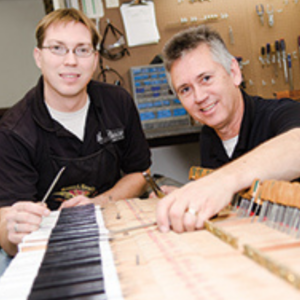 by Lindsay Whelchel
How Bruce Piano is preserving a family tradition.
Read More  >