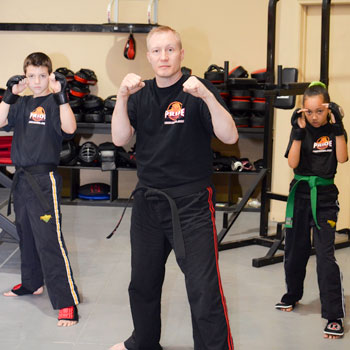 Jason Epps, owner and chief instructor at Pride Martial Arts in Edmond, knows what it’s like to be threatened and want to fight. He grew up in a rough area of Dallas and
was continually threatened by classmates.

As the only Caucasian in a gang-related at-risk neighborhood, Epps said he was the kid that everyone wanted to beat up. “I got chased home and was in a fight every day after school,” he said. “When I first started martial arts, I just wanted to fight. I wanted to know how to beat people up. When the instructor asked why we study martial arts, I said, ‘To fight.’ Another kid said, ‘To be better people.’ I remember thinking that was stupid at the time.”

Now Epps teaches just that in his anti-bullying program at Pride Martial Arts. Above all else, the program teaches youths to develop confidence through goal-setting and testing. The students first learn they can stand up and be confident, and then they are put into situations in class that mimic real-life scenarios. “Confident kids don’t get bullied, at least not as much,” Epps said. “Secondly, we teach them to understand boundaries and to set their own boundaries. Many martial arts schools aren’t equipped and have no training in the psychology of teaching kids to deal with bullying.”

At Lovato’s School of Brazilian Jiu-Jitsu in Oklahoma City, more students are learning how to strengthen their spirit as well. With his legs spread in a strong stance and his body encased in a white gi, 12-year-old Kendle James of Edmond towers over the other boys in his 12 to 14-year-old jiu-jitsu class. Tall with deep, intense eyes set into a round and kind face, he has an adult-like concentration and focus. Kendle sets his eyes on the instructor as he shows him the proper way to do a strike. His opponent is a smaller boy, but Kendle doesn’t take advantage of his height. He knows how hurtful that can be. He doesn’t have to push his own strength, and he also doesn’t have to be afraid anymore.

“My son was being bullied and picked on a lot,” said Haylee James, Kendle’s mother. “He was the new kid. The bullies would try to slam his locker on him, called him names, things like that. Kendle is a kind boy; he wouldn’t stick up for himself.” James turned to Lovato’s and since enrolling Kendle in the martial arts class, she’s been amazed at the changes she’s seen. “He’s developed self-confidence. He knows he has worth,” she said. “Now, he doesn’t care as much about the bullies, and as soon as they found out he was learning jiu-jitsu, they left him alone.”

Kendle isn’t alone when it comes to bullying. According to bullyingstatistics.com, one in seven students in grades K-12 has been a victim of bullying. In addition, 15 percent of all students who don’t show up for school say it’s because of a bully, and one out of every 10 students has dropped out or changed schools because of a bully. Most bullying occurs from fourth to eighth grades.

“It’s about self-confidence and self-esteem,” said Bekah Graham, who runs Martial Arts Ministries in Edmond. “When you enroll in martial arts, it’s not about fighting, but the kids develop a skill set that allows them to stand up to bullying.”

More and more parents are enrolling children into martial arts classes to help combat feelings of victimization by bullies. What their children discover, however, is so much more than just throwing a punch. They discover a way of life that helps not only those being bullied, but even the bullies themselves.

At Pride Martial Arts, Epps teaches “verbal Judo,” which uses words and communication to diffuse threatening situations. “They learn how to block words and deal with the teasing. There are different options besides fighting, but if it does get physical, the students have the tools to defend themselves there too,” Epps said. “There are different kinds of bullying. With the younger kids, they don’t respect boundaries, like taking someone’s toys and not giving them back. With older kids, they can’t communicate effectively, so they get frustrated and lash out.”

Through the anti-bullying program at Pride, students learn self-discipline, self-control, self-confidence and self-defense. “The biggest tool we can give them is confidence,” Epps said. “We teach confidence through goal setting, but we also give them the tools to deal with any situation, whether it’s verbal or having to defend themselves.”

At Martial Arts Ministries in Edmond, 70 students ages 3 to adult attend weekly classes, learning self-defense and the skills of martial arts. Many have been enrolled by parents concerned about bullies. “Some of our students have been horribly bullied,” said Graham. “Quite a few of our students were the video gamers, and they were bullied a lot. Our classes encourage our students to become more confident so they aren’t bullied.”

Fighting isn’t the key, but knowing that one can defend oneself is a big part of the needed confidence. Many times, the martial arts schools focus more on honor and life skills that create not only physical strength, but mental strength as well. Graham knows how hurtful bullying can be, so she has a special mission to help children deal with the problem in a positive way. “My daughter was bullied in pre-K, so this is a problem we’ve personally dealt with,” she said. “We encourage them to speak up, but not to whine. They learn to use the right words. We teach virtues like honesty, integrity and self-control. Usually in the second to third week, we see a lot more confidence in how our students carry themselves.”

Rafael Lovato, Jr., who runs Lovato’s School of Brazilian Jiu-Jitsu, is a lifelong martial arts enthusiast. His father ran the studio before him, and now Lovato and his wife, Tina, teach the skills of Brazilian fighting and philosophy. Students at his school don’t start out sparring. They are taught harder skills, like respect, determination, responsibility and focus. Every month, a life skill is focused on, and the children are given homework like “doing a chore without being asked to” or “do something for someone else.” They also learn self-defense, which includes take-downs and ground positions. Jiu-jitsu is a martial art more like wrestling, teaching kids how to get away if someone is holding or pinning them down. “Brazilian Jiu-Jitsu is a grappling art. It’s about closing the distance on an opponent so he can’t hurt you,” Lovato said. “If you can hold someone down and talk it out, then you aren’t hurting them, but they aren’t hurting you. Having the confidence that you can control a situation and control yourself is what allows kids to not feel threatened.”

Having control and skill means these students can deal with bullying in a much more calm and effective manner. In addition, all students bond through the class, developing friendship and character together, which also boosts their self-esteem, Lovato said. “Right away, they make friends and get involved. The socialization and developing friendships are important parts of confidence,” he said. “We see them start to ask about competitions. They lose weight and feel better. They get better grades in school and they start getting involved with sports. But, with this confidence, they don’t feel the need to brag about it. They are just confident in their ability.”

Martial arts not only helps those who are victims of bullies, but those who bully as well. Kids bully for a wide range of reasons. Sometimes they need a victim — someone weaker or smaller — to feel more important or in control. Sometimes bullies act out because that’s how they’ve been treated by other children or even family members.

“I honestly believe there are no victims, only volunteers. For us,” said Epps, “it’s about showing kids they have value, worth and strength.”