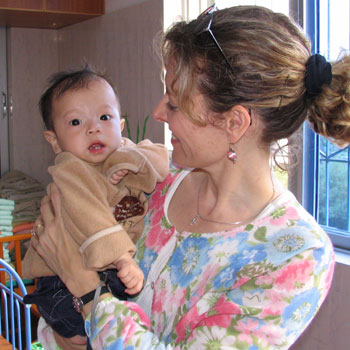 Amy Eldridge believes every time a baby’s life is saved, the world changes for the better. Eldridge is the founder and executive director of the nonprofit Love Without Boundaries, which helps orphaned children in China by providing medical assistance, nutrition, education, foster care and facilitating adoption.

Based in Edmond, Love Without Boundaries works with more than 200 orphanages in different provinces in China and has branches in 13 countries, including the Netherlands, Spain, Ireland and the U.K. About 200 volunteers are directly involved in the various programs. “I still have a hard time believing how big it has become,” said Eldridge. “I’ve been blessed with the most amazing team members.”

It all started with a trip to China back in 2003. Eldridge had adopted a little Chinese girl who was about 3 years old at the time. “She started asking a lot of questions about her life in China and I didn’t have the answers.” Eldridge decided to go back and visit the orphanage. “What I experienced on that trip changed my life forever,” she said.

The orphanage was crowded with abandoned babies. Eldridge saw a baby boy, who was so small and weak that his body was almost blue. “I’ve never seen a baby dying of heart disease before,” said Eldridge. The little boy needed urgent surgery but there were not enough funds for the operation. That day she met four more children who had heart defects and needed medical help too.

When Eldridge returned to Edmond, she couldn’t stop thinking about the children. “One night around 2 a.m., I just pushed back the covers of my bed and went to my computer knowing I had to do something to help them.” She tried to arrange surgeries for the children, who otherwise would have passed away. “I will never forget the two words that I typed into my computer that night all those nights ago, just ‘baby heart.’ ”

She reached out to family and friends for help. In China, the cost of the surgery was the equivalent of $5,000. “We got help from people all over the world for that baby. And instead of raising $5,000 from that initial plea, we ended up raising $60,000,” said Eldridge. This is how the foundation started. The initial money helped save the lives of 12 children. Since then, Love Without Boundaries has directly helped more than 6,000 children and about 2,000 of them have been permanently adopted in the United States.

After the first surgeries were completed, Eldridge was invited to visit the children and see how they were recovering. The local government of the city where the surgeries were performed gave her a flag with words that read in Chinese ‘Love makes no boundaries between countries.’ That is how Eldridge picked the name for her foundation. “I still have that flag,” she said.

Eldridge believes poverty is the main reason why not only babies but also older children are abandoned. “We’ve had children as old as 12 and that’s always so hard,” she said. Plus, there is a very strong stigma surrounding babies born with medical needs. The Chinese government recently revised its poverty line, announcing that currently 128 million Chinese, most of them in rural areas, qualify as poor, living on about a dollar a day. “If they give birth to a child with a heart defect, they would need the equivalent of 15 years of their total wages to pay for the surgery. That is an impossible figure — and so the baby is abandoned.”

The most common birth defect among the abandoned children is cleft lip and palate, followed by heart defects and spinal tumors. Often preemies and babies born with abdominal defects require surgery within 24 hours. Eldridge said cleft lip surgery in China ranges from $500 to $1,000 depending on the province. Spinal tumor operations average $3,000 and heart surgeries around $5,000. The costs include transportation to the hospital and hiring a caregiver. “We honestly see every medical condition possible though — from babies who were burned to children who are deaf or blind or have (cerebral palsy).”

Winter is the toughest time of year for the children and the orphanage staff. Most of the orphanages don’t have heat. Pneumonia is very common during the winter months and, sadly, some babies don’t make it. In addition, other babies are usually abandoned outside and by the time they are found it’s often too late. “It’s easy to become disheartened during the winter season, but I just keep reminding myself of all the miracles that happen every day when a baby is found and we get them to the weight they need, and the surgeries they need, and
then adopted.”

Eldridge said the adoption process of a child with a medical condition could be completed in 10 months. “I tell people all the time, love has nothing to do with genetics. It has everything to do with your heart.” Eldridge is a mother of seven, ages 7 to 24 and her two youngest children are adopted. “Adoption has been the greatest blessing in my life.” All of her children are very supportive and involved in their mom’s work.

“My ultimate goal is to save as many children as possible,” said Eldridge. Among the thousands of lives that she and her organization already have saved was a sick baby boy, abandoned in a very poor orphanage in the Guizhou province. “He was so tiny and weak that his mouth was opening to cry but no sound would come out.” He underwent surgery and is now a healthy one-year-old. Another little girl with a severe heart defect was so weak that the staff thought she wouldn’t survive. “Now she is like a Gerber baby,”
she joked.

For more information about Love Without Boundaries and ways to help, go to lovewithoutboundaries.com.