As my dad and I pulled into Mitchell, Oregon, we saw a small espresso shop on the side of the two-lane highway. Enjoying our fresh peach smoothies, we chatted with a friendly gentleman and inquired about the town’s attractions and sleeping accommodations. He told us about a haunted motel in the middle of town that had appeared on Ghost Hunters. We quickly dismissed that option and considered his other suggestion–camping in the city park in the middle of town. I was a little skeptical and asked him for reassurance. He said, “Well I would know, I am the mayor.”

My 61 year-old dad has always been a wild adventurer, putting his body through extreme tests of endurance. When he asked me to join him on a 40-year bucket list item, to bicycle across the country, from the Oregon coast to the Virginia beach, I dropped everything to follow him in the chase car on this adventure. We had very little insight about what we were in for. Scenic Byways. Treacherous heat. Freezing rain. No Wi-Fi. Small-town America. Could we make it?

We departed for Astoria on June 1, leaving the comforts of home behind for eight weeks. Our journey got off to a wet start in Oregon as we camped in the chilling rain for four days. It became apparent very early on just how dangerous this expedition was. There was almost no shoulder on the two-lane byways, making cycling incredibly risky in the wet conditions.

The route continued through central Oregon, along the Salmon Rivers of Idaho, guiding us upward to Montana. We were greeted in Wyoming by the breathtaking Grand Tetons and continued to head south through the brutal mountainous terrain of Colorado.

Roughing it in our tents was challenging. We camped on a community center lawn in Oregon, through forty-mile-an-hour winds in Montana, in a chuckwagon through a 29-degree night in Wyoming, and on top of a fire ant community in Colorado.

The Kansas plains were a break from the high altitude, but with temperatures over 100 degrees, we finally ditched our tents in favor of air conditioning at hotels and hostels. After we left Illinois, the steep hills of the Ozarks in Missouri were as difficult to cycle as the mountains in Colorado. Visibility was severely compromised by the morning fog, followed by 95% humidity that plagued Missouri on most days.

Kentucky offered white-fenced rolling farmlands that took us through the Appalachians in Virginia. Other cyclists warned us that dogs would be a significant obstacle in Kentucky and weren’t exaggerating. Thankfully, my Dad succeeded in pedaling faster than the dogs could run. He rode about 70 miles daily, or six to seven hours. We reached the East Coast as the mountains morphed into gentle slopes and ended in Virginia’s low, historic cities.

Witnessing small-town America set the tone for the trip. We met small business owners with a lot of heart, and their establishments reflected that. We got to know the compassionate individuals who made these communities feel like home.

Finally, after pedaling 4,228 miles, we made it to Yorktown, VA. We thought about quitting more times than I care to admit. Still, each day we decided to look past discomfort and embrace the growth that comes with any adversity. We took a step back from everything we knew, fully ascended into a new way of life, and discovered how to thrive. My Dad has always taught me that growth does not come from comfort. I witnessed this firsthand and discovered just how much grit and determination he has. I learned to have fun in challenging times and see the beauty that those challenges can bring. Thanks, Dad! 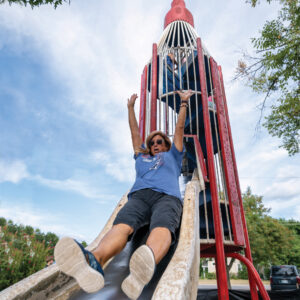 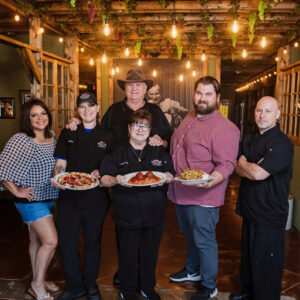