From Skits to a Screen Near You

As classmates and class clowns at Edmond Memorial High School in the late 1980s, Tommy Woodard and Eddie James could only have dreamed of starring in a movie together. Their first major motion picture, Family Camp, comes after 30 years of performing Christian comedy under the name Skit Guys.

In the movie, two completely opposite families are paired together at church camp. The dads, played by Tommy and Eddie battle for the highly coveted camp trophy, while also fighting to keep their marriages together.

“It’s a family-friendly comedy about how messy life can be,” Eddie said. “Most faith-based movies are dramas, but we believe that gut-busting laughter, not preachiness, can help people find hope and beauty within the mess.”

The Oklahoma-based film, which opened in May, is playing in over 1,200 theaters nation-wide, and doing well in California, Florida, and the midwest markets. Much of the movie was filmed in central Oklahoma, literally minutes from Tommy’s home in Edmond. Eddie, who lives in Texas, returned to his hometown for the filming. The church scenes were done at First Presbyterian in Edmond, but most of the camp setting was at Central Oklahoma Christian Camp in Guthrie.

“Part of the movie takes place in a round yurt,” said Tommy. ”We didn’t even know they had a yurt at the camp in Guthrie. And it turns out they didn’t, until it was built for this movie.“ Tommy and Eddie have actually taken to sitting in theaters to observe crowd reactions. “A couple of times, my wife and I thought we would buy tickets and sneak into the back—but it was sold out,” Tommy said. “It’s super encouraging to be in your hometown and know so many people are behind you.”

“Thank you to all our church and high school friends who are supporting Family Camp,” said Eddie. “We worked on this script for years, but every dream has its delays, difficulties, and dead ends. The screenplay was rejected, it was over-budget, and it wasn’t working. Finally, it took our Skit Guys teammates, Brian Cates and Rene Gutteridge, to come up with a fresh plotline.”

“And the president of K-Love radio believed in our ministry and made it come together,” said Tommy. “The amount of support has been humbling. Even our drama teacher from high school, Mary Jane Bartley, came to the movie screening.”

“We don’t really think of ourselves as actors—we’re just two buddies from high school that dream up funny ideas and live out our friendship on stage, and now, screen,” Eddie said. “The hardest part was filming out of sequence. We did all the serious stuff and the final scene within the first few days.”

“In some ways, it was easier than doing our full-length stage skits, though,” Tommy said, “because we shot each scene like six times. The downside is that you don’t get the instant gratification from the audience, like you do in a live performance.”

The Skit Guys are already working on their next movie—but don’t expect Family Camp II, yet. “We’re going to do something completely different,” Eddie said. “We don’t want to get caught in that Ernest Goes to Camp stereotype.” “It was our greatest dream come true to make a movie that can be enjoyed by eight-year-olds or eighty-year-olds,” Tommy said. “Making Family Camp was the funnest month of my Life.”

For more information and videos go to skitguys.com. 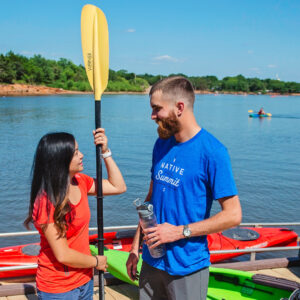 by Maggie Murdock Nichols
Arcadia, Oklahoma is an iconic stop on Route 66. If you’re traveling down Second Street from Edmond, you’ll know you’re close once you pass the longhorn ranch and see the giant pop bottle on the horizon. Arcadia is a small town, only one square mile, but it’s jam-packed with attractions – and more on the...
Read More  > 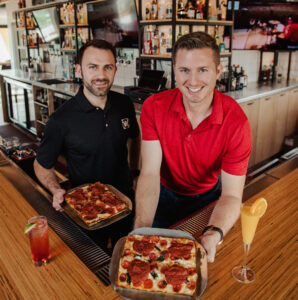 by Laura Beam
If you’ve been wondering where to find the most superb deep dish pizza, the answer is Detroit, MI. But thanks to two guys from Detroit who hated long, cold winters and moved to Oklahoma, you can now find this incredible pizza in Edmond. In March, Keith Kochan and Kyle Schultz opened Woodward Pizza at the...
Read More  >