Jess Wedel earned the nickname “Nak” as she made the journey toward the top of Mount Everest. Naks, female yaks, live at higher altitudes than any other mammal, are unbothered by subzero temperatures, and navigate steep inclines with surefooted confidence. Jess had an affinity for Naks before earning the nickname, “they’re cute, very tough and a little mean if you get in their way.”

Jess and her mother Valari left their home in Edmond to journey to Mount Everest in March of 2021. To their knowledge, they were the first mother and daughter pair to ever attempt the climb. Over the last several years, they completed all the prerequisites without it being a spoken goal. Jess says, “Sure. Everest was always in the back of our minds, but it wasn’t the intention from the beginning.”

No Obstacle too High

Valari fell in love with climbing on a trip to Mount Rainier twenty years ago. On a trip to Nepal with her husband in 2013, Valari made her first attempt to ascend Mount Everest. Unfortunately, their trip was cut short due to complications with their older daughter Colby’s cancer diagnosis.

A few years later Jess developed a rare form of ovarian cancer. She went through surgery and chemotherapy with mom by her side, cheering her on through every obstacle. Colby has since recovered as has Jess. When declared cancer-free in 2016, Jess got serious about climbing, “Having a life-threatening diagnosis changes everything.” The Wedel family has faced obstacles much higher than Everest. Jess and Valari climb in honor and in memory of those who cannot.

The process of climbing Everest is demanding on resources, time, body, mind, and spirit. Jess and Valari spent many days in their tent, hunkered down as they waited for unpredictable weather conditions to pass. Valari recalls, “Those were sweet days. We talked and laughed, but we spent a lot of time in silence together.” They hoped for a moment at the top together.

“I made it farther than anyone thought, farther than I thought I would,” Valari says. Her battle with asthma worsened, and she made the decision to descend early. Jess speaks of her mom with reverence, “It takes wisdom and guts to make the call to leave. Mom values and respects the mountain and her life.” Jess was heartbroken to say goodbye to her mom on the mountain but was determined to keep going.

With the peak in sight, the crew prepared to summit while acclimating at the last basecamp. A few hours before Jess’ summit rotation, a member of the Sherpa crew became ill and the climb was called off. Jess made the descent of Mount Everest in the fastest known time. She donned her trail running vest and ran without looking back. Starting at 17,400k, she ran 35 miles descending 8000 feet in 10 hours and 50 minutes.

Her journey to Mount Everest didn’t end as planned, but Jess was soon back in her preferred higher altitude and ready to climb again. Just hours after returning home from Nepal, she received a call from RMI Expeditions in Washington with a request that she join their team as a mountain guide.

“It’s come full circle to see Jess lead expeditions up Rainier.” Valari joined Jess on Mount Rainier in July and was amazed as she watched her insight and instincts take over, “The climb was flawless, healing in a way. I sat back in awe of her, yet again.” 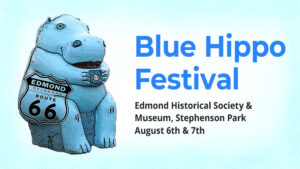 by Dave Miller
Every community along historic Route 66 has its own personality. Edmond has one particularly quirky roadside attraction that has become a bright blue beacon to folks traveling along Broadway—the Blue Hippo!   Much like the blue whale of Catoosa, the hippo is an ironic icon for a town built on the prairie. Which is exactly why...
Read More  > 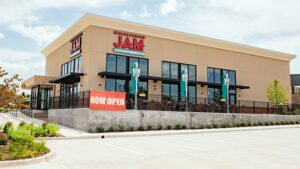 by Maggie Murdock Nichols
Neighborhood JA.M. is now open in Edmond! Serving classics for creatures of habits, decadent sweet takes, freshly made biscuits, sammies and bennies daily from 6:30am to 2:30pm. They’ve found their niche catering to both early risers and the brunch and lunch seekers.  Though this is the concept’s fifth location, Edmond is the first location to...
Read More  >