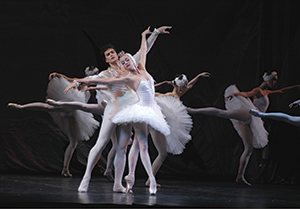 Swan Lake is considered the greatest classical ballet of all time. Seeing Tchaikovsky’s romantic tale unfold in its original form—as it did 137 years ago—mesmerizes audiences. The Russian National Ballet Theatre has not only preserved the original choreography and musical score, but also the historic sets and costumes.

The Russian National Ballet Theatre is making its third visit to the Armstrong Auditorium on January 26th and 27th.  According to Shane Granger, Armstrong’s marketing director, the last two performances sold out, and the same enthusiasm is expected this time.

“People come back because the music is incredible, and the dancers have a level of perfection that is spectacular,” Granger said. “It’s also an intimate experience because the theater is small, with only 823 seats.”

With such a close-up view, the audience can appreciate the large backdrops, done in a Russian art style that is almost extinct. They are so beautiful and intricately made that the company is still using backdrops dating back to the 1960s. Some of the costumes worn on stage also date back