Baby’s Got the Blues 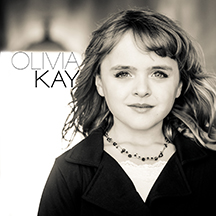 They say you need an old soul
and a history of heartbreak to sing the blues. You need a rich voice, a
tortured note in the songs, a deep understanding of pain, but when young Olivia
Kay sings those soulful songs, her voice booms like an old blues’ pro.

With wide eyes as big and shiny
as robins’ eggs and an easy grin, Olivia is a natural on stage. Her voice rings
out clear and pure, and fear is not a word she knows. Whether she’s singing in
the car or on stage in front of hundreds of people, Olivia knows how to make
magic with her voice.

If you listen to her, it’s hard
to believe that rich, soulful voice is coming from a tiny little girl who’s
just 10 years old. She kills it when she sings Adele’s “Rolling in the Deep,”
“At Last” by Etta James and “Blown Away” by Carrie Underwood.

Everywhere she goes, she
surprises people. “I’ve been singing since I was four,” said Olivia between
bites of ice cream. “I’m not scared to be on stage. I love it!” With big
attitude and a bigger voice, the future of music may belong to a girl still in
elementary school.

“When I was four, my friend Zoe
had a family who loved music. Zoe’s brother taught her to play drums and I’d
sing random words and do beat box and stuff,” said Olivia. “It was just fun. Then
at my birthday party, her mom told my mom, ‘Do you realize how good your
daughter is?’” 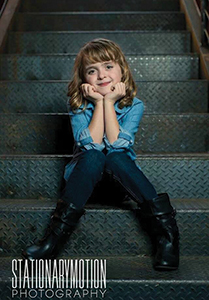 Olivia’s mother, Heather Kay,
remembers that day clearly. She knew her daughter liked to sing whatever was on
the radio, but she never considered enrolling her in private lessons. So
despite the hesitation from the music teacher who said that seven was too young
for private lessons, Heather took the chance.

When Olivia turned eight, her
first public appearance was an audition for the OKC RedHawks at Penn Square
Mall, where the baseball organization was holding open tryouts for people to
sing the national anthem. Olivia was among hundreds who performed in hopes of
standing on the diamond.

“When she got up there to
audition, I think that’s when we really realized how good she was,” said
Charles Kay, Olivia’s father. “People were stopping and gathering around the
second floor balcony. I think they were shocked. She’s so tiny, but she has
such a big voice.” The judges recognized that talent as well. In April 2012,
Olivia sang the national anthem for Opening Night at the RedHawks in front of
hundreds of people. “It was so fun,” the bubbly 10-year-old said. “I can’t even
describe it.”

Word spread of the little girl
with the big voice who could nail the national anthem. Soon Olivia was
performing our anthem for more athletic events and various conferences
throughout the state.

She went on to perform at the
Radio Opry Rising Star Program, the State Fair, the OKC Festival of the Arts
and more.  To Olivia’s family, the
growing popularity of their daughter as a performer was obvious. A friend of
the family suggested they call Rick Garrison of NextStarNow, which helps mentor
and develop local and national talent. “He’s got contacts in Los Angeles and
Nashville, so I emailed him,” Heather said. “He came to the Guthrie Wine
Festival to see her perform, and said he was really impressed with her.” 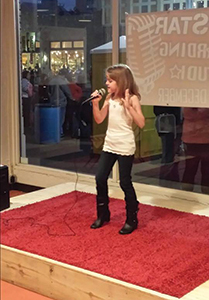 After encouraging Olivia to
enter and win the Voice for the Cure competition and taking second place in the
Edmond’s Got Talent 2013 competition, Garrison’s next step was to take the
singing child to Nashville. In December, Heather and Olivia headed to the city
where stars are born. There, the 10-year-old fearlessly walked into and
performed in legendary venues.

“I was singing at a place called Wanna-B’s,
and the band from Tequila Cowboys heard me and asked me to come sing with
them,” said Olivia. “Nashville was so fun. I wanted to go everywhere and sing.
I wasn’t really scared, I was just nervous they wouldn’t like me because I’m a
kid.”

Though Olivia was accustomed to
singing with pre-recorded music, the live bands brought out even more depth in
her voice. When she left the stages, the little girl was bombarded by fans
offering $10 or $20 for the three-song demo CD.

The Kays took a second trip to
Nashville in January, and fans of the girl followed Olivia from venue to venue.
From Nashville, Olivia and her mom stopped in Memphis where she was able to
share the stage with Barbara Black at Silky Sullivans. “She had one of those
old-fashioned clunky mics. I love those. I got to sing with it, and she gave me
one of her CDs, so I gave her one of mine,” Olivia said. But the performance at
BB King’s in Memphis knocked her into the big leagues. “Finally they called her
up and she sang ‘At Last,’” said Heather. “It was the best song she’s ever
sung. She brought down the house. There were 300 people there and they went
crazy.” 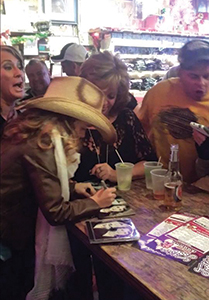 Back in Edmond, Olivia continues
school and has recorded her first original song. Where she goes next is up in
the air, but a trip to visit music producers in Los Angeles is definitely on
the agenda. “My first song is called ‘Go Down Dreaming,’ and it’s kind of like
Sarah Bareilles,” said Olivia. “I learned it quick and I even tricked it out a
little.” What is certain is that singing will be a part of Olivia’s future.
It’s all she wants to do.

“It’s a little whirlwind right
now,” said Heather. “We are taking it one step at a time. Right now, it’s been
fun and an adventure, so we’ll see where it takes her.” 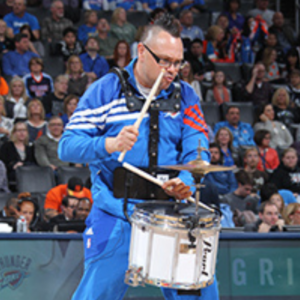 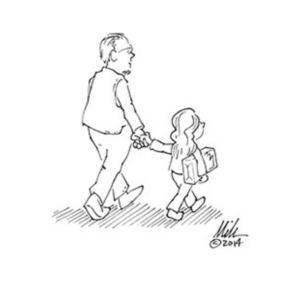 February 2014, In Other Words with Dave

by Dave Miller
Dave is having to let go...
Read More  >