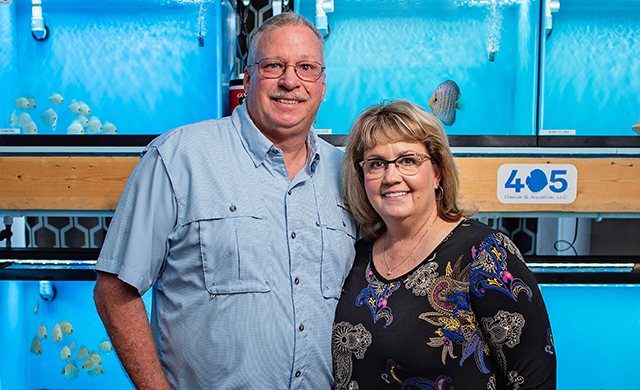 Joe Nelson loves tropical fish. Joe has so many fish tanks in his house that he’s buying a bigger house! He currently has twelve tanks that range from 20 to 200 gallons, but he has 125 more tanks waiting in the garage. Why? It’s his retirement plan. “I’ve gotten good at growing fish to sell, so I’m gearing up to sell a lot more fish once I retire,” Joe said.

After spending 23 years in narcotics law enforcement, Joe is now a construction supervisor. Each night when he gets home, he spends two to three hours cleaning tanks, which he and his wife Dee Anne both describe as a labor of love. Joe’s interest in fish goes back to the 1960s when he was a child. “I visited an amusement park, and they had a game where you would throw ping-pong balls at fish bowls filled with water. If your ball landed in a bowl, you got a fish. I won six that day. When I got home, my grandparents bought me an aquarium, and I’ve been interested ever since,” Joe said.

“After we got married, I gave Joe a 29-gallon tank one year for Christmas,” Dee Anne said. “His sister said, ‘You obviously don