Imagine you are in the middle of a field—the smells, the feel of the ground under your feet, the plants and animals around you. Butterflies and honeybees crisscrossing the air in their search for nectar. Spending time in nature like this has been scientifically proven to improve brain function and benefit overall well-being, but what if you can’t get to the middle of a field in your wheelchair? For those with mobility, hearing, vision, developmental or cognitive disabilities, spending time in nature is sometimes no easy task. 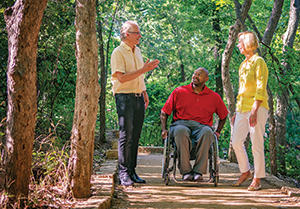 Peter Hoffman, co-founder and Chairman of the Board for Wilderness Matters is part of a team who believes that access to nature is imperative for all people, regardless of ability. “We’re trying to make it easy for everyone to get out into nature and truly experience it. Not just view it— engaging with it.”

Back in 2013, Jack McMahon had the notion to bring the wilderness to all people. After a major bicycle accident left him a quadriplegic, McMahon realized that his disability limited his ability to engage with nature. “He was trying to recover and wanted to help others,” says Hoffman. “He realized that there was really nothing available in a wilderness sense for disabled people to reach out and engage with nature. Approximately 20 percent of the population has some form of disability.” Hoffman and McMahon believed that this population would greatly benefit from enhanced access to wildlife.

The men started working together to find locations, donors and partners to help their vision come to life. “Jack was instrumental in working with the city and reaching out for funding,” says Hoffman. Eventually, they founded Wilderness Matters, a 501(c)3 non-profit founded on their shared belief that time in nature is essential for all. “We settled on Martin Nature Park because it’s a true wilderness preserve,” Hoffman says. The pair believed that the nature center style park would be a better fit for their vision rather than a more structured, modern park.

Hoffman and McMahon proposed beneficial enhancements to the location to the Oklahoma City Parks Department. The department was supportive of the project—with the plan that the park would be adapted with self-funded construction and would then be donated to the city along with an endowment to maintain the enhancements. The men utilized their own knowledge and consulted experts to learn what changes would be most accommodating.

“We worked with people who had all sorts of challenges and abilities to find out what would be most helpful.” Their goal was to make it accessible not only for people who physically were unable to navigate the terrain, but also for those who had any type of impairment that impeded their access to natural environments. 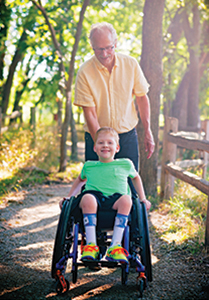 Once they had their list of improvement ideas, the updates were planned in four phases:

“We are trying to make it easy for anyone to get out into nature and truly experience it, not just view it,” said Hoffman. “It’s about engaging, to get a true sense of what the natural habitat is like.”

So, how do you maintain that pristine environment while adding to it? “The upgrades are not designed to take away from the pristine factor of the wildlife preserve,” asserts Hoffman. “There’s a balance between wildlife and mankind being able to interact without either having to leave, change, or die.”

To that end, the improvement efforts have been very carefully planned to preserve the sanctity of nature. “Construction is done certain times of the year so nesting season is not disturbed,” says Hoffman. “Materials are brought in and applied carefully and thoughtfully in order to not disrupt natural patterns of life.” For instance, that new trail surface is made from decomposed natural granite, which compacts into a hard trail surface but is more natural than asphalt.

“Often, people talk about being ‘ADA compliant,’” says Hoffman. “That means it can be accessed but doesn’t offer the full experience. We strive to exceed way beyond ADA compliance rules and regulations, focusing on the principles of universal design,” to see how all the people who might use the adaptations would use them. “Walking, sight, hearing, emotional—people may have all sorts of difficulties that prevent them from accessing nature.” Wilderness Matters is hoping to ease those difficulties and make nature accessible to all.

“It isn’t just about a stroll in the park; it’s about bringing the park alive,” says Hoffman. Wilderness Matters is spearheading the collaboration between nature and technology through their efforts to preserve the natural ecology while expanding access. “We hope that this project can serve as a template for others to run with it in their own way.”

Wilderness Matters would like to thank INTEGRIS Health, Jim Thorpe, US Recreational Trails grant, the Inasmuch Foundation, the Christopher & Dana Reeve Foundation, the Cresap Family Foundation, and all the anonymous and individual donors who have helped them to realize this project. 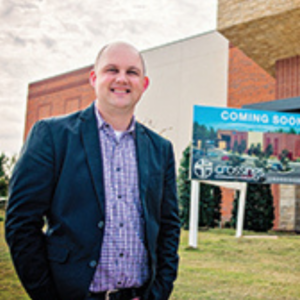 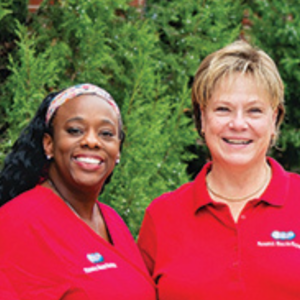