Where There is No Comfort: Seven Days in Ethiopia

When Juliann Troi was asked to write an article about the life-saving work of a humanitarian organization in a small village in Ethiopia, she knew it would be extremely difficult. What she didn’t know was how much the experience would touch her heart.

The article evolved into a book; “Where There Is No Comfort: Seven Days in Ethiopia,” which was released February of this year.

Troi, a writer, artisan and Edmond mom was sponsored by International Crisis Aid, a St. Louis-based nonprofit. They serve areas where other organizations “cannot or would not go.” Angacha was one of those places. The small town is situated about 20 miles south of Ethiopia’s capital, Addis Ababa.

From the challenging three day trip, to the extreme living conditions, everything was a total shock from Troi’s comfortable life in Edmond, Oklahoma.

“By the first day I felt that I had reached my physical and emotional limit,” she said.

Troi’s emotions resembled hues of the Ethiopian landscape. “It was very brown, lots of shades of brown. Even the green was dusty green and everything looked tired,” she said. “The land itself feels ancient and the people look very weathered.”

The people of Angacha live in small round houses made of mud and dirt, about 15 feet in diameter and 8 to 10 feet tall. All of their possessions, including their animals, stay inside. The roads are just dirt paths and most people walk bare foot.

“I thought, ‘there are so many things they don’t have, they don’t even know they are uncomfortable’,” said Troi. “From my point of view, that is a place where there is no comfort.”

Angacha has a population of about 100,000 people. It is one of the hardest hit areas by famine. According to the most recent UNICEF estimates, Ethiopia has a mortality risk of more than 1 in 10 for children under 5 years of age. About one third of children under five suffer with moderate to severe underweight issues.

While she was working at the ICA clinic, mothers were bringing in hundreds of babies, many of which were starving.

“I was heartbroken watching these mothers bring dying babies and knowing they can’t do anything about it,” Troi said.  In one instance, she just started crying, but the interpreter told her she had to be strong and smile because the people needed her positivity.

“They are so lighthearted. They’re amazing and resilient,” Troi said.

Her impressions were piling up as she witnessed everyday life of the village people. “They still live the way they lived thousands of years ago,” Troi said. She saw women mashing grains on big round mats; kids playing in a pond and drinking, while a donkey was a few feet away in the same water. She even played with a little girl who pretended to be a soccer goalie.

One of Troi’s most memorable experiences, however, was one of her first interactions with the locals. On her way to church she found herself alone, surrounded by a large crowd. The people started pressing against her, trying to get closer and she got scared. Then Troi realized the people were just reaching out to touch her as a way to get to know her better. She shook their hands, smiled and answered questions.

“I felt part of their life and started seeing things with their eyes. That was just a huge day for me,”
she said.

Now, back home and thousands of miles away from Angacha, she is determined to make a difference. Troi hopes that her book, “Where There Is No Comfort: Seven Days in Ethiopia,” will raise awareness, challenging readers to help those in need.

“Don’t sit back and watch it happen. Get involved,” Troi said. 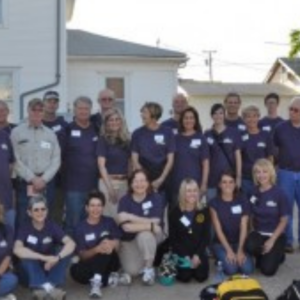