We Can Be Heroes

At New World Comics in Oklahoma City, superheroes are having a discussion. 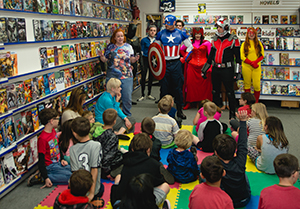 Kit Compton of Oklahoma City is green. From her hair to her face to her dainty fingers, Compton is covered in green paint as the superhero She-Hulk. Next to her, a female Thor played by Whitney Willis trades jibes with Don Rosencrantz’s Captain America and Sam Perry’s Ant-Man.

In all, 15 superheroes are teaching children all about the ins and outs of being super at Superhero School, held on Saturdays at New World Comics. More than 30 children and their parents are lobbing questions at the group, and although the Superhero School is designed to teach children about the characters, it also teaches youth about the qualities that make a superhero.

What started out as a day of dress-up at the comic book store four years ago has turned into a phenomenon that brings together the characters of legends and children, some who are battling life-threatening diseases. 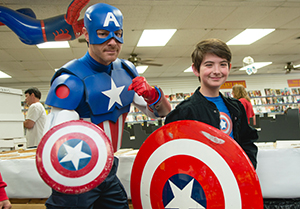 “Every year, we do a free comic book day, and I wanted to do something to get people to come in,” said New World Comics owner Buck Berlin. “Since then, we’ve started Superhero School, and now parents and organizations ask us to do charity events at the JD McCartey Center for Children, schools and the OK Kids Corral.”

For those who don their masks and tights every weekend, the chance to play a hero and a mentor to hundreds of children is a super power all its own.

How Legends Are Made

Buck Berlin loves comics and comic book characters, and although he knew a few people who were already involved in comic cosplay, most of his superheroes were friends who were willing.

“A few dabbled in cosplay, but they mostly hung out here at the store,” said Berlin. “I’d look at the my friends and ask them if they wouldn’t mind dressing up. But as we went on, it’s become more than just dressing up. They have to learn about the character, do research about their history and be able to answer questions.”

Most of the costumes are made by the players or by Berlin. In all, roughly 30 people make up Berlin’s stable of superheroes. While the original intention was to offer a fun way to interact with children, Berlin said Superhero School also promotes literacy by inspiring children to read more about their favorite character. 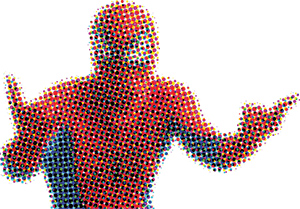 “They also learn about doing good. They see that heroes exist in the world to help people,” Berlin said. “They see that helping people is a good thing.”

For children suffering life-threatening illnesses, a visit from Spider-Man or Captain American can mean more than even the players realize. OK Kids Korral, supported by country music star Toby Keith, helps make life a little easier for children with cancer by providing a safe, convenient and daytime and overnight lodging for pediatric cancer patients and their families.

“We did an event there and one little boy’s final wish was to meet Spider-Man,” said Berlin. “Our Spider-Man at the time was 17, and he went and talked with the boy and played with him. He didn’t know that little boy passed afterwards, but when he found out, he was very touched and grateful that he was able to do that—to give a dying boy his last wish.”

Keri Eakers was among the first superheroes to be recruited. In 2013, Berlin approached Eakers and her husband about becoming involved in Superhero School. 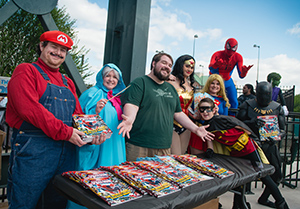 “We started off with a couple of costumes,” said Eakers. “After awhile, we had to learn how to sew so we could make our own costumes. It’s such a fun thing to do, and I feel like we impact the kids’ lives.” Now even their daughter Taloa is getting in on the fun.

“I know it probably sounds corny, but superheroes are something kids look up to, and when it’s done in a relatable way, kids can identify with their role models,” said Marcus.

Ant-Man is another popular superhero, played by Sam Perry. Perry knew Berlin through soccer, but was soon recruited into the fold.

“Buck came to me one day and said, ‘Hey. How tall are you?” He had me put on a Ro-Box suit to make an appearance at a movie premiere of Iron Man,” said Perry. “That started it. I think a lot of kids are reading more because of Superhero School. In my regular life, I own a food truck and I spend all the time in the back away from people. This allows me to be an extrovert!”

Whitney Willis, who played Thor at Superhero School, said she was already involved in dressing up for comic-cons when she was approached. 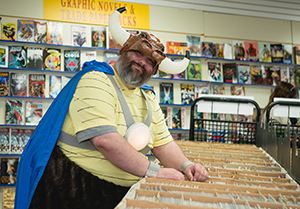 “My friend who knew Buck recommended I be a superhero in Superhero School,” she said. “I thought it was a good way to make dressing up meaningful—you do it for the kids. They just get so excited, and look at you like you are a real superhero. I think we can show every kid that they have to find their own inner strength. That anyone can be extraordinary.”

Kit Compton and Berlin’s wife Keara, who plays the Scarlet Witch, among others, say the events are a good way to introduce fans to lesser-known superheroes as well. 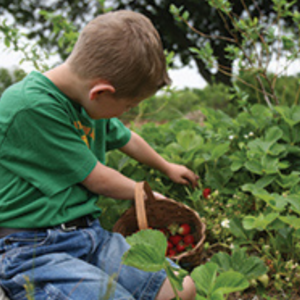