War Relics from the Attic 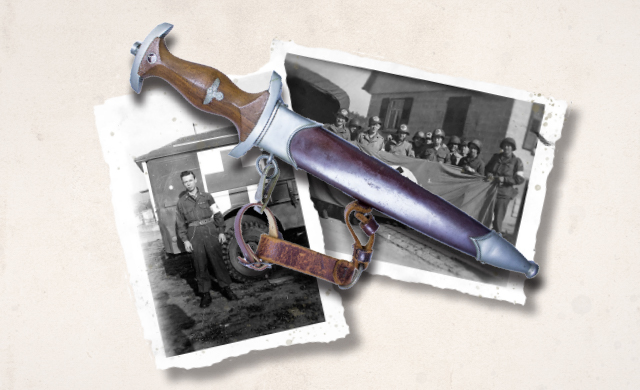 War Relics from the Attic

When Vicki Eckerd and Kathy Radiant found two boxes in the attic labeled  “War Stuff,” they felt relief. Their father, 92-year-old Clayton Barnwell, was a World War II veteran with a purple heart, but at the end of his life, he’d begun to fret about finding his war memorabilia.

“Dad was in the Battle of the Bulge, but he never talked about it when I was growing up,” Vicki said. “After my mom passed away in 1999, he visited the Veterans of Foreign Wars (VFW) center and found out that he could talk about what he’d experienced.”

Barnwell slowly started revealing memories of his military service. He’d left high school to join the war effort in 1943. Barnwell requested the Navy, but since he couldn’t swim, they told him, “You’re going to be in the Army.” He became a medic for a dental unit stationed overseas. A year later, during a brutally cold winter, Barnwell was caught up in the deadliest battle of the war.

He told of the danger. Bullets flying everywhere. 19,000 Americans dead and 47,000 wounded. Barnwell helped the ones he could. He grew emotional as he talked about “the boys” who served alongside him, but also “the boys” he couldn’t help. Vicki thinks her dad kept it all inside because, “You were supposed to be tough. You were just doing your duty–but that war wasn’t like bombing someone a country away. It was hand-to-hand, in the trenches.”

A while back, Barnwell surprised Kathy’s son, Kaleb Berend, a Navy veteran who was visiting from the Navy, with a spontaneous show-and-tell. He walked into the living room holding a hat and dagger from the war. They were items Vicki and Kathy had no memory of seeing before. Afterward, Barnwell returned them to his secret hiding place. He later moved to an assisted living center and his dementia worsened. He began fretting about where he’d hidden his war items, especially the dagger. Vicki and Kathy took turns returning to his house to search, and even took him there to look, but they found nothing.

“By then, Dad had moved into a hospice situation. We wanted to find the dagger because he was obsessing about it,” Vicki said. “In March, two months before his passing, we searched the attic and found the two war-labeled boxes.”

The dagger wasn’t among the items inside. Instead, they found a metal helmet, a swastika armband, a German soldier’s uniform, and a large Nazi banner! Vicki speculates that her dad acquired these items from the German soldiers he helped. “He was allowed to administer medical care to enemy soldiers only after he’d taken care of US soldiers and the armed forces fighting on our side. I know that since he was a Christian, he felt a moral obligation to help them when he could,” she said. “He did used to joke that the first English word the German soldiers in his care would learn was ‘morphine.’”

Kathy continued looking fervently for the dagger, because she knew her dad had previously walked out of the room and returned with it—so the dagger couldn’t have been hard to access. Kathy finally found it, hidden in the family’s secret, unrevealed hiding spot, a place she’d forgotten from her childhood.

“Dad was so surprised when we showed him. His eyes got big and teary. He had a relieved look on his face,” Vicki said. “We took pictures of him with the war items and made a little photo book so he could remember that we’d found them.”

Barnwell was laid to rest in his own Army uniform, which Vicki and Kathy found in a closet. The sisters are taking measures to safely archive their dad’s war memoribilia so that they remain in pristine condition for the future.

“Kathy and I are extremely proud of our dad for serving our country. I think that looking back, we wish we’d paid more attention to his stories, because we’re just starting to understand what an important part he played in American history.”