Turning Loss Into A Win 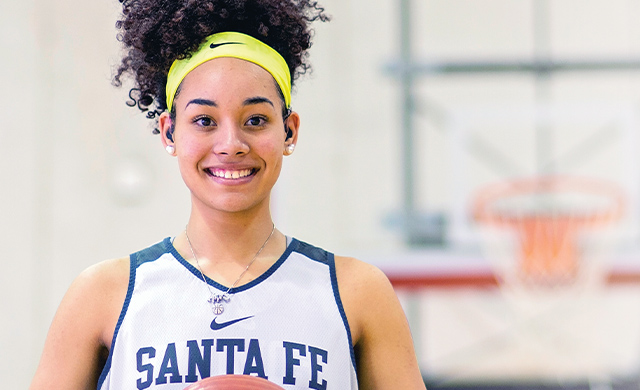 Like other high school students, she attends school and plays basketball. Maybe “normal person” is an understatement, however, because these seemingly simple activities actually prove Kelsey’s ability to navigate some tough challenges. She spent her elementary years in Kansas at a school for the deaf, becoming fluent in sign language. Crossing over into traditional school at a late age was a choice to leave her comfort zone and enter the world of hearing. The reason? Basketball.

In 5th grade, she joined a community-center sports program and tried basketball. She wasn’t great at it. Because she couldn’t hear well, she wasn’t clear on the rules of the game or what the coach was saying–but something about basketball was calling to her, loud and clear.

“She wanted to get serious about basketball, but she didn’t have the language skills to transfer straight into a traditional school,” said her mother, Nalani Anderson. “When I moved to the Oklahoma City area, Kelsey went to live with her grandma in the Tulsa school district, because they have a good deaf-education program. Kelsey had the opportunity to be around both deaf and hearing kids, so her speech and communication improved greatly.”

The summer before her 10th grade year, Kelsey’s mom convinced her that she had the athleticism and physicality to be a good basketball player. To get the training she needed, she had to face the fear of going to an all-hearing school. So, Kelsey enrolled at Santa Fe High School in Edmond. The school provides her a sign-language interpreter. Kelsey also reads lips, but lunchtime conversation is a struggle and the noise on the basketball court is a blur in her hearing aids. Fortunately, Coach Paul Bass, was already using hand signals for plays. When Kelsey enrolled, he simply increased hand signal usage with Kelsey and her teammates.

“At first, my teammates were nervous about me, because they’d never played with a hard-of-hearing person before,” Kelsey said. “The longer we played, they realized they could treat me like anyone else.”

“I remember when she messed up during a game, the crowd in the bleachers went silent, because they were scared of hurting her feelings,” Nalani said. “That’s not what she wanted.”

For two years, Kelsey worked hard to close her basketball learning gap. “A large gap,” added Nalini. “She started very late. We hired a trainer to get her up to speed on the rules and ball basics, but she could barely run and dribble when she started 10th grade.”

“I was a late bloomer,” Kelsey admitted.

Now, as a senior forward for the Santa Fe Lady Wolves, Kelsey recently earned a place on the starting line-up, and she is catching the attention of some college scouts. “That’s such a big leap for where she’s come from,” said Kelsey’s mom, proudly. “She broke into the hearing community, and she’s inspiring other deaf people that you can be hard-of-hearing and still get the education you need to be successful. She’s not disabled. She’s a blessing.”

“I’m blessed by my hearing loss,” Kelsey said. “Don’t feel sorry for me.” 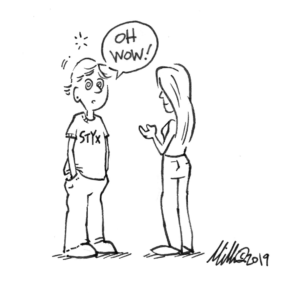 by Dave Miller
Have you ever met anyone famous? That topic of conversation came up the other night while having dinner with friends. I enjoy hearing stories from each person. Sports figures, a newscaster, a famous author – all good tales. When the focus came around to me, I started by asking, “Do you want to hear about...
Read More  > 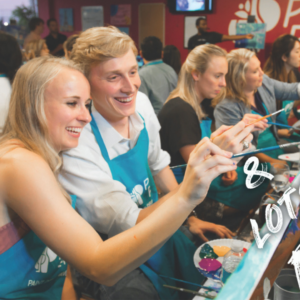