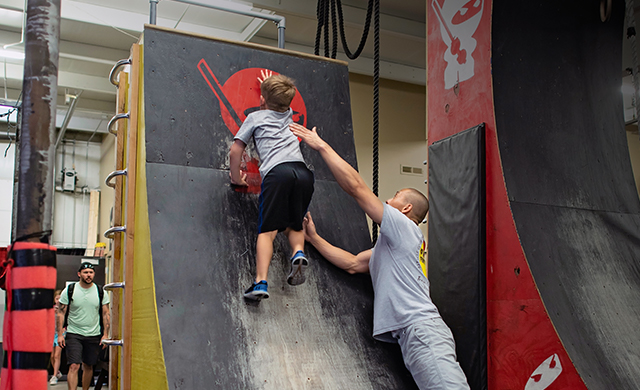 “You move like a Ninja Warrior,” I said to Dominic Pham, owner of Phamily Fun and Fitness. He grinned.

I was an adult spectator at a 6-year-old birthday party. Kids were happily jumping, swinging and climbing on his obstacle course. Dominic demonstrated the next skill, running up a tall ramp wall and trying to touch the top. He lined the children up and encouraged each child to touch as high as possible, adjusting expectations based on the size of each child. Dominic moved with a calm confidence—with the stealth of a Ninja.

“I’ve tried to get on the American Ninja Warrior show three times,” Dominic admitted. “I was so close last year when it was in Oklahoma City. I stood in line for three weeks and placed 16th on the walk-on line, but they only took eleven, and the competition rained out.”

Six years ago, Dominic spent every weekend in Houston, TX, training at the biggest Ninja obstacle course in the United States. As a personal fitness trainer, he was confident in his athletic ability, but he feels like he didn’t understand how to play the “television game.” He walked-on instead of pre-submitting a video application, and he began to doubt that his personal storyline would capture the heartstrings of television audiences. So he modified his plan of action.

“I had it in my mind to open a Ninja Warrior-style training center in Edmond, one where I could train both adults and children,” Dominic said. He quit his day job and worked in the oil field to accumulate the money he needed. He began learning about owning a business and about safety requirements. “Because I build many of the obstacles myself, I have to understand the structural engineering of strength and sway. I actually learned a lot of that in the oil field.”

Dominic has now operated his fitness center for three years, offering personal and group training sessions, plus team-building and birthday parties. His goal is to teach individuals to become comfortable with their own body weight by using ninja obstacles, balance, martial arts and boxing.  He has elderly clients who specifically work on core muscle training and young clients who just want to have fun. Some of his child clients have their sights toward the new American Ninja Warrior Junior television show.

“Although it’s my dream to get a shot on Ninja Warrior, and I’m still training for that in my own gym, I’m starting to think that maybe God has destined me to work with these kids and let them be the ones to shine on TV. I have several that have applied for the show,” Dominic said.

As I observed Dominic with the children at the birthday party, it was clear that he was making adjustments for every child, based on their athleticism. He encouraged the fearful and pushed the fearless. Dominic was endlessly moving ropes, adjusting heights, and rearranging mats. He said that he’s constantly building new obstacles to push his advanced clients and himself further, which works new muscles and prevents boredom.

“I’m very patient with beginners, because they have fears,” Dominic said. “By learning how to land and have nice relaxed movements, you get more comfortable so that you can eventually balance on a circular object or roll out of a fall. Let me show you!”

So that’s how I found myself taking my own personal Ninja Warrior training class. Since I’m not inclined toward athletics, I was a cautious student. Because of Dominic’s confident and calm nature, within the hour, Dominic had me swinging from rings, running up ramps, boxing, and yes, attempting to balance on a large rolling spool—all things I’d never done in my life.

“Changing attitudes is the rewarding part of what I do,” Dominic said. “I want people to learn how to make mistakes and get back up again. Part of the fun is overcoming the fear, attempting the unknown. I want to transform people’s lives, both physically and mentally.”

Believe me, I’m shocked by my new determination to tackle spool rolling again. I wish Dominic luck in his Ninja Warrior pursuit. In my book, he’s already a true ninja with a storyline that I can definitely get behind. He’s helping others push boundaries in surprising ways.

For more information on how to start your training, visit Phamily Fun and Fitness at www.phamilyfunfitness.com 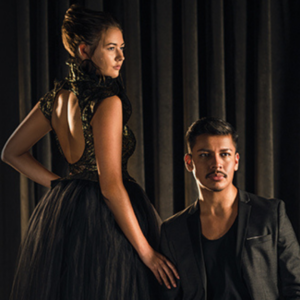 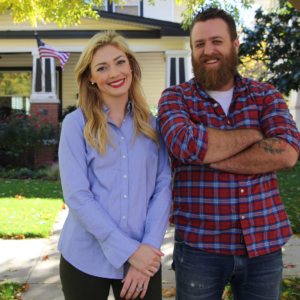