The Vintage Doll, Mimi LaRue, is
adorable in a 1950s-style pink and white dress, white stellar heels and
flesh-toned hose with that iconic black seam down the back. 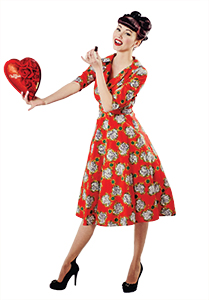 Her lips are as red as cherries
and her eyes flutter with that cat-like swoop of liquid black eyeliner. But
it’s her hair that ties the whole look together. For three hours, Mimi curls,
sprays, pins and again curls her hair until it becomes the perfect, jaunty
rolled style that women favored in the early 1950s. Then she poses for
pictures, and her whole rockabilly pinup girl persona comes alive.

She flirts with the camera,
pouts, smiles and ooh!s when she poses. She’s just simply adorable, with a dash
of sexy and a big ol’ pinch of sassy too.

What’s funny is that she is like
this every day. The pinup model persona is more than an act to Mimi LaRue—it’s
a lifestyle. She goes to places like Target dressed like this, and people love
her for it. In fact, on her Facebook page, more than 300,000 people have come
to love her in just three short years. Now Mimi is on a mission to give every
woman, teenage lady and young girl the confidence to love who they are.

“The style I teach on my page
helps women see that beauty isn’t just one body type,” said Mimi.  “You don’t have to change anything to be
pinup because it fits all body types. Be who you are. You are beautiful exactly
the way you are.” Armed with killer heels and a manicured coif, Mimi wants to change
the world, one shy girl at a time.

“Pinup girls” refer to the
modern day women who adopt the 1920s to 1950s pinup style of
sexy-yet-sophisticated. They appear friendly, don’t reveal too much and the
culture is making its way back to the forefront of pop culture.

“I discovered the lifestyle when I was 16, and
I fell in love with it—the cars, the greaser hair, the girls in skirts,” said
Mimi. “I grew up with my grandma, and she told me stories about being a teen in
the ‘50s, and I just connected with it.” At 16, the quiet little shy
homeschooler fell in love with a whole new look and lifestyle. She studied
everything she could about it and found a group of friends who also embraced
the rockabilly culture.

“It is a lifestyle, not just a
fashion,” she said. “The 1950s were all about hard work, being honest and
genuine and kind. I like the morals of the decade, and I live those morals.
There was a certain lightheartedness about the 50s.”

For three years, Mimi quietly
pursued the new lifestyle, learning all she could. When her son was one year
old, she finally got brave—starting her Facebook page. Then, using the timer on
her camera that was propped up on her son’s stroller, she took a series of
pinup photos of herself. Although the page was up, the traffic was low and the
site sat quiet for about a year.

“It wasn’t until I got my first photo shoot
that the traffic picked up on my page,” said Mimi. “Now I share tips about the
lifestyle, make-up and hair, But I also share things that give women the
strength they need to take on the world. Now, I get 500 messages in my inbox,
and I try to answer every single one of them.” 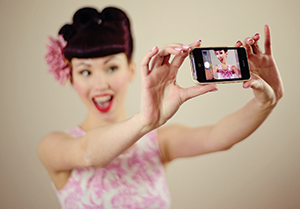 “I never thought I’d be a model
or an inspiration, so it blows my mind that people think I’m cool enough to
follow,” Mimi says. “My page now has women, little girls and teens who follow
me. I teach women how to develop a pinup wardrobe on a budget and give tips,
but I also teach body acceptance and self-love.” With so many followers, Mimi
is now an inspiration for women around the globe. Posting pictures and stories
that women send to her, she helps connect women to each other in a pinup
community.

“I never thought it would be as
big as it is now,” said Mimi. “I’m just a mom. Just a real girl. But if I can
do something and share something that gives other women strength and
confidence, you’d better believe I’m going to do it. I just love it—it’s the
bee’s knees.”

Featured in magazines and also
writing a few columns for magazines such as Lash & Ink and Pink Bow Cities,
Mimi has now become a leader in the pinup lifestyle. “I don’t do it for money.
I live this way, so I just don’t know how not to do it,” she said. “I would
like to take what I’m doing and show others that they are worth something.
Women don’t need to let anyone steal their beauty from them. Whether you’re 98
pounds or 300, you are beautiful.” 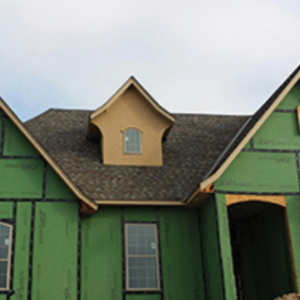 The Houses that Debbie Built 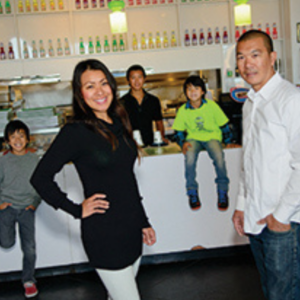 by Laura Beam
You're probably part of one of the most explosive dining trends that has emerged in this decade and you may not even know it.
Read More  >