The Tiny House We Built 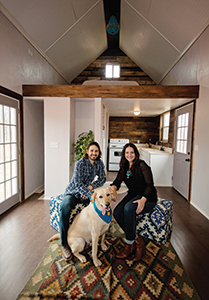 Can you imagine living in a 228-square-foot house? Tiny houses are sweeping the nation, and the idea captured the imagination of a twenty-something couple in Oklahoma City.

Jill and Corey Hogue are putting the final touches on their new tiny home, and they have no qualms about living in close quarters. For them, the goal is simple—to live the simple life.

Committing to a tiny house and building it themselves was not a radical decision. It was the result of a series of life events—some current and some from childhood—and all indicated that the choice to build small met the Hogue’s hopes for the future.

“We’re building a life together, and it’s mortgage-free. We’re not going to work our life away to pay a big house bill,” Jill said.

On October 1st, the Hogues bought their first load of lumber. Now, the structure is mostly complete, costing less than $10,000 to build. The footprint is 12×24 feet with a 288-square-foot floor. A raised loft bedroom adds 120 square feet of surface, and the 17-foot tall ceilings—despite being done on accident—make the space feel roomier than expected.

“At first, we freaked out when things didn’t go right,” Corey said. “Now it’s like, ‘Oh well, we’ll cover it up with trim.’”

“But it’s our house, and we’ve built it, so the changes are all meaningful to us. We may or may not live in it forever, but it’s paid for and we’ve learned so much about each other in the process.”

In some ways, the tiny house has been accomplished like an old-fashioned barn raising, because the Hogue’s family and friends have pitched in to help every step of the way. Cousins, parents and grandparents have dropped by to contribute their skills, whether it’s pounding nails or assisting with plumbing.

“Building this house has brought our families closer together,” Corey said. “Everyone has contributed ideas.”

For Jill’s parents, the experience is a bit like déjà vu because they also built their own home. As a child, Jill remembers helping gather rocks to add to their stone house. “My family was proud of what we built,” Jill said. “Now, my parents are seeing me do almost the same thing on a tinier scale.”

Corey had a different childhood experience, growing up in large houses. He remembers walking through multiple rooms in order to talk to his parents on the other side of the house. He looks forward to raising a family in a small space where he can spend closer quality time with them.

“If we decide to add onto the house as we have children, we’ll have plenty of room to do that,” Jill said.

The Hogues are already adjusted to limited space, as they are living with Corey’s parents during their house construction. They put a lot of stuff into storage that they no longer miss. She’s looking forward to unpacking and eliminating most of it.

“My mother-in-law painted me a glass sign that says ‘Keep it Simple.’ It’s my motto, now,” Jill said. “I want to live life simply and efficiently. To save our money to do fun things, not to have stuff. We’ll be able to travel and afford some land for cattle.”

Land. It was the theme that came up over and over while the Hogue’s talked. They both admitted that they wished they could live in the good old days.

“I guess you could say I’m a homesteader at heart—I want to live off the land. I want to garden and know where my food is coming from,” Jill said. 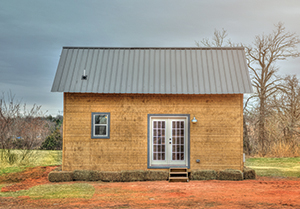 Unlike the homesteaders who started with land and then built a house, the Hogues are doing the process in reverse. They’ve built the house first.

“Buying land that already has a house is more expensive,” Jill said. “And you’re looking for the land you want and the house you want,” Corey added.

“So when the perfect time came to sell the house we were living in, we toyed with the idea of getting a mobile home until we found the land we wanted,” Jill said.

“Then I saw the TV shows about tiny homes,” Corey said.

“Corey’s mom is an architect, and my dad is a handyman, so we decided we could do it,” Jill said. “We’re building our house 200 yards from my in-laws’ house. When we find the land we want, we’ll move it there.”

The five-month building project has certainly provided challenges for the Hogues, especially because of the winter weather, which Corey laughingly described as the ‘archenemy.’ The Hogues are proud that much of the house is made of recycled materials and that they’ve paid cash for everything else. The nearly-finished house, with its mis-measurements and creative trim work has been an inspiration to other family members and co-workers, who are beginning to see the appeal of living without a mortgage.

“The best thing about building our tiny house has been seeing people working together—like the old days when you relied on family and friends,” Corey said.

“We’ve been sponges, soaking up knowledge,” Jill said. “We’ve learned so much, and that has been the greatest gift in building our tiny house.” 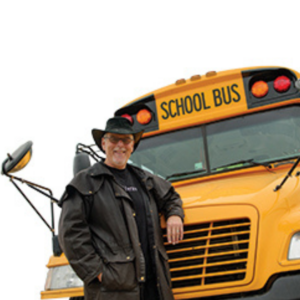