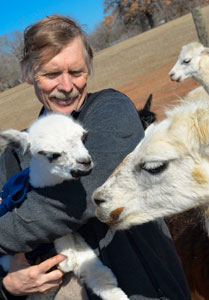 Many people can describe their professional existence in a simple word or two. Writer. Accountant. Teacher. Doctor. There may be a few true Renaissance men and women left amongst us. But, a few come close. And often, you find them in the most interesting vocations. Meet Steve Hull, Ph.D. — animal scientist, medical school professor, biomedical engineer, academic researcher and now, alpaca farmer.

“You know what Ph.D. stands for, right?” Hull quips. “Post hole digger!” Indeed, each day Hull is manager, ranch hand, janitor, dietician and even animal midwife when necessary. And he couldn’t be happier, even finding humor in the track his life has taken. “I used to watch (David) Letterman. Now I listen to the ag report,” he says.

Hull’s story begins on a small New England farm where he grew up raising a variety of livestock. His love of animals inspired him to earn a degree in veterinary and animal sciences from the University of Massachusetts Amherst. He soon found himself pursuing a career in academic medicine, earning a second degree in biomedical engineering and ultimately obtaining a Ph.D., studying physiology and biophysics. Eventually Hull made his way to the University of Oklahoma as a professor, teaching cardiac surgery, publishing extensively on neurocardiology and lecturing at universities across the country.

In 1998, despite his intense workload, he took an opportunity to partner with a friend in founding a small alpaca farm. By 2001, he realized he was enjoying his time on the farm enough to make a daring career change. “I always told my students, ‘When you don’t enjoy what you’re doing and like doing something else, do something else!’ I simply took a bit of my own advice,” laughs Hull. His wife, Dr. Kathy Reilly, a family physician, and children Tom, David and Katy joined in the new venture.

An alpaca is a smaller relative of camels and llamas — too small to be a working animal. While some people raise alpacas as pets, an alpaca’s real value is found in its fleece. The very fine, cashmere-like fibers are much softer and warmer than sheep’s wool, and can be spun into yarn to make hats, scarves, gloves, purses, coats and other clothing. A single alpaca can supply four to five pounds of fleece each year that can be used to make hundreds, even thousands, of dollars worth of goods.

A typical day on an alpaca farm is far from typical. For starters, one must prepare for a lot of hoofing — pardon the pun — as in nine-plus miles of walking daily. Up by 5:30 a.m., Hull’s day starts with a quick check of the herd. Very gentle and clean animals, even the herd of 60 to 70 alpacas doesn’t smell. Still, the barn needs to be cleaned out daily, so the animals are let out to pasture along with a few guardian dogs. Hull will check on the herd several times throughout the day, which is otherwise filled with the endless sort of tasks that greet any farmer or rancher. Every April, the alpacas are shorn, and though they are native of the high altitudes of Peru and western South America, they adapt well to Oklahoma’s hot summers. When he’s not outdoors, Hull usually can be found on the phone or answering emails from around the world. His “quiet farm lifestyle” seems anything but.

Hull is an expert source for others interested in raising alpacas and has been conducting seminars worldwide for more than a decade. Some seminars are geared toward laypeople at civic luncheons and similar events. These “stories from the farm” are entertaining tales with heartwarming and inspiring morals. Other seminars focus on the intricacies of raising alpacas, with information on nutrition, breeding and care. Hull relies heavily on his experience in engineering, animal science and medicine for these messages.

Hull and partner Tom Cameron run Timberlake Farms, an excellent resource for the alpaca farming community. In addition to maintaining a herd and selling alpacas, the farm works with other farms in operating a fiber loom. The farm sells the fiber and fleece-made goods on site in addition to distributing the goods via a nationwide alpaca co-op. Timberlake Farms, located five miles north of Pops on Route 66, also welcomes visitors.

“Alpacas sell themselves,” says Hull. “The belief that all alpacas spit is no more true than to state that all dogs bite. They’re great animals. My only alpaca mistake was not starting this career 10 years sooner!”