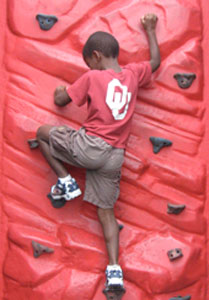 The little boy, we’ll call “D,” is 8 years old. His hopeful eyes peering out from under a mop of dark brown hair will endear him to you instantly and his self-awareness just might astound you. What he says, however, could break your heart.

His words, about behaving well and finding a home, about his future, and about change, are well beyond his years, but they speak volumes to what he has endured in his young life.

He and approximately 15 other boys at any given time live at a family-style group home for abused and neglected boys age 6 to 12 called the Genesis Project. The home and nonprofit organization, located just outside of Edmond, formed in 1985.

Executive director Todd Madland came aboard the organization in 1987 and describes the idea for the project as one that formed from an increased awareness in the ’80s of child abuse issues in the state. With that awareness came the realization that there were few options for young boys of that particular age group who had been sexually or physically abused. The problem is still an issue today, Madland says. The group home, which contracts its beds out to the state Department of Human Services, is at capacity almost 100 percent of the time. Madland adds that as a result, young boys are ending up spending long periods of time in hospitals or bouncing around from one foster care situation to another.

“If you’re six and you’ve spent three years in a psychiatric hospital, you’ve missed a big chunk of your childhood which has already been really damaged by the fact that the people that should be taking care of you have hurt you,” Madland says. Regularly, the boys have lived at 16 other places before their long road took them to Genesis. Those places, whether from behavioral or other issues, simply did not work out, Madland explains. “I think what happens is the kids are abused so traumatically so early on that you don’t recover from that very quickly, so a lot of people just aren’t prepared for that,” he says.

It is perhaps this bumpy road that has prompted D to be concerned with holding himself accountable for his behavior. He says that he has been working with his therapist, one of which the boys see regularly in their treatment program at Genesis. “I’ve been learning about controlling my anger, seeing if I can have a home to live in,” he says.

While he may be learning that his actions are in his control, what happened to him certainly was not, and that is something Keith Speers is adamant that the boys know. “I would like the boys to be proud of themselves and know they can lift their head up high wherever they end up in life,” he says. “They don’t have to be ashamed of what happened to them because it’s not their fault.”

Speers is one of 27 employees and works hands-on within Genesis’ 24-hour care system as a trauma rehabilitation specialist. He says that there are both great challenges and rewards in his job. One challenge, he explains, is the task of reshaping the children’s way of thinking. “Trying to get away from thinking that people want something from them at all times, because these boys, that’s what a lot of them think,” he says. “To know that you’re genuinely trying to help them, that you don’t want anything from them,” Speers says of his goal.

Speers says the rewards to working at Genesis are many, but laughs when he says playing with the boys and getting to act like a big kid is one of them. And if anyone knows the importance of getting to act like a kid, it’s program coordinator Reggie Richardson. Richardson has been working with Genesis for the past 18 years and organizes the activities and outings for the boys. During free time the program institutes recreation opportunities, from going out to arcades, swimming, and going out to eat, in an effort to socialize the children and let them interact with other kids their own age. Richardson emphasizes the need to let the boys be kids again. “They’re just trying to figure out things and learn and make their way. They haven’t been taught a lot, so that’s our job to teach them and hopefully they’ll get better,” he says. He adds that they are always in need of funds to be able to expand their outing options for the boys.

Madland echoes this sentiment. “We’ve had a few hard years fundraising-wise,” he says and adds that they hope to do some renovations and eventually build a gymnasium for the kids. In addition to funds, they can always use help with other things. For example, they are still trying to clean up from the ice storm of last year, Madland says.

With DHS funding 85 percent, that leaves the other necessary 15 percent of funds up to donations. And that work is very concentrated, says Madland, who explains that Genesis ideally likes to keep the boys in the program at least two years and then through DHS the boys will be able to find therapeutic foster homes or adoptive homes to go to. It is during this time that focusing on academics is important, he says. To do this, Genesis contracts with Edmond schools to provide two full-time teachers. “It’s not unusual for a boy to come here and make up three years of school in one year, just by getting really excited about school. If it wasn’t for that, if he was just bouncing around from other places, he may not get excited about school,” Madland says. Time, he adds, is of the essence, in starting rehabilitation and academic focus at as early an age as possible. “Kids are really good, given structure, given therapy, given lots of nurturing and a predictable environment, kids can change.”

And it is this change toward a better future that Genesis has instilled in D. He giggles and says he wants to be a “plunger,” meaning plumber, when he grows up, his amusement of the task stemming from his love for helping out around the house.

A fundraising event is being planned for May 1 at the Chesapeake Boathouse.For more information on how you can help, go to www.genesiskids.com.